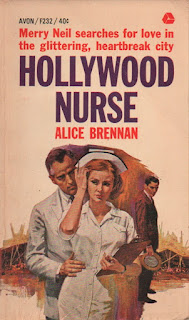 Merry Neil, private nurse to the “King of Hollywood” finds but nearly loses brilliant, handsome Jeff Morrow in the heartbreak city. Her love is threatened by Natalie Pries, moviedom’s beautiful, spoiled darling, and the romantic tension builds and builds …

BEST QUOTES:
“Everyone who comes to California has to drink orange juice. It’s part of the protocol.”

“‘He didn’t try a pass or anything like that.’
“Tammy said crisply, ‘I’d feel  insulted if I were you.’”

“We all live by ourselves. I mean, when you come right down to it.”

“Who wanted a big, husky girl anyway? Not men, surely.”

“One thing that always ruins a conversation is somebody getting serious.”

“What she needs is the kind of guy who’d sock her any time she got out of line. She’d respect a guy like that. But she was born with a beautiful face and that louses everything up.”

“Don’t you know blushing is passé?”

“One thing I’ve found out,  nurses don’t need to diet. They run it off!”

“‘It isn’t fair for nurses to be as pretty as you two,’ he chided. ‘It makes people want to be ill.’”

“How can you get romantic about a girl who has to stick her tongue out first thing so you can get a look at her throat or intestines or something?”

“‘Do you know what I really like to drink?’ Natalie asked her. ‘Milk. I mean, really, isn’t it ghastly? Can you imagine something like that getting out? “Sex queen admits she drinks milk”? I mean, really!’”

“Southern California in the smog would make a great background for one of those old English horror movies.”

REVIEW:
Author Alice Brennan brought us a triplet of nurse heroines in Nurse’s Dormitory, and here she earns another B+ for her second trio with the incorrectly singular Hollywood Nurse: By my count, Merry Neil, Agnes McLeod and Tammy Moore are more than one. As stories go, each character is less than a whole, though, so maybe not much more than one.

Merry Neil is the ostensible star of the book, and she’s a fairly bland lass who as roommate Tammy grouses, “for a girl who doesn’t want any breaks, and who wouldn’t know what to do with a break, you’re getting them all. It’s a shame you’re so nice, because I’d like to hate you.” For starters, Merry is nursing aging producer Pierson Webb, who’s checked in for what turns out to be metastatic cancer. Then, in attempting to escape the paparazzi who chase her down for an update on Pierson’s status, she’s picked up by a strange man in a white Jaguar who turns out to be famous crooner Arch Heller. She ends up dating Arch’s lawyer Tom Harton, who had been squiring young starlet Natalie Pries. It’s true that for a  lowly nurse, Merry does land undue attentions: She’s stalked by both Natalie and gossip columnist Mai Hinge in addition to the aforementioned male celebrities. But to no avail, she swears! She’d fallen for a man back in Michigan who’d turned out to be married, and now, time after trying time, she reminds herself fiercely, “I will not allow myself to fall in love with him. Or with any man. Never, never, never again!” The fact that this means she will be alone all her life never crosses her mind, and her philosophy certainly doesn’t stop her from dating. But all this is irrelevant; we know how her story will turn out!

Next we turn to Agnes, who had married an intern at an early age, but the bastard had walked out on her, not knowing she was pregnant, because “I suddenly realized the enormity of what I’d done. I’d saddled myself with a wife when all I’d ever wanted in my entire life was to become a doctor. So I walked out on her,” Harvey Miles says now when he miraculously turns up as a blind date at the nurse’s apartment in Hollywood, when he’d last seen Agnes in Ohio six years ago. In the interim, Agnes has had a baby, Ellen, who lives in San Francisco with Agnes’ mother—apparently there are no nursing jobs in the Bay Area—and is rapidly dying of a congenital heart defect that Agnes cannot bring herself to acknowledge, much less agree to treat. Once he learns of Ellen’s existence, from blabbermouth Tammy, Harvey forces Agnes to agree to Ellen’s surgery, and what a break for Agnes: “She wasn’t ready to admit it,  but there was almost a feeling of relief in her: She was almost grateful to Harvey for taking the decision out of her hands.” After Ellen’s operation, the rapprochement is pending, even if Agnes can’t admit it. “I don’t know what’s going to happen. I’m not ready to think about it yet,” she says but the pair are not actually divorced, so you can feel fairly confident they will get back together, especially since they have a child to consider. “What she did would depend on what she thought best for Ellen,” and Ellen herself is already growing attached to Harvey. “Agnes watched his head bent over the child’s bed. The word ‘daddy’ was still painful and shy in Ellen’s lips, but she seemed to find delight in saying it.”

The most interesting of the three nurse roommates is Tammy, who only became a nurse “because her mother had thought she should  be one. She wasn’t like Merry or Agnes … dedicated.” Instead, Tammy wants to be … a star!! Her plan on becoming one do not, however, involve trying out for parts or taking acting classes—that’s strictly for chumps!—but to wow famous people with her good looks and be “discovered,” so she begs Merry to ask Pierson to give her a screen test. Pierson agrees to meet Tammy at his house, and the scandal is that he’s planning to put Tammy on the casting couch with gossip columnist Mai hiding behind the curtains to witness and publicize Tammy’s downfall. It’s an interesting dilemma, because Tammy has said conflicting things: “If anybody … I mean anybody … tried that proposition stuff on me, I’d punch him in the nose,” she insists, but then wonders, “Is that the truth? Would I do that? If … if Pierson Webb offered me what I want, a screen test, a contract, and there were strings attached to it, what would I really do?” For better or worse, though, she’s spared the actual test of her character when Pierson changes his mind and “talked to me like a father. He said I should go to drama school and learn how to be an actress. He told me beauty alone can’t get a girl by in Hollywood these days.” Phew! Although the book holds up Natalie Pries as a woman who’d been working in a dinky drugstore when Pierson had wandered in and made her a phenom, so the lecture doesn’t really hold a lot of water.

Then Tammy meets Pierson’s son, whom he’d abandoned decades ago, and wilts into a pathetic, spineless nothing: “She was content just to be with him. And she’d never felt like that with any man before. Always before a man had been there to be used.” Here we uncover the book’s main theme—“what she really needs is to get married to a guy who’s the boss and makes her know it and like it.” Frankly, I can’t imagine any sane woman liking the fact that she has no say in a relationship, but what do I know? Clearly these nurses are all landing  men, the only thing that matters, once they surrender their independence. Two out of the three, anyway—Merry’s man just forces her to admit what she doesn’t want to, that she’s in love with him—before she lands safely in his arms. If this central theme is a bit disturbing, on the whole this is an amusingly written story with one slightly complex character, anyway, even if she’s cut off at the knees in the end. You could certainly do a lot worse than Hollywood Nurse, who’s worth the drive up Mulholland Boulevard.