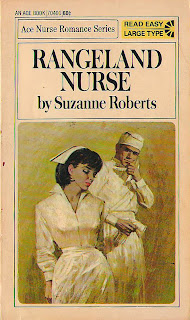 Trudi Dalton left the bluegrass country of Kentucky on a very special journey. On a sprawling ranch set in the deep purple mountains of the West, a little boy named Ricky was confined to a wheelchair. And the young nurse had come to take care of him Trudi soon discovered that her real problem was not in nursing the boy, rather it was in dealing with his father, widower Matt Frazier. For the handsome rancher’s bitterness and indifference to his son provoked Trudi’s fiery temper. Yet, unwillingly, she found herself falling in love with Matt Frazier. Faced with a terrible crisis that would affect all their lives, Trudi would be forced into a desperate gamble—if she succeeded, they could become a united family—and if she failed she would lose both Ricky and Matt forever…

BEST QUOTES:
“Men like girls with tempers, you know.”

“I learned long ago that you can’t sop a woman from doing what she wants to do. Oh—you can tie her up and maybe horse whip her, but if she doesn’t want to stay around, she isn’t going to.”

“I—I’m through making promises about what my talented, noble, sensitive doctor’s hands can do in surgery.”

REVIEW:
Rancher and widower Matt Frazier is not a nice man. He’s rude, bitter, distant, angry, “cold and mixed-up and yes even cruel.” He insists that his ten-year-old son, Ricky, confined to a wheelchair with myasthenia gravis, will be completely cured, though the chances of this are slim—and talks to Ricky “as if nothing else in this world was important, except that he be able to walk again. As if there would be no kind of life for him if he wasn’t made well.”

Naturally, Nurse Trudi Dalton, trucked out to the West to care for Ricky, instantly falls in love with this monster. Even at their first meeting, when he grabs her by the shoulders and shouts at her, “You’ll damned well do what I tell you to!” all she can think of is how “strangely exciting” are his fingers digging into her shoulders, of Matt’s “amazing power and charm.” Charm? Though she thinks that “falling in love with Matt Frazier would be a deadly, heartbreaking business. Might as well fall in love with a cobra,” it’s a short seven more pages before the dope is doing just that. Now, when Matt “barked orders at her, she merely nodded and obeyed.” Several times when he has actually fired her, she goes crawling to him, begging for her job back. It’s positively revolting.

Matt has hired San Francisco surgeon David Fielding to come to the ranch for two weeks to prepare Ricky for removal of his thymus gland, which might improve Ricky’s myasthenia gravis. While he’s in the neighborhood, David takes out Trudi and falls for her, and Trudi finds that “there was a wonderful kind of closeness between them. David was—security.” The surgery, when it finally comes to pass, is complicated by an unspecified problem with Ricky’s breathing that necessitates a tracheotomy, and somehow this means that the thymectomy is a failure, and that Ricky will not improve after the surgery. It also means that Trudi can’t marry David, because now Matt and Ricky will need her back at the ranch. Ricky certainly will, because now his father refuses to see him or speak to him. “My boy might as well be dead as live the kind of life he’s going to be living from now on,” he tells Trudi. “A lifelong cripple leading a dull, useless, futile life!” Thanks, Dad.

So when Matt leaves for a three-week business trip—without saying goodbye to his son, of course—Trudi cooks up a wild plan, to teach Ricky to ride the most dangerous, wild stallion on the ranch, the one who’s constantly kicking down the walls to his stall. It’s “a way to change a lot of things and make them better,” she tells Ricky. I’m not sure I follow the logic, but there it is. And I’m not going to be as patronizing as author Suzanne Roberts is and tell you how this all pans out, because you already know. The ending is as nauseating as such an insipid story deserves, is all I’ll say, and hope that you are persuaded to avoid this brainless novel altogether.

Posted by Susannah at 6:29 PM No comments: 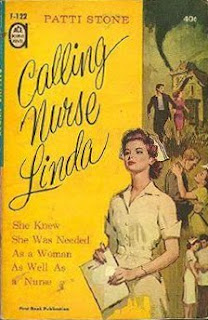 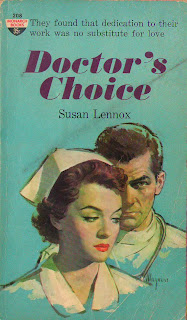 
Dr. Bruce Morrow’s beautiful fiancée laughed when she heard the terms of his uncle’s will. “How utterly absurd,” Nina said. “Of course you are not going to bury yourself in a small Southern town and take over the running of a dinky hospital. Dad will build you one right here, if I ask him to.” Bruce knew Nina was right, of course, but he couldn’t help wondering about the pull he felt toward his late uncle’s home town, the hospital he had left him and Nurse Becky Roberts. He was in love with Nina all right, but he couldn’t help wondering why Becky was constantly on his mind and why his resolve to become a rich, big-city society doctor was weakening day by day.
GRADE: B-
BEST QUOTES:
“It’s a long road we travel, you know, and we can’t find happiness if we get on the wrong road.”
REVIEW:
Another not-a-nurse-novel, Doctor’s Choice nonetheless attracted me for its great cover illustration by Robert Maguire. It’s too bad the story inside doesn’t follow through.
Dr. Bruce Morrow is about to marry Nina Neely (say that ten times fast), the spoiled, demanding, and wealthy daughter of his mentor and soon-to-be partner. But out of the blue an uncle, a general practitioner also named Bruce Morrow who works in the quaint Southern town of Maplesville, up and dies. His will leaves Bruce II a large home and captaincy of the local hospital, which Bruce I had endowed. Bruce II is committed to the indolent path he has chosen as society doctor, we are told repeatedly—but we also find out that Bruce holds “a desire long dormant and never fully admitted. Deep within his heart he had always had a desire to be a country doctor.” Furthermore, “he supposed he was in love with Nina,” a supposition that never bodes well for a couple’s long-term success.
Bruce decides to go to Maplesville as a courtesy, to sign away in person his rights to the estate, which will now fall to the uncle’s nurse, 24-year-old Becky Reynolds, who conveniently lives next door. He’s only planning to spend a day, but as it happens, he witnesses the car accident in which the perpetrator and victim is the spoiled, demanding, and wealthy daughter of the crooked mayor of Maplesville. Cheryl’s arm is crushed, and all the local doctors are voting for just lopping it off, but Cheryl would rather die than lose an arm. Bruce confesses that he’d assisted Dr. Neely in saving an arm in a similar case back home, so his 24-hour stay is dragged out to a couple of weeks while he doctors Cheryl and the other former patients of his uncle, with his trusty Nurse Becky at his side.
And you are not going to guess what happens!!! Bruce falls in love with Becky! But he’s one of those dopey types who thinks that he must go through with an unsatisfying career and marriage, and never mind that “the thought of a lifetime with a girl like Nina was very disturbing.” Though he finds “a richness, a contentment, a feeling of well-being here that he did not think he would find elsewhere,” “his sense of integrity would not let him” back out: “He had promised Dr. Neely; he was engaged to Nina; he couldn’t walk out and say he had changed his mind.” Will he come to his senses before book’s end? The tension about killed me!!!
Well, that was a little snarky, but it’s an irritating question to hang a book on. And you’ll never guess how it turns out!!! So OK, you will, and there’s no precipitating event or revelation that brings on Bruce’s complete about-face; he just walks into Dr. Neely’s office and blurts out the truth, and Dr. Neely just says, “If that’s what you want, don’t let anyone change your mind.” So he doesn’t even have to fight for what he wants, and there are no repercussions—apart from a bitter scene with Nina—that keep him from his intended career and bride. While the book isn’t badly written, and I mostly enjoyed the characters (although there is one bizarre detour in which Becky masquerades as someone else for a bit before she is found out, and this is never satisfactorily explained), in the end I was annoyed by both the book’s central “problem” and its resolution. If Bruce makes the right choice in the end by becoming a country practitioner, the choice you should make is to leave this one on the shelf.
Posted by Susannah at 5:05 PM No comments: