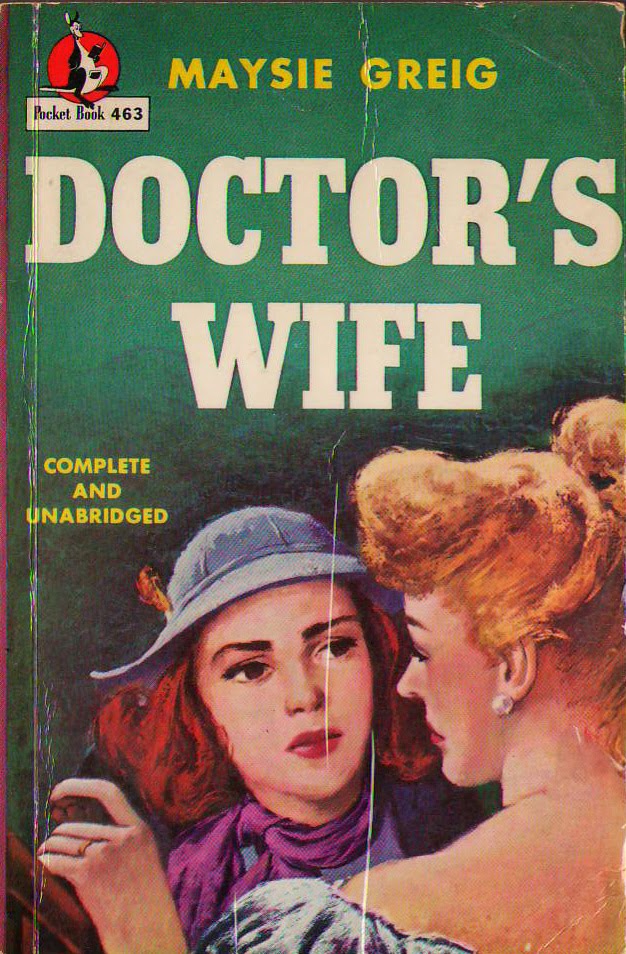 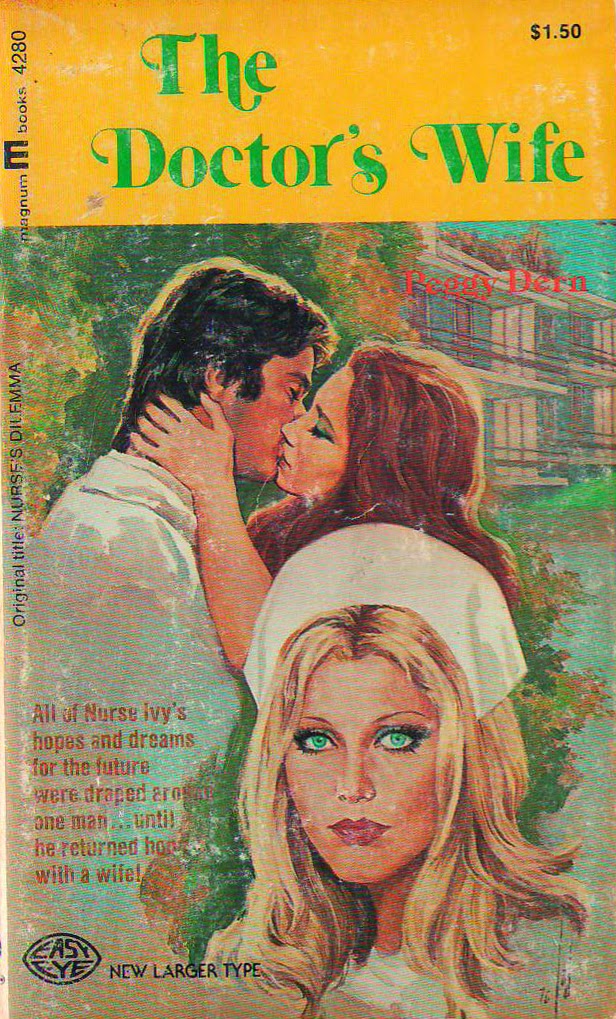 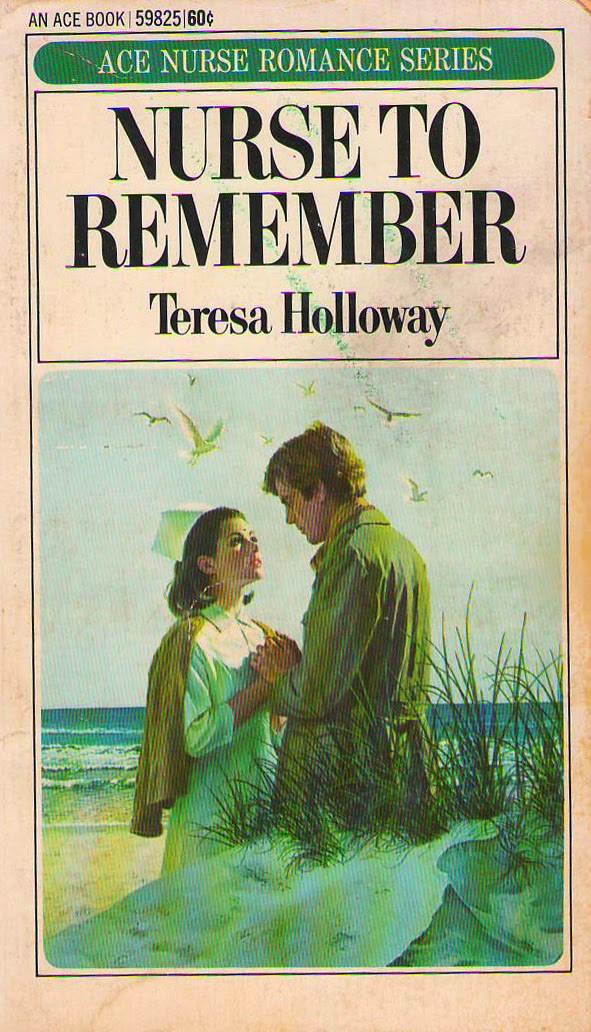 Against her better judgment, Adair Davis let herself be talked into becoming nurse on Dr. Garnett’s secret government project. In that ancient isolated house where it was being conducted, she was both attracted and frightened by the doctor’s assistant, the tall, handsome young doctor, Sam Lennox, whose hostility was coupled by a concealed concern. The phones were tapped, the house harbored mysteries, strangest of which was the unseen presence of a mysterious woman somewhere in an upstairs bedroom. But it was Adair’s feminine heart that was to be the major traitor to her planned flight.

GRADE: C-
BEST QUOTES:
"Even the oxygen tubes in the strong, aristocratic nose did not deter him."

"I always thought the description of the beautiful girl who tended the dwarfs [in Snow White] had far more imagery than anything Shakespeare wrote."
"She had the feeling, and she didn’t like it, that the eye of the Kremlin was fixed on them."
"Here was buried, it related, the body of a little girl, preserved at death in a keg of rum by a father who’d promised the mother to bring her home intact from a journey abroad. When the child died of the plague, the father true to his promise bought a keg of the ship’s spirits, knocked off the head, placed the girl inside and refixed the head to the keg. ‘American ingenuity,’ Adair marveled. ‘And understandably comforting to the poor bereft mother.’ "
"Inwardly, she was reacting violently to the super-saturation of adrenal fluid his voice had generated."
" ‘I’m a husky American girl,’ she reasoned. ‘I can do it.’ "

A Nurse for Rebels’ Run 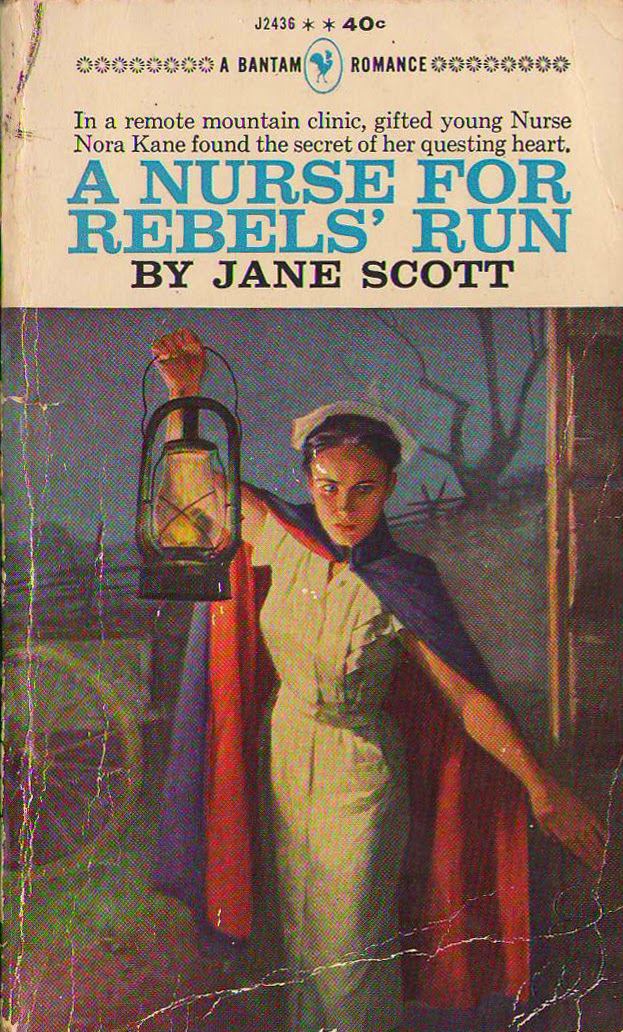 A Nurse on Horseback 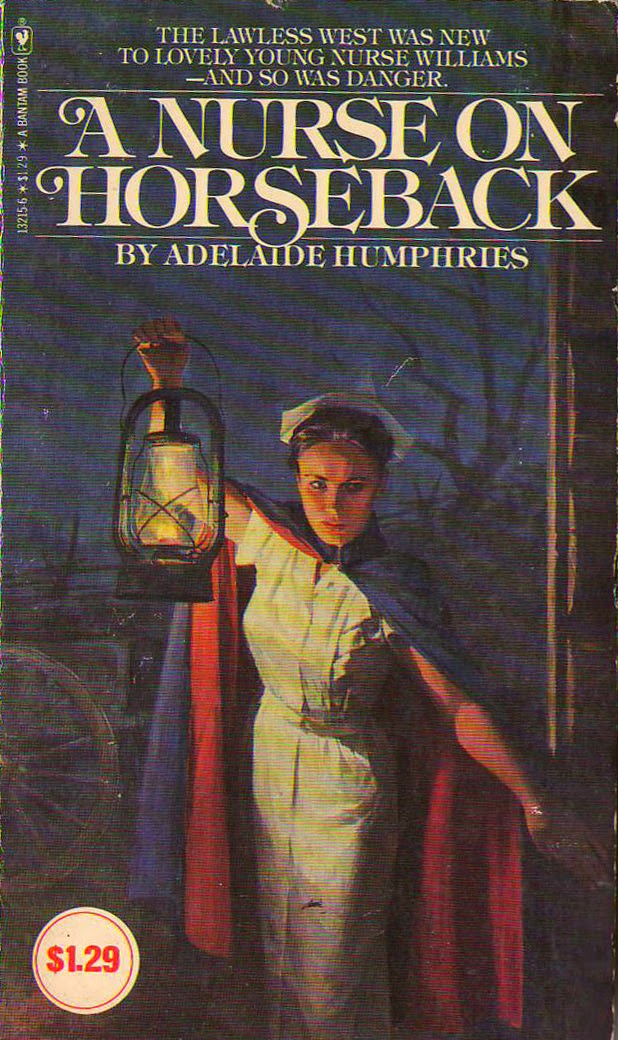 When Nora Williams completed her nurse’s training and went home to the lawless West, she was determined to stay in this remote country where a nurse was so desperately needed. But then one day, on a lonely mountain trail, as Nora was riding to a sick child, the silence was shattered by the bark of a gun. Suddenly Nora knew that the bullet was meant for her! Who was trying to keep this dedicated young nurse from her task of helping the poor and defenseless in this wild country?
GRADE: B
BEST QUOTES:
“Every young girl likes to pretty-up at the end of the day for the evening ahead.”
“I should think such a beautiful girl could demand for more. And having a professional career is not altogether what I had in mind, though probably that will lead to marriage, too—which must be what you most desire for her.”
REVIEW:
It’s true, as advertised on the back cover blurb above, that this book starts off with a fairly literal bang when someone takes a shot at nurse Nora Williams as she ride—horseback, of course—to see a patient not long after arriving in the west to live out her days on her Aunt Til’s ranch. She believes, though, that the shot was made by a hunter, and she’s more concerned about the fact that her horse threw her and then ran off, leaving her with several miles to walk before reaching her destination. And it’s really not much more than a device to place her into close contact with the cowboy who comes riding down the path, Dan Corby. Naturally, Nora draws a gun on him and accuses him of having fired the shot “at my mare—or at me!” which is not what she had just been thinking a few moments earlier. He offers her a look at his gun to show it hasn’t been fired, and when it’s clean, she asks him for a ride and swings up behind him onto his own horse, the floozy.

Anyway, all that and her nursing visit over, Dan takes her home and is promptly hired to be ranch foreman. The ranch is in financial trouble, of course, and the mortgage is owned by banker Burt McCulley, who is pressing Til to sell the ranch. But Til has a trick up her sleeve; a young man who invested all her life’s savings for her is coming to deliver the enormous profits he’s reaped in a week. The day Thomas Jeffries is due on the ranch, Til rides out to meet him, but comes back alone, and Thomas never shows up—until a week later, when he is found murdered in the desert. And it’s discovered that he’d lost all Til’s money to boot! Which means that Til won’t be able to pay off the mortgage, and is a suspect for murder!
To solve both these problems, Nora lies to the sheriff about Til’s whereabouts that day and then dates banker Bart, who proposes on the first date: “I might remind you that if you marry me, all your worries—your aunt’s worries—will be over,” he tells her, the suave lothario. To reassure her that he is not motivated to propose because of her aunt’s property, he points out that she will make a good mistress of his own huge ranch since “you come from good stock.” To her credit, Nora thinks, “You might have thought he was picking out the finest breed of cattle,” but she winds up accepting him anyway, and the fact that this will make her essentially a whore isn’t discussed.
Then Aunt Til fires Dan, for reasons she fails to explain. And starts coughing a lot, and staying in bed, and talking about dying. And confesses that it was she who shot at Nora, because she wanted Nora to go back to the East Coast and never find out that the ranch was heading into foreclosure. It’s an overly lame note that could have been avoided, and it doesn’t even make sense—how could Til possibly hide the fact that the ranch had been lost to the rest of her family, no matter where they are, when she has to find another place to live?
Things go from bad to worse for Nora and her beaux: Dan is arrested for the murder of Thomas Jeffries, because apparently he’d been riding the range that night as well, and Jeffries’ saddlebag is found in Dan’s bunk. And Bart’s unimpressive reputation is further sullied when Nora learns that Bart’s men are burning down the ranches of farmers who won’t sell out to Bart. Then the sheriff shows up at the ranch with Nora’s little gun—the one she’d threatened Dan with in the first chapter, remember?—which was discovered near where Thomas Jeffries’ body had been discovered, and has been found to be the murder weapon. The sheriff is about to arrest Nora when Til—hold onto your hats, friends—confesses to the murder. Before the sheriff can drag her off to jail, however, Til conveniently collapses and dies in Nora’s arms. To top off one perfunctory, obvious scene with another, the final chapter finds Nora nearly drowning in a river, to be rescued by Dan and discovered to have broken off her engagement to Bart.
The problem with this book is that it bitterly disappoints: Early on it manages to depict Dan and his interest in Nora in a completely believable and appealing way, only to totally squander your emotional investment with a whole host of absurd and obvious scenarios that dot the remaining three-fourths of the book. I truthfully mourned the book that could have been. So while I can easily recommend that you pick up this book, I have to also suggest that you strongly consider putting it down again after page 30.
Posted by Susannah at 11:04 AM No comments: