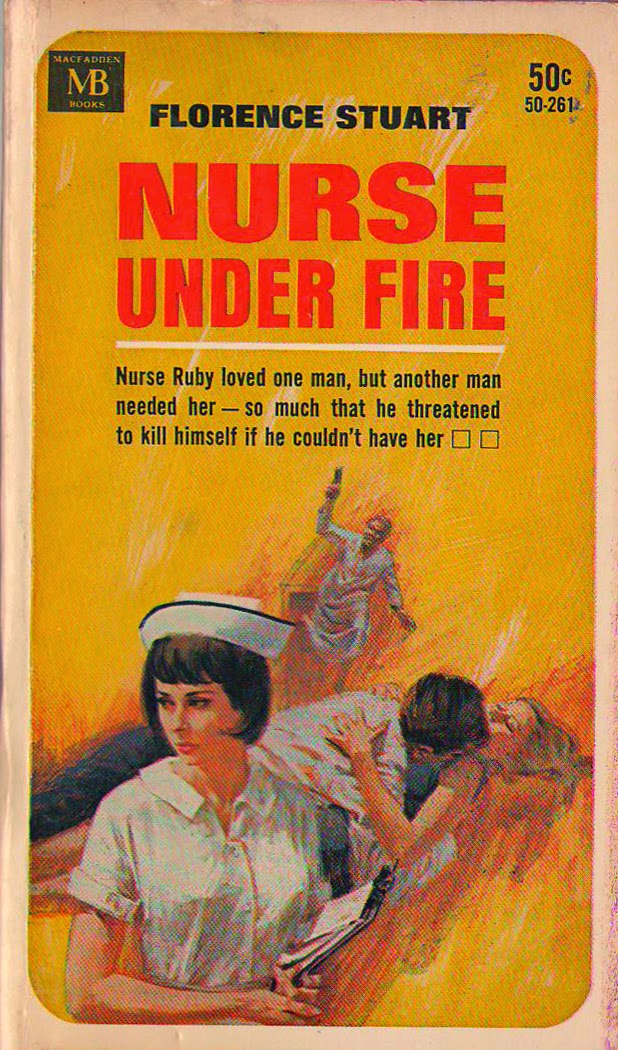 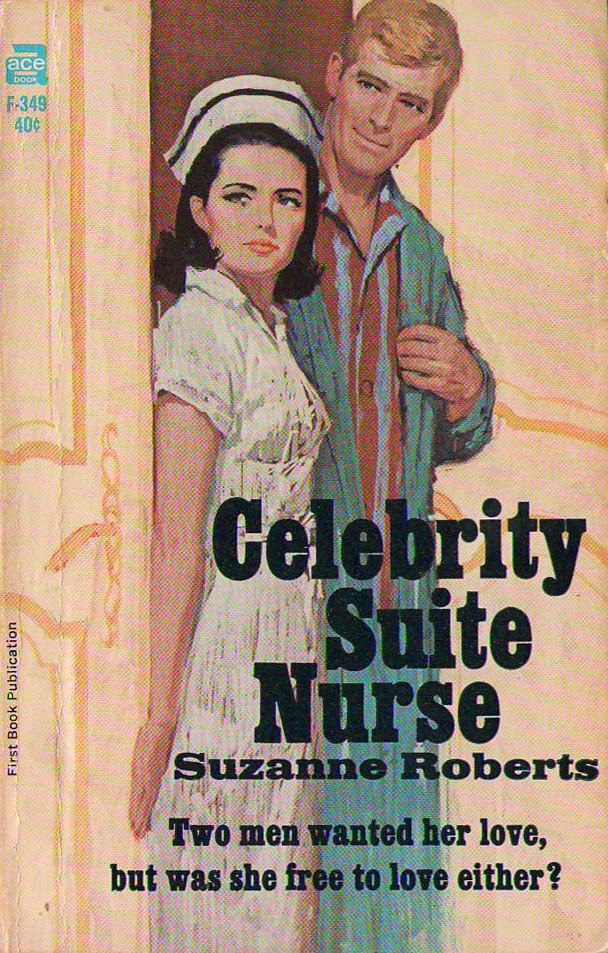 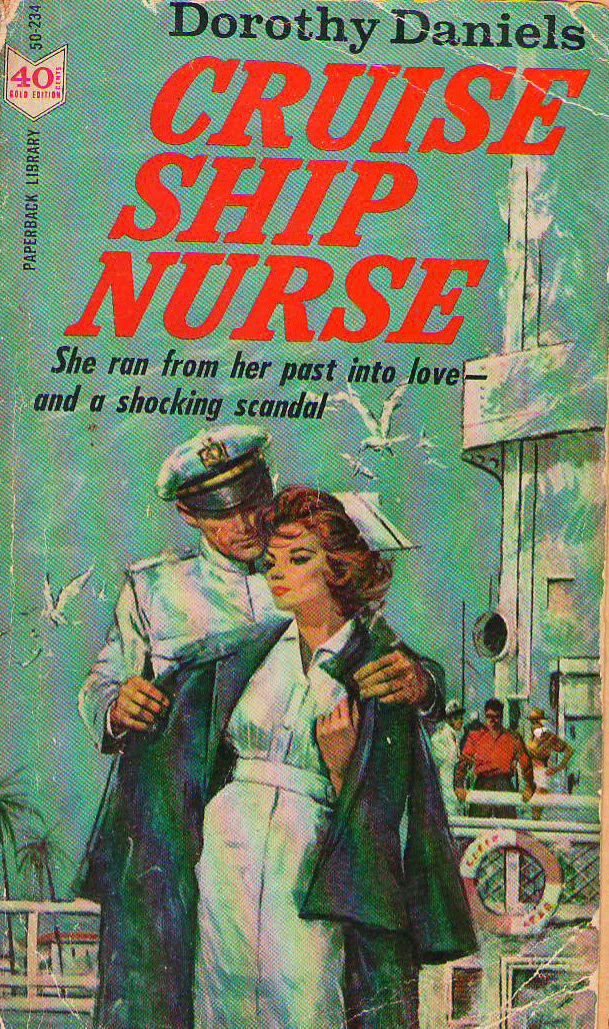 Karen Carlisle thought her frantic flight from the past was over when she boarded a luxurious ocean liner, to become the ship’s nurse. There, among strangers—the richest and most glamorous people in the world—she felt safe. Nobody asked why she was there. And she could pretend she was free like the others. But when an infant was stricken with a fatal disease which only Karen understood, her safety, her career, the love she had learned to cherish above all else, must be sacrificed. Though it might mean disgrace and the loss of her fiancé, Karen Carlisle prepared to reveal the scandalous truth.

BEST QUOTES:
“What a bedside manner. You’ll charm the women out of their minor illnesses.”

“I suppose everyone is entitled to a ship romance. It must even be included in the brochure of the cruise.”

“Now run along and attend to your gown and your makeup, all the things that will make everyone appreciate you so much.”

“There’s nothing better than a pizza in Japan.”

“They want a doctor, not a fashion plate.”

REVIEW:
Seldom do we meet a VNRN heroine as smart and as feisty as Karen Carlysle. In truth, she should really be a physician assistant or nurse practitioner, so focused is she on diagnosis and treatment (she had wanted to be a doctor, but financial considerations forced her to drop that dream). This interest surfaces right away when she is assisting society hack Dr. Radcliffe, who is “oozing his bedside best” with a rich, demanding woman with a thyroid tumor. The patient wants an immediate diagnosis, so Dr. Radcliffe pulls out a Vim-Silverman needle for an on-the-spot biopsy. Karen, who had been studying up on thyroid cancer, looks upon the doctor with horror and reminds him that a needle biopsy of a cancerous lesion can seed tumor cells, causing metastasis. He drags her into the corridor and, as she argues with him that the procedure is incorrect and dangerous, declares that he will have her license revoked for interfering with a doctor.

Fortunately, though, also present in the room was her fiancé, Dr. David Logan, who will naturally back her up with this important but outdated doctor. “I’m a lowly resident. I don’t know anything,” he tells her. “A nurse should know even less, but the most important thing she should know is to keep her mouth shut. Damn it, you’re not a doctor. You’re just an interfering nurse who shouldn’t even wear that uniform.” Thanks, Dave. Needless to say, when called to testify before the chief of staff that Dr. Radcliffe had been about to perform a contraindicated biopsy, Dr. Logan “promptly” denied it.

Karen, expecting to lose her license as quickly as she lost her fiancé, is on her way out of the hospital when she passes the room opposite the thyroid patient’s, where she finds an elderly man in respiratory distress. She cannot resist a patient in need, so despite her own problems, she helps him until he is better. It turns out that he had heard the entire exchange, and now wants to help Karen. It turns out that he is the owner of a cruise line, and with one phone call gets her a job on the Prince Thatcher, a luxury liner embarking on a three-month cruise through the Pacific tomorrow.

So off she sails … but her troubles are not exactly behind her, because the ship physician, Dr. Lloyd Dunlop, is more concerned with cocktail parties and bridge games than he is with medicine. You don’t have to be a brain surgeon to see what is coming next. One patient on board, a Filipino diplomat named Ramon Morrano, is returning to Manila with a fatal lung cancer to die, but it looks like he won’t make it. Karen “had made it a habit of reading all of these journals she could find.” This was how she had known so much about papillary carcinoma of the thyroid; “the hospital library had been at her disposal and she’d studied case histories thoroughly. It was like Karen to do that because her interest in medicine and nursing was such that all this hard work was of vast satisfaction to her if she understood a little more.” So now a little paper about advanced treatments of terminal cancers is teasing her memory. A few hours and a stack of Dr. Dunlop’s virgin medical journals later, Karen discusses a new anabolic medication with Mr. Morrano, who would like to try it—but a nurse can’t prescribe, only Dr. Dunlop can. Needless to say, he is not at all impressed with his uppity nurse. “I refuse to take any responsibility for administering a drug I know nothing about,” he shouts.

Fortunately, Karen has a new friend on board, Pete Addison. Pete refuses to tell Karen what he does for a living and seems to be trailing—and photographing—another passenger, Robert Nesbit, a shy recluse who turns out to be one of the richest men in the world. Karen is upset about this, but Pete tells her that he has given his word to keep this secret and so cannot tell her about it, much as he’d like to. Karen believes Pete to be honorable, and it also turns out that he’s powerful, because he has some of this drug flown by jet from New Jersey to Los Angeles, then on a military bomber to Hawaii. Pete also has a few words with Dr. Dunlop, and soon Mr. Morrano is well enough to take some liquids and even go out on deck to enjoy the views. And remember that Pete is a journalist for a very important and quite conservative news magazine, who had interviewed him once in Washington. “You must never let him become aware of the fact that you know who he really is and what he’s up to,” Morrano advises. “Let him tell you himself, for then he will feel more important and honest. Never bring a young man’s head down out of the clouds.”

And it’s not too long before Pete’s compunction to keep secret his mission fades, and he tells Karen that he is trying to do a profile about Mr. Nesbit, who has always refused any press in the past. But “he has no right” to privacy, Pete states, that the public has “a right to at least know what he looks like,” a curious assertion. And Mr. Nesbit’s six-month-old baby, Melissa, is looking a bit blue about the lips and not taking her food. Dr. Dunlop prescribes a change in formula, but our bold diagnostician Karen has cardiac ideas. When she finds, after a more careful examination than Dr. Dunlop’s, that Melissa is limp, pale, afebrile, and tachycardic, she insists that the baby has more than a minor stomach upset, but Dr. Dunlop furiously denies it. “See that you remember your place,” he snaps. “You are a nurse, not a doctor.”

Needless to say, however, the formula change makes no difference to Melissa, and now the Nesbits are calling for Karen, not Dr. Dunlop. “Frankly, I think you know more than he does and you apply your skill better,” he tells her. Karen is worried, of course, that she’s just adding to her troubles: “I guess I’m not a very good nurse. The first thing we’re taught is to obey the doctor.” But Pete has confidence in her: “If you saw Dunlop going off on a wrong diagnostic tangent, you’d step right in and do what you honestly knew to be right, even if it meant more trouble. You stick by your guns, my girl.” So she returns to the sick bay and promptly starts reading up on pediatrics. When she discusses the case with Dr. Dunlop the next day, he declares that the baby may have acute appendicitis, and Karen is “almost in awe of the man’s complete ignorance.” A blood count proves him wrong, but Dr. Dunlop is afraid to do and EKG for fear of upsetting the Nesbits. Feeling powerless to contradict the doctor, Karen pours out her worry to Pete, who has a talk with Mr. Nesbit. Mr. Nesbit listens to Karen’s reasoning and insists that she do the EKG, but now Karen is in the precarious position of having introduced the journalist to her patients.

The EKG shows ventricular hypertrophy, and Karen diagnoses coarctation of the aorta. The baby will need immediate surgery, but again, a medication, plus oxygen and antibiotics, will help relieve her symptoms until she can have the surgery. She just has to go up against Dr. Dunlop again. “If she was wrong, she was finished as a nurse. But she was certain the medical books backed her up—if she had read them properly—and she knew she had.” In her discussion with him, she is calm, confident, and insistent that he do the right thing, advising that he communicate with a cardiologist by radio—which is promptly done, and the MDs ashore confirm Karen’s diagnosis. In a meeting with the captain, however, Dunlop brings up Karen’s insurrection with Dr. Radcliffe, suggesting that she “has some type of complex and is possibly psychotic. If that’s all, Captain, I’ll return to my party.” But Pete steps up and asks the doctor if he even knows what the proper treatment for the baby is. He does not, unsurprisingly, but Karen sure does! Her treatments are confirmed by the cardiologist ashore, so now all we have to do is get Melissa to a hospital that specializes in pediatric cardiology in the next 36 hours. But Pete—first confessing his occupation to Mr. Nesbit, destroying his film, and tearing up his story—calls on his amazing contacts with the military and arranges a helicopter from a nearby aircraft carrier to swing by and pick up Melissa, Mrs. Nesbit, and Karen, take them to the ship and then to Honolulu by military jet, then by private jet to Los Angeles—the very hospital Karen was to be drawn and quartered at. There, the baby is saved, and Karen is cleared of all wrongdoing in the thyroid case, after sworn affidavits from the cruise ship owner, the supply room manager, and the patient herself showed that Dr. Radcliffe had called for a Vim-Silverman needle. Phew! All that’s left is for Karen to receive Pete’s proposal of marriage over the telephone from Singapore, and all is well.

I’m not really certain that Karen is going to be happy professionally as a nurse, now that her name is cleared—she most positively would not be content as a housewife. But I appreciated both her confidence as a healthcare practitioner, her diligence in doing her homework, and her assertiveness (and her doubts) in challenging the doctor. She is truly an enjoyable heroine, one able to toss of a biting remark when necessary. The writing is slightly above par, and the characters were, for the most part, well-drawn. And when the first class of physician assistants matriculates at Duke in a few years (the first four PAs graduated in 1967), we can only hope that Karen Carlyle will apply.

Posted by Susannah at 6:29 PM No comments: