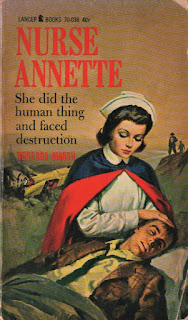 An overturned convertible—an overindulged scion of the prominent Hauser family lying injured. Nurse Annette saved his life and earned first the gratitude and then the wrath of his powerful father. Annette found herself involved in a bitter conflict in which lives as well as principles were at stake.

“My, the poor sort of men we’re breeding these days. True, several of his burns must have  been painful, and his ankle must have pained him some. But the burns weren’t major, and he actually had no broken bones. So help me, ma’am, those screams and the final swoon were definitely unjustified and unmanly.”

“You know how it is. Boys like girls, and single girls dream of being married.”

“You have to be nasty mean and tough to cope with Emergency.”

REVIEW
William Neubauer has written three other nurse novels reviewed in this blog, Nurse of Ward B, Nurse Greer, and Police Nurse.  Nurse Annette is definitely in keeping with these books: the political intrigue of PN, the two-nurses-vying-for-the-top-job of NWB, the interfering newspaper editor of NG, and the confusing plotting of all three. Here Nurse Annette King, the bestest nurse you could ever hope to meet, is in line to be head of the visiting nurses division (sound familiar?) of Southworth Memorial Hospital located in, I think, Los Angeles, when she happens upon a car crash in which wealthy ne’er-do-well Dane Hauser is injured. She saves his life in superhero fashion: “What you did, King, was charge along in the finest tradition of the nursing service. You actually hoisted up the rear end of that Jaguar and shoved Dane Hauser clear with your foot. Your skirt caught fire. Were you dismayed? Nope. You wallowed it out in one of the irrigation puddles, and then you went to work on your patient.” And after she’d stabilized him, she flew him to Southworth Memorial in her invisible jet.

Her heroic deed, however, brings her nothing but trouble. The question of whether Dane had been entirely sober at the time of the crash is discussed in the papers, and as the nurse on the spot, her testimony is sought by all. Dr. Gramm, the head of the hospital, accepts more than $100,000 worth of iron lungs to keep mum on the subject from Dane’s dear old dad, Ludwig Hauser, who has Big Plans for Dane that the young man clearly isn’t too interested in. Annette, having literally saved his life once already, now sets out to save it metaphorically by freeing him from Dad’s clutches and finding him a spine as well as two feet to stand on. But because she refuses to kneel at Ludwig’s feet, she is passed over for promotion and the job goes to Ruth Larrabee, a very capable nurse but a terrible manager. Annette is forced out of her job by Ruth, and the other nurses revolt. Annette drops a dime to the newspaper editor who started the whole crisis with his editorial speculations and tells him she’s out of a job, but a top surgeon who—like every other medical professional in town—has been an admirer of Annette’s, offers her a job in his office, which she accepts.

Dane, finding himself increasingly sway to Annette’s guidance, soon figures out which branch of Daddy’s huge company suits him best. He lets Dad know that he’s not going to be the ambassador Dad had hoped for but instead a contractor—and now he wants to marry Annette. But out of the blue Dr. Lyon tells Annette that he loves her, and eventually she comes around to the idea of him as a husband—because no one can ever just date for a while.

One of the  best things about this book is our heroine, Annette, and you know damn well that it’s altogether too rare an occasion when we can say that. Annette is tough, smart, hard-working, kind, shrewd, and a great nurse. It’s equally rare that her main beau admires all these qualities and has no interest in transforming her into a meek housewife with a high likelihood of developing chemical dependence: “What he liked best about her in that moment was the unafraid gleam in her big blue eyes. Although it was clear she realized it would be a tough job, it was also clear that she was tempted to try it. ‘Honey,’ he advised, ‘always get the whole ball of wax whenever you can get it. If it’s work you like and think you can do, try it.’” A VNRN fiancé who is encouraging his girlfriend to work instead of insisting that she quit her job? I’m swooning!

Another great aspect of the book is its sense of humor, which is wry, starts out strong, and never quits. There on the opening page, Annette’s father is razzing her mother about how slow breakfast is in arriving at the table. “Say more,” Mom responds. “I haven’t had a brawl in years.” One problem with the book are its supporting characters, who just don’t have much life to them; Dane, who is supposed to have this major breakthrough, is just a cardboard figure, as is Annette’s love interest, Dr. Lyon. Another is that, à la Police Nurse, the political intrigue is initially hard to follow—but helpfully, about halfway through, Dane Hauser’s attorney sums it up for the lad, so the audience has the chance to catch up, too. But these slights are not particularly onerous, and with writing this good, it is no trouble at all to overlook them.

Posted by Susannah at 9:24 AM No comments: 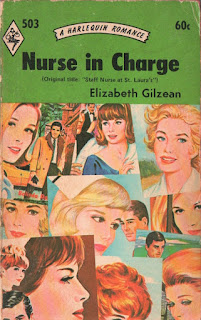 Posted by Susannah at 6:27 PM No comments: