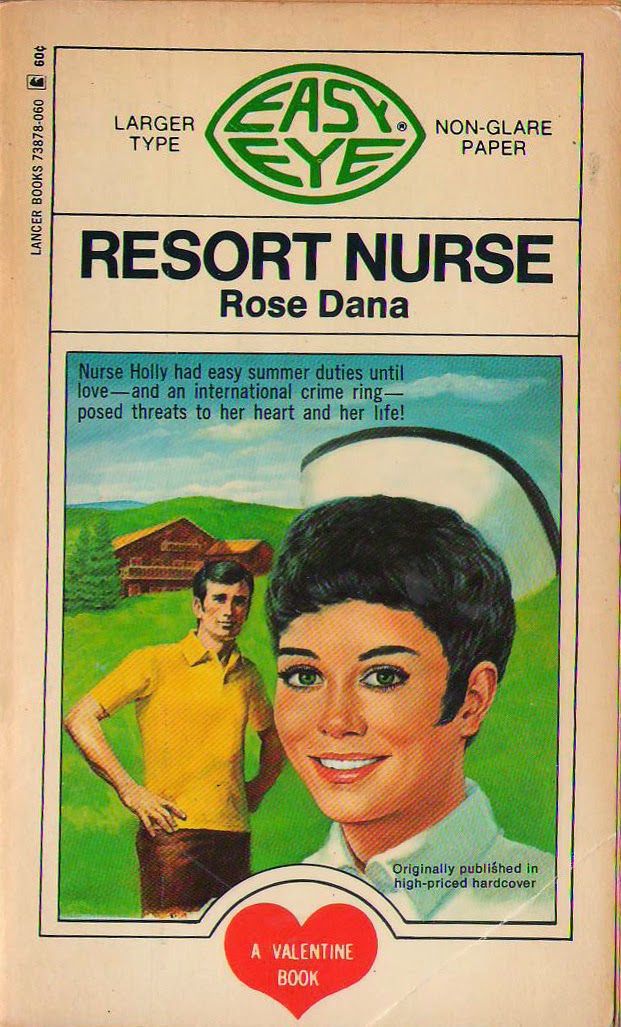 Cover illustration by Mort Engle
“Are you after a fat paycheck, Nurse?” The contempt in Dr. Adam Victor’s voice stung Shelley—but it was true she was leaving the hospital to nurse a private patient, and Miriam Bleeker was very rich indeed. The handsome young doctor looked on Shelley as a deserter—and what made it worse was that Dr. Victor had declared war on the whole Bleeker family … and anyone who was with them was his enemy!
GRADE: C+
BEST QUOTES:
“I’m direct. That’s my big problem. I say what I think. Do you know how many people go around never really saying what they think or doing what they want, or being their real selves? IT’s sickening. It really is.”
REVIEW:
Dr. Adam Victor is a tall, hungry-looking young man who yells at all the nurses and “seemed to hate all women in general, nurses in particular and Shelley especially.” Naturally, Nurse Shelley Stevens is drawn to this doctor, with whom she does nothing but fight.  “She didn’t know why she allowed him to upset her so much, but he invariably did.” Well, we know why, don’t we, readers! Shelley has a boyfriend, artist Paul deWinters, but though she loves hanging out in his apartment, she’s not as emphatically gung-ho about him. He doesn’t have a lot of ambition, “content to drift along in his easy-going way,” and besides, “there was always something just not quite right. Something was not complete.” This setup is a fairly standard VNRN ploy, telegraphing from the first page what’s going to happen on the last. It bores me.
Shelley lives and works in a mill town, and the mill in question is owned by the Bleeker family. The operating conditions at the mills are poor, and many workers end up in the hospital after accidents that could have been avoided. This is why Dr. Victor hates the Bleekers so much. But Shelley is asked as a special favor by Dr. Harris, an old friend who encouraged her to go to nursing school, to take a job specialing Miriam Bleeker, who is recovering from a stroke. So though she knows it is going to get her into hot water at work—and sure enough, it does—she takes the job. While she’s living in the Bleeker mansion, she begins to run into numerous mysteries: Why won’t the unions advocate for the workers but are content to let the lax conditions go unchallenged? Why is Dr. Harris, who is the medical director for the mills, also disinterested in pushing for better safety for the workers? What is Dr. Harris’ relationship with Mrs. Bleeker? Why has Mr. Bleeker abandoned the family?
About halfway through the book, Dr. Vincent and Shelley meet up at the funeral of a much-beloved patient and end up at dinner together—and kissing afterward. “I don’t understand. I thought we hated each other,” says Shelley the simpleton. After kissing her silly, Dr. Victor insists that Shelley quit working for the Bleekers, or “we’ll forget what just happened.” She’s shocked, but has enough spine to give him a piece of her mind and go back to the Bleekers.
Eventually, the crisis you knew was going to happen actually does: There’s a big explosion at the mill, and many people are seriously injured or killed. The shock of the accident also sends Miriam into a second and fatal heart attack. This saves everyone from the responsibility of agency: With Miriam out of the picture, her son Blake finally has the spine to throw his cheating wife and the corrupt union boss out on their ears, and start running a responsible business, vowing to rebuild the mill according to the best safety standards out there! Mr. Bleeker is returned to the mansion from the nursing home where he’d been hiding out, and Shelley is obliged to return to her job at the hospital. So now all it takes is for Dr. Victor to come striding over to her, grip her painfully by the shoulders, and command, “You’re going to marry me, Shelley. Just as soon as it can be arranged.” And that’s that, all but the nauseating final sentence.
The writing isn’t bad, but the plot is trite, and Nurse Shelley’s capitulation is more than a little disappointing, especially after the way she has stood up for herself all through the book. And we’re left with the question: What did Shelley decide? Seems to me the decision was made for her. If you figure it out, let me in on it.
Posted by Susannah at 7:13 PM No comments: 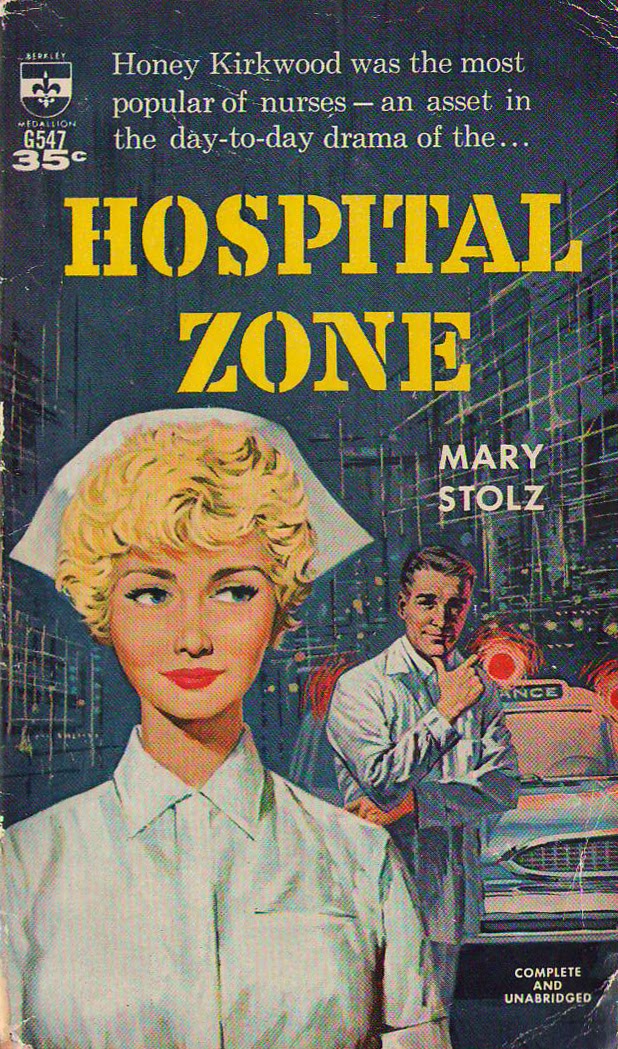 Nurse Honey Kirkwood’s cheerful outlook on life made the hospital “routine” a pleasant, humane way to help her fellowmen. When off duty, Honey’s attractive face and ready smile made her irresistible—that is, to all but serious-minded Dr. Vincent Dragone. For Dr. Dragone, nurses did not seem to exist, except as assistants in the O.R. (Operating Room). Honey tried in every way she knew to arouse the handsome young intern’s interest, but his attitude toward her was strictly professional. The fact that three other young men were in love with her did not make Dr. Dragone’s indifference any easier to take. What do I want? Honey repeatedly asked herself. She found what she was looking for in her work … and in the man who wouldn’t take no for an answer.
GRADE: A-
BEST QUOTES:
“Interns’ purses were just about as flat as their manners, and probably the poor things couldn’t help either.”
“There was a certain sort of clan esprit about the hospital, even if you did need a stethoscope and a microscope and a sabbatical leave to find it.”
“That smile could cause riots.”
“He was going to die, and was taking too long because the hospital gave him such excellent care.”
REVIEW:
Mary Stolz was a prolific writer for young adults, and, indeed, Hospital Zone was originally marketed to the young adult market. Here, however, it has been repurposed for the VNRN reader, and if the age of the heroine determines the literary niche, then a good number of VNRNs could likewise be designated young adult fiction. Honey Kirkwood, whose given name will rank alongside Candy and Poppy as the more unfortunate monikers I’ve met in this genre, is a 19-year-old student nurse with at least three beaux and a good idea of how to manage them: “Every time he comes into your mind, you just have to shove him out again, and after a while he quits coming around.”
Most of the book follows Honey throughout her daily life, caring for patients that are kind or mean, getting well or dying, sympathetic or irritating. She lives in a dorm full of lively fellow students, and the dialogue is snappy and smart when she’s with her peeps. As is common with the young adult genre, Honey is grappling with existential problems common to the young: who she is as a person, what she wants from life and her relationships with men. She waxes philosophical about the usual tripe that VNRNs of this period hand out, that “for girls the entire point of life was men.” But she actually sits down to think that over, unlike most heroines we read about who just gulp it down without swallowing. Early on, she does decide that “when you’d found him, and you knew, all the rest would just fall in line because you’d be a whole person and a whole person takes life whole, not in pickings as if it were a tray of canapés.” The nice thing about this is that along her way, Honey meets an elderly woman who tells her that even one’s “true love” fades with time, that there are other loves to be had. Honey immediately discards this as impossible, but the wise patient is proved correct in the end, when Honey fails to land the big fish, another groundbreaking development in VNRNs.
But we need not feel too sorry for Honey, as she is seldom without male company: She dates her three boyfriends, one more than the others, and that one, Joey, proposes about midway through the book. Honey wisely declines to answer, saying, “I’m too young”—and I was mighty pleased that for once a heroine wasn’t finding her purpose in life from a little golden circle. But through it all she’s mooning for the aloof Dr. Dragone, a handsome but inaccessible doctor with whom she has occasional exchanges. At book’s close he’s going to a residency in New York and Honey is left with the realization that she does love him and she can’t have him, but that the pain will pass and she will go on and be a better person for having known, and valued, him. It makes for a far weightier ending than the usual nurse novel, one that’s actually worth 173 pages. Even if it falls a smidge outside the strict definition of a nurse romance novel, I am glad not to have missed this impressive little book.
Posted by Susannah at 8:30 PM No comments: