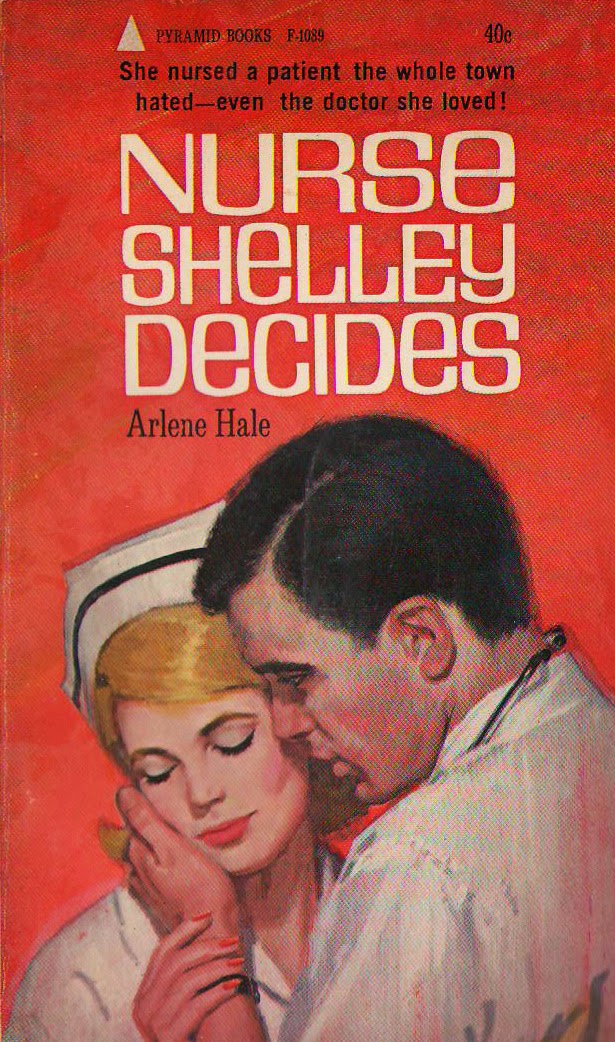 Cover illustration by Mort Engle
“Are you after a fat paycheck, Nurse?” The contempt in Dr. Adam Victor’s voice stung Shelley—but it was true she was leaving the hospital to nurse a private patient, and Miriam Bleeker was very rich indeed. The handsome young doctor looked on Shelley as a deserter—and what made it worse was that Dr. Victor had declared war on the whole Bleeker family … and anyone who was with them was his enemy!
GRADE: C+
BEST QUOTES:
“I’m direct. That’s my big problem. I say what I think. Do you know how many people go around never really saying what they think or doing what they want, or being their real selves? IT’s sickening. It really is.”
REVIEW:
Dr. Adam Victor is a tall, hungry-looking young man who yells at all the nurses and “seemed to hate all women in general, nurses in particular and Shelley especially.” Naturally, Nurse Shelley Stevens is drawn to this doctor, with whom she does nothing but fight.  “She didn’t know why she allowed him to upset her so much, but he invariably did.” Well, we know why, don’t we, readers! Shelley has a boyfriend, artist Paul deWinters, but though she loves hanging out in his apartment, she’s not as emphatically gung-ho about him. He doesn’t have a lot of ambition, “content to drift along in his easy-going way,” and besides, “there was always something just not quite right. Something was not complete.” This setup is a fairly standard VNRN ploy, telegraphing from the first page what’s going to happen on the last. It bores me.
Shelley lives and works in a mill town, and the mill in question is owned by the Bleeker family. The operating conditions at the mills are poor, and many workers end up in the hospital after accidents that could have been avoided. This is why Dr. Victor hates the Bleekers so much. But Shelley is asked as a special favor by Dr. Harris, an old friend who encouraged her to go to nursing school, to take a job specialing Miriam Bleeker, who is recovering from a stroke. So though she knows it is going to get her into hot water at work—and sure enough, it does—she takes the job. While she’s living in the Bleeker mansion, she begins to run into numerous mysteries: Why won’t the unions advocate for the workers but are content to let the lax conditions go unchallenged? Why is Dr. Harris, who is the medical director for the mills, also disinterested in pushing for better safety for the workers? What is Dr. Harris’ relationship with Mrs. Bleeker? Why has Mr. Bleeker abandoned the family?
About halfway through the book, Dr. Vincent and Shelley meet up at the funeral of a much-beloved patient and end up at dinner together—and kissing afterward. “I don’t understand. I thought we hated each other,” says Shelley the simpleton. After kissing her silly, Dr. Victor insists that Shelley quit working for the Bleekers, or “we’ll forget what just happened.” She’s shocked, but has enough spine to give him a piece of her mind and go back to the Bleekers.
Eventually, the crisis you knew was going to happen actually does: There’s a big explosion at the mill, and many people are seriously injured or killed. The shock of the accident also sends Miriam into a second and fatal heart attack. This saves everyone from the responsibility of agency: With Miriam out of the picture, her son Blake finally has the spine to throw his cheating wife and the corrupt union boss out on their ears, and start running a responsible business, vowing to rebuild the mill according to the best safety standards out there! Mr. Bleeker is returned to the mansion from the nursing home where he’d been hiding out, and Shelley is obliged to return to her job at the hospital. So now all it takes is for Dr. Victor to come striding over to her, grip her painfully by the shoulders, and command, “You’re going to marry me, Shelley. Just as soon as it can be arranged.” And that’s that, all but the nauseating final sentence.
The writing isn’t bad, but the plot is trite, and Nurse Shelley’s capitulation is more than a little disappointing, especially after the way she has stood up for herself all through the book. And we’re left with the question: What did Shelley decide? Seems to me the decision was made for her. If you figure it out, let me in on it.
Posted by Susannah at 7:13 PM