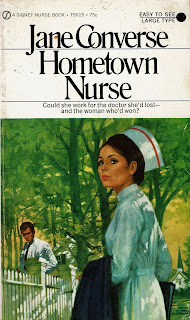 Peggy Mitchell lost the game—and Dr Mark Woodward—to Veronica Nolin. She was ready to leave River Bend forever. Then it happened. The auto accident that paralyzed Veronica’s sister and thrust Peggy into the role of private-duty nurse to a doctor she loved, a woman she hated, and a helpless patient whose dependence could wreck her life.

BEST QUOTES:
“Like everyone else one meets on planes, trains, and buses, she was an unlicensed psychologist.”

“Waiting for him to ask for a date was like waiting for an invitation to be the first lady astronaut.”

“Seeing Mark Woodward daily at the hospital provided her with breathless moments at intervals close enough together to threaten her respiratory system.”

REVIEW:
Nothing drives a young woman to visit her childhood home like her widower father starting to date again. Nurse Peggy Mitchell, a year out of school and having persuaded her folks to move to Chicago with her, can’t stand the lovely, unobjectionable widow her father is dating, so she decides to visit River Bend, Texas, though there are only two people she wants to see: girlhood friend Janice Nolan and David Bancroft, who had once professed to love her but whom she had “never dated, because David’s father was abysmally poor, and a car or spending money were undreamed luxuries for a boy who wore patched corduroys and, for the four years he attended River Bend High, the same gray thrift-shop sweater.” Imagine her surprise when she arrives in town to discover that David has become a millionaire real estate tycoon and is engaged to marry Janice!

Not so great a loss for Peggy, though, because David is immediately painted as a bit of a dick. Too concerned about material things, he’s “never read a poem in his life!” exclaims the beautiful, flighty artist Janice. When over lunch Janice quotes a line of poetry she’s written, the patronizing jerk pats her hand and tells her, “You keep having pretty little ideas and looking beautiful, baby.” The story abruptly turns into a mystery, namely why the two women seated at the table didn’t pummel him senseless and leave. Worse than this, even, David refers to Peggy as “Nursie.”

Her curiosity satisfied, Peggy is packing to go back to the windy city when she meets Dr Mark Woodward, chief of staff at the local hospital. She instantly falls in love, and gets a job at his hospital and an apartment in his building. The two become friends—but nothing more than that, and by Chapter 4 (the above action happens in about as many sentences in the book) she’s again decided to leave town—after the big costume ball, her one chance to dance with Mark. During the party, however, it  becomes plain that David is still in love with Peggy, the secret pouring out of him as he pours the drinks in. Finally stomping off in a huff with Janice in tow, to take her for a spin and likely break up with her, the group—including the doctor and the nurse—watches him weave across the lawn without more than the meekest protests, and then sprints to the wrecked car to extricate the near-dead Janice.

Now irrevocably confined to an iron lung for total paralysis, Janice begs Peggy to become her nurse, and of course Peggy cannot refuse, though guilt for her role in allowing the accident to occur is not one of her motivations. She gives Janice a reason to live when she suggests that the patient write stories for children, but Mark persuades everyone not to mention this plan to Janice’s older sister Veronica, a beautiful but domineering woman who has ruled Janice’s life with an iron ¾-length glove and is the driving force behind the upcoming nuptials, because Veronica is somehow going to see this as an indication that Janice will never walk again. But this secret is revealed in short order as well, and Veronica is livid: “Don’t let anybody push a career at you, sweetie,” she snaps, and then she accuses Peggy of trying to steal David while Janice is indisposed. Janice agrees to stop writing stories and go back to planning her wedding, which David is guilt-ridden enough to go through with.

Mark pulls Peggy off the case, saying it was unwise to involve a friend as  a caregiver—again with too little, too late—and Peggy loses it, telling him that he has failed to protect Janice from her “ambitious tyrant” of a sitster, that he is standing by and letting “a sick, vain, money-obsessed woman destroy Janice’s mind!” The charge, given his history of passivity, is entirely valid. She then insists that if he had Janice’s best interests at heart he would keep Veronica away from the hospital and get a psychiatrist involved in Janice’s care, proving that she's better at Mark’s job than he is. The next day, Mark shows up at Peggy’s house, not to tell her he’s barred Veronica or hired a psychiatrist, but to beg Peggy to stay on as Janice’s nurse. He takes Peggy in his arms and tells her he loves her, so his continued failures with Janice are overlooked.

But we still have 33 more pages to go, so one night Veronica shows up at the hospital with a quack who claims to be able to cure Janice. The pair bundle Janice into a portable respirator, which has previously been proven to be inadequate for Janice’s ventilation needs, and truck her out to the quack’s spa in the desert. Needless to say, Janice quickly decompensates—but Peggy and Mark have figured out Veronica’s plan and arrive on scene to save the day, and Janice.

Veronica reacts to this crisis by completely parting ways with reality and is hospitalized herself, in the psychiatric wing. When she’s finally allowed to visit, she swoops in with a bridal veil and more wedding plans. Janice finally demonstrates that she has a spine, even if it doesn’t work, and tells Veronica that she does not love David, is not going to marry him, is never going to get better, and is going to be a writer. As the book ends, Peggy and Mark are planning a honeymoon to Niagara Falls and debating whether Peggy will keep her own career once they are wed. We can only hope Peggy proves to be as strong as Janice and wins that argument.

Jane Converse’s writing is usually a pleasure, and she doesn’t fail us here. The plot, however, gets a little muddy at the end, after Mark and Peggy are united and Veronica’s sanity begins to fray, one twist seeming premature in the book’s pacing and the other gratuitous, though Converse always does an exquisite screaming harpie. I was pleased that she found no miracle cure for Janice, which would have been too easy. If it’s not Converse’s best book, you could certainly do a lot worse.

Posted by Susannah at 1:46 PM No comments: