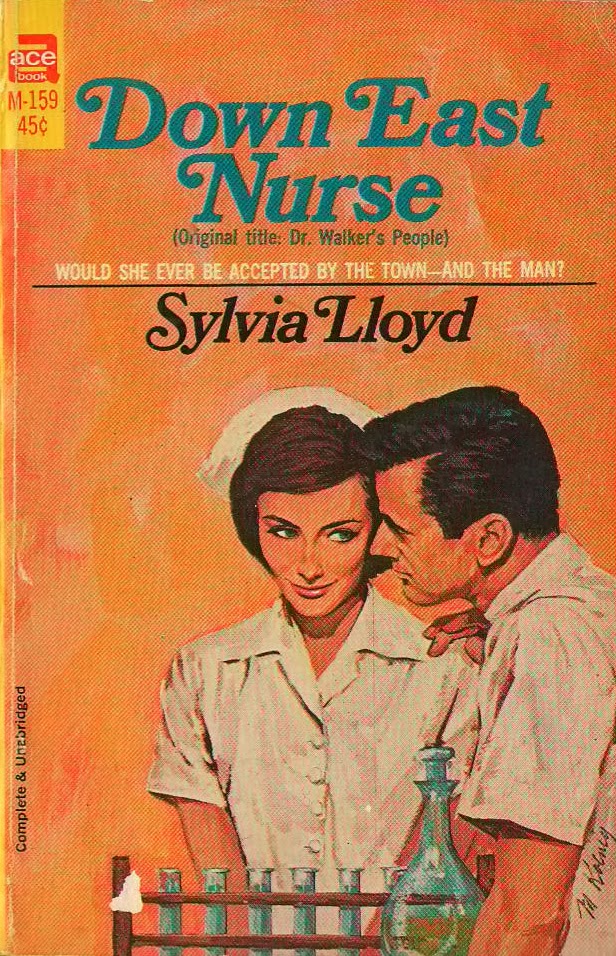 By Sylvia Lloyd
(pseud. , ©1965
Cover illustration by Martin Koenig
Also published as Dr. Walker’s People
Lovely, city-bred Claudia Snowden came to Maine to nurse her aging aunt—isolated in a remote New England village. Expecting to find an old-fashioned doctor using outmoded methods, Claudia found herself working instead with young, handsome Dr. Adams—who was as dedicated as the top-notch physicians she had worked with in the city… so dedicated that Claudia apparently could not tear his attention away from his work to herself. Should she abandon all hope of ever reaching this aloof doctor and say yes to the man who really needed her?
GRADE: B+
REVIEW:
When we first meet Claudia Snowden, she’s standing in her rich great-aunt’s over-decorated living room in Reachwood, Maine, evaluating the contents for its monetary value (she doesn’t find it) and wondering, “Where was the Snowden money?” She’s been dispatched to this godforsaken backwoods to care for old Elizabeth Snowden, an aging spinster with pneumonia, by her widowed mother in the hope of securing a prominent position in the old bag’s will. But Claudia is not the best option for a special nurse. Upon graduating, she had decided that “she wanted no more of bedside nursing” and had gone to work for an upscale specialist where patients pass quickly through, and “there was no feeling of involvement of responsibility.” She is full of scorn for the country doctor who has not admitted Elizabeth to the hospital, particularly because “when she met a man for the first time, she took for granted that instantaneous spark of interest and admiration in his eyes”—and the look the good Dr. Adam Walker bestows upon Claudia is rather one of scorn. Indeed, he dresses her down for criticizing his treatment plan, telling her that “Miss Libby” has refused hospitalization.
So Claudia is stuck in Maine, caring for Aunt Elizabeth. The only friend she has in an unctuous unsuccessful self-proclaimed artist, Chase Carpenter, though “the challenge of capturing Dr. Walker’s interest still remained.” Chase is entertaining, but Claudia has her doubts about him: He leaves his two boys, ages 7 and 8, at home alone; he refuses to pay Dr. Walker’s bill when one of his sons was ill; he shows no compassion for the poor. But when he finally kisses her, she is “astonished” to find that she enjoyed it. “Had she fallen in love at last?” Uh, no, dear. That’s just your glands talking.
She’s certainly not impressed with the townsfolk, who, though they regularly drop by with a bucket of milk or a cold ham for Miss Libby, aren’t warm and embracing. Indeed, Claudia finds them taciturn and coldly aloof, narrow-minded and insular. So when Aunt Elizabeth is clearly on the mend, Claudia is about to blow town when Chase falls out of the loft where he paints and shatters his leg, requiring surgery. He refuses to go to the hospital, however, unless Claudia stays with him morning and night. To get him to go, she agrees, thereby cementing his idea that she is in love with him, loudly proclaiming to every patient and healthcare professional that Claudia is “his girl,” much to her chagrin. Oddly, however, she doesn’t seem able to correct him on that score. But at the short-staffed hospital she helps out when she’s not rubbing Chase’s back, and manages to make herself useful, even coming to feel attached to a few of the patients.
Then comes the unfolding of a commonplace plot: Adam is cold to Claudia because he thinks she’s engaged to Chase, and she can’t bring herself to tell him—or Chase—that she’s not. It’s one of the more idiotic turns, because it seems utterly ludicrous that she can’t just open her mouth and start talking. But the book is largely redeemed by the way it presents her gradual unbending into a less grasping and materialistic individual into a caring, conscientious professional and human being. I also appreciated that Adam is always depicted as an admirable person; his initial disdain for Claudia is well-deserved and we know it, so we are spared another VNRN convention that I cannot stand, the complete ass presented as a dreamboat. The ending hits a small rough patch, though, with a dark secret from Adam’s past revealed but never really resolved. If the writing gives us nothing for the Best Quotes category, it goes down easy, and overall this is a pleasant enough book.
Posted by Susannah at 8:27 PM No comments: 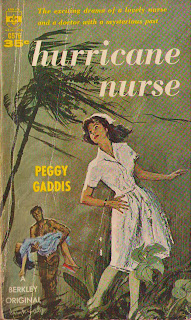 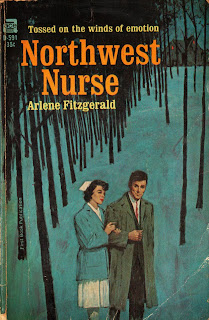 I don’t think anyone is more surprised than I am to find that I have actually made it to the fourth annual Vintage Nurse Romance Novel Awards. I’m not sure what it says about me that 220 nurse novel reviews later, I’m still putting along; I just hope it can in some way be construed a good thing.

Rules of the game: Winners are chosen from the VNRNs I have read this year (42 books by 35 different authors). The Best Authors category includes all the VNRNs reviewed for this blog, but only authors with more than one review are included; the One-Hit Wonders category is reserved for the best books by authors with only one review. 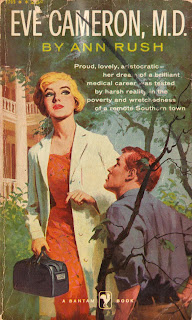 
BEST QUOTES
1.       “Would you like to go down by the river? There are benches, and I promise to behave outrageously.” Jennifer Jones, R.N., by Norman Daniels
2.       “She wished frantically that she were back in some nice safe operating theatre where the worst thing that ever happened at tables was that people died on them.” Nurse Tennant, by Elizabeth Hoy
3.       “Oh, Anne, not you—not you, of all people, wearing trousers!” Leap in the Dark, by Rona Randall
4.       “The marvels of artificial limbs, Lisa, can never be overestimated.” Luxury Nurse, by Peggy Gaddis﻿﻿﻿﻿
﻿﻿﻿5.       “ ‘She pushed me—’ He pointed an accusing finger at Rosemary. I was wholly on Rosemary’s side. We girls must stick together, I thought, and besides, she really did look angelic in that little pink dress.” Town Nurse—Country Nurse, by Marjorie Lewty
6.       “She jerked open the car door and saw the blood gushing from his chest. Instantly she stepped out of her half-slip and started tearing it in strips. I’m glad I wore a cotton one, she thought.” A Nurse Abroad, by Marion Marsh Brown
7.       “ ‘People don’t grow up until they’ve had some banging around,’ he observed.
‘Well, bang me around then,’ she replied. ‘I might like it.’ ” Five O’Clock Surgeon, by Dorothy Pierce Walker﻿﻿

8.       “It’s bad manners to turn down a proposal before the fellow makes it. Gives a sort of impression of overconfidence.” Candy Frost, Emergency Nurse, by Ethel Hamill (pseudonym of Jean Francis Webb III)
9.       “He’s not a complete Philistine, you know. I told him that I liked French painting, so when I went to see him at St. Agnes’s he talked about impressionism and the romantic movement all through two hernia operations and one gastrectomy.” The Doctors, by Clara Dormandy
10.    “Even at the risk of destroying some beautiful image you might have of us Norberts, I must confess that we still have an ample supply of vermouth.” Island Doctor, by Isabel Cabot (pseudonym of Isabel Capeto) 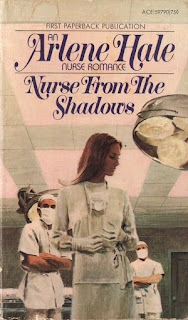 ONE-HIT WONDERS: Best VNRNs by authors with only one review