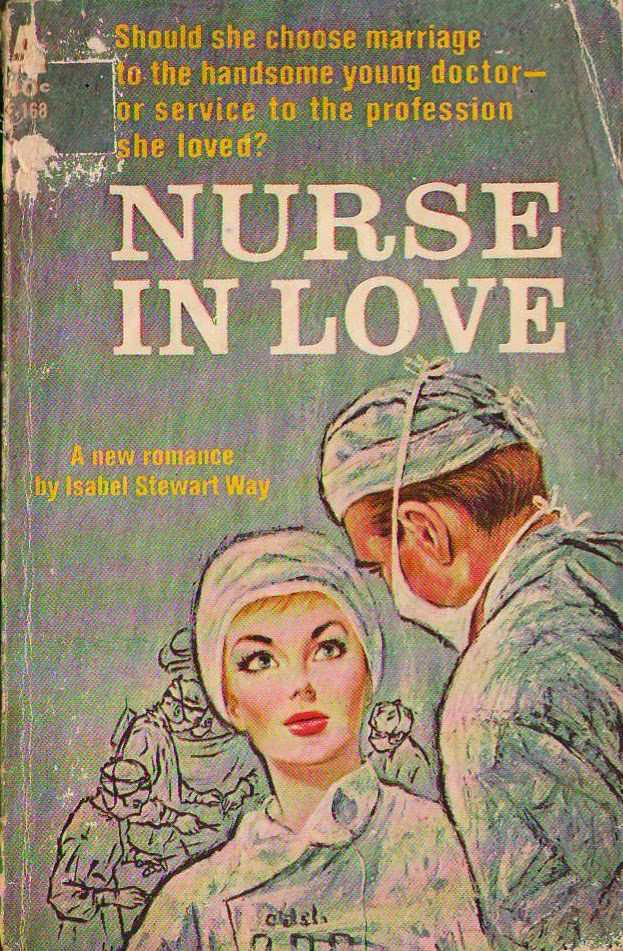 To Julie Stone nursing was more than a profession. It was a way of life, and she approached it with competence, determination, and dedication. But to handsome Merc Albeny, the intern whom she intended to marry, medicine was only a hobby. His real profession was women. Then, into the tangle of two young lives, came Dr. Dave Banner. Dr. Dave was old enough to advise Julie on affairs of the heart, both medical and romantic—but young enough to care. Nurse in Love is a deeply moving story of medicine and those who practice it. Under each white robe beats a heart you will want to know and understand.

GRADE: C+
BEST QUOTES:
“He wore a beard and his greasy dark hair was ducktail-cut; even his skin had a dingy look. A beatnik—when beatniks were no longer in style!”
“Any girl likes to have a handsome boy friend drop in at such times; it gives her prestige by certifying that she is attractive!”
“A doctor can always make a good impression by coming late, after he’s been delayed by a big emergency!”
REVIEW:
Julie Stone is working at Sea Memorial Hospital in California when she is abruptly told by the nursing supervisor that she is going to take a new job, with local neurosurgeon Dr. David Banner, and will be moving out of the nurse’s dormitory and into an apartment with Dr. Dave’s two other nurses over the upcoming weekend. Uh, OK. Julie “felt a wave of rebellion, and opened her mouth to tell how she felt about the high-handed way the affair had been arranged. But habit stopped her—the habit of taking orders from the Superintendent of Nurses. So she swallowed her resentment and did as she was bidden.” These VNRN heroines really need some gumption.
As further proof of that, Julie is engaged to Dr. Merc Albeny, a brash, charming, attractive intern who won’t marry her until he is established. “She loved Merc—how could she help it?—yet something seemed wrong. Instead of the rapture of being in love, Julie felt irritation and troubled questioning, and a queer vague unhappiness when she was away from Merc and his blond charm.” She’s apparently not accustomed to saying no to doctors, either, or she’d be out of this jam in a jiffy.
In Dr. Dave’s clinic, she meets beautiful, 17-year-old Carlinda Haynes, who has epilepsy and as a result has been all but written off by her wealthy parents, who are so “ashamed” to have an epileptic as a daughter that they reveal the secret they had not even told Carlinda, that she is adopted, lest anyone think she had inherited this shocking disease from either of them. Julie helps convince Carlinda to go through with the long series of tests with Dr. Dave, who she is convinced will be able to cure Julie. Merc, meanwhile, is using Julie to butter up to Dr. Dave, in the hope that the well-established and highly regarded attending will be able to throw the new resident some work with rich patients who might benefit his practice down the road. Julie is horrified by Merc’s grasping ways, but instead of dumping Merc, she just feels disloyal for her unflattering opinions of Merc, and never mind how accurate they may be. Then Merc decides that he can best take advantage of Julie’s growing bond with Dr. Dave by getting engaged—and now that they’re engaged, “It seems foolish to wait, if we still do have to wait,” he says urgently after kissing her “vehemently” on a moonlit beach. Uh, yes, you do, pal.
Back at work, Carlinda is found to have been suffering the effects of an undiscovered subdural hematoma, and one quick brain surgery later, she is back to normal! And so great is their relief at their recovered patient that Julie and Dr. Dave kiss in the clinic hallway! “And it was as if it were the first time she had ever been kissed,” of course! In an attempt to resolve the issues this little episode has raised between them, Dr. Dave decides to tell Julie that he is in love with her. “Can’t we let it go, now? Can’t you bury it, and go on just as we have been going on—working together?” Uh, sure, Doctor. Everything is soon put to rights, however, when in a shocking coincidence of crossed paths, Julie discovers Merc and Carlinda kissing in the gift shop, and Dr. Dave wanders in as well just a minute or two later, and chews out Merc, who is supposed to be on duty in the ED. Carlinda tries to take the blame, but Dr. Dave declares, “A doctor needs will power to refuse, and the ability to make his own decisions,” two qualities, it must be pointed out, that Julie utterly lacks as well. The only possible hope we are given for her is at the very end, when Merc proposes and she declines, and then tells Dave that she wants to marry him and “bear your children,” if you can keep your gorge down when you hear it.
This is a pleasant little nothing of a book, a faint, floral perfume that quickly wafts away. Julie is far too passive and vapid to be an enjoyable heroine, even when she’s pounding on Dr. Dave’s chest in the final pages and he calls her a “spitfire,” the liar. It’s not badly written, and the antiquated ideas—that epilepsy and out-of-style beatniks are mortifying, to name a couple—are amusing, and if you are interested in neurosurgery, you get to witness a couple of well-described surgeries, but that’s really all this book has to offer, apart from a great cover illustration.
Posted by Susannah at 6:59 PM No comments: 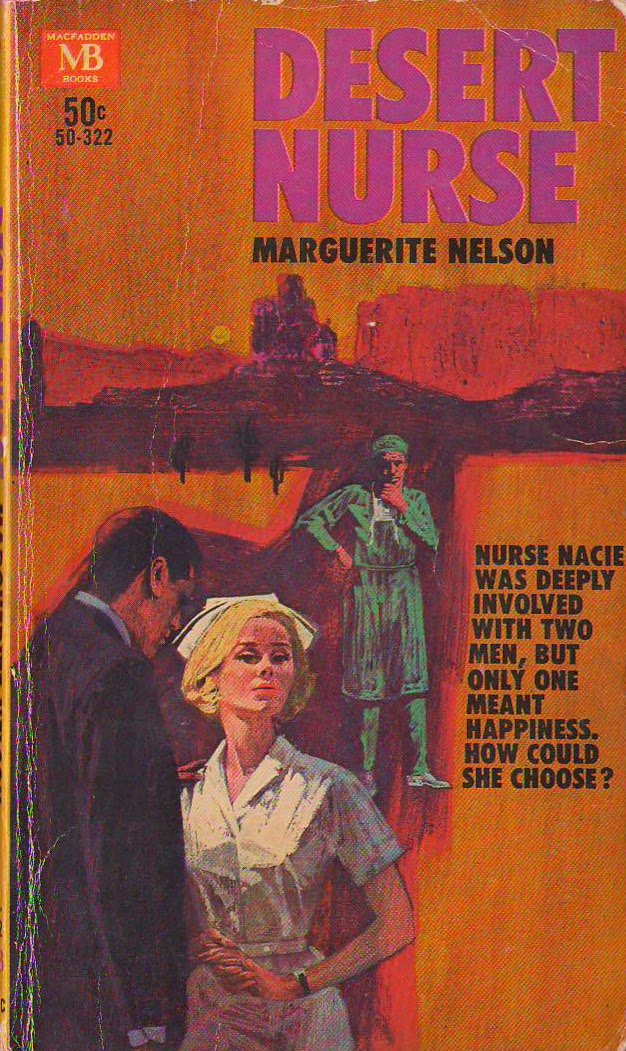