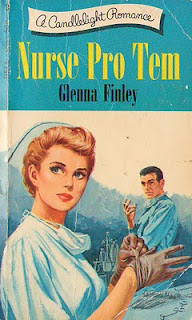 The trouble between lively, sandy-haired nurse Jane Chapin and handsome Washington attorney Joshua Blake began when they met at the Continental Broadcasting Studios. It was a simple case of mistaken identity—he thought she was an impudent receptionist and she thought he was an aspiring page boy. But what followed turned out to be an intricate matter of international intrigue that involved them both in a dangerous series of romantic double crosses; curious quirks of fate and terrifying realities that threatened both their lives and their love. The truth was the only thing that could save them—but they would have to ignore their own gnawing doubts long enough to find it.

BEST QUOTE:
“Honestly, Jane, I think you should be turned over my knee and applauded in the Victorian manner—with one hand only.”

REVIEW:
This is the smartest vintage nurse romance novel I have read yet, and Jane Chapin may be the worldliest heroine. She grew up in South America because her father was a petroleum geologist: “I can’t help it if I’ve spent as much time in my life speaking Spanish as I have English,” she tells a friend who laments her poor accent. She attended “a famous eastern nursing school,” and then went to work for an oil company. She just came from a two-year stint for them in South America, and soon will be heading off to the Middle East. In the interim, she’s hired temporarily (hence the pro tem) by Frederick Hall, old family friend and head of a radio broadcasting company that produces international programs.

This book reads like a 1940s film. People are always saying smart, snappy things like, “I’m garnering a built-in resentment against efficiency experts, cocktail circuit Lotharios and State Department statisticians.” In the opening scene, Jane mistakes Joshua Blake, an attorney brought in to boost the company’s production, with an applicant for a page boy’s job, while he thinks she’s a secretary. She’s rude, and he gets mad. There’s a fatal encounter with an ink bottle and another with a filing drawer, and hilarity ensues. When they are forced to have a drink together, she insists on paying for her Tom Collins, and he tricks her into paying for his gin and tonic. And so they develop the relationship of oil and vinegar. “I don’t know when I’ve seen anyone rise to a snide remark more energetically,” he tells her. “You’re in the ring before the bell sounds.”

Her competition for Josh’s affections is “statuesque apparition” Ellen Barton, daughter of a company vice president, who in one scene wears a “wispy black chiffon stole. Her dress was cut in a daring décolleté of the same material but cleverly draped in soft folds from the shoulders to remain in perfect taste. Not a strand of her silver gilt hair strayed from the careless perfection of her pageboy coiffure, and marquise-cut diamond earrings matched the styling of the diamond brooch on her dress.” Yeah, but can she speak Spanish?

The plot takes an interesting turn when company producer Emilio Forcada is bashed on the head. Emilio is married to “the daughter of the dictator of one of those hot little Caribbean islands our government is trying to cajole for a U.S. missile base,” and he’s having an affair with Anita Warren, the head librarian. So there are a number of possible suspects there. But then Jane’s apartment is ransacked, and Fred Hall is also attacked before the bad guy is brought to justice. The clue is a bit of poetry by John Donne left by Emilio after his attack, and Jane and Josh, when they aren’t sniping at each other, are working together to try to figure out who it is. This mystery gives the book a bit more dimension than other vintage nurse romance novels.

Beyond the witty dialogue, the book esteems intelligence. One of Jane’s friends and colleagues is studying for a master’s degree. Emilio is working on a program setting to music famous poems by South Americans — and the book lists actual poets, including Alfonso Reyes, Rubén Darío, Leopoldo Lugones, Jose Chocano (though they misspell Chocano). I knew this was not going to be an ordinary book when I saw the quote from John Donne on the dedication.

One character is, I would swear, gay, though he married. Horace Cole is “a very emotional fellow.” When we meet him, he has “breezed through the dispensary door and collapsed comfortably on the wide leather couch. … He put his hand over his heart theatrically. ‘You see before you a man tottering on the brink of exhaustion,’” he tells her, and his following witticisms — “why the cold and stony?” “why don’t you stop rearranging those instruments? You’ll wear out the shelves,” “I won’t share the couch, but there’s a chair in the corner” — would do Hepburn and Tracy justice.

Jane has an interesting feminist-antifeminist tug of war with herself. On one hand, she absolutely refuses to accept any misogyny from Josh, and repeatedly sets him straight: “Mr. Blake, you’re in the wrong century,” she tells him after he mentions “those rumors of unhappy American women with too much freedom.” She tells Dr. Jamieson she objects to the (then) modern view of finding a spouse: “The irritating aspect is the bland assumption that a woman is expected to ‘queue up’ as if she were waiting for a London bus while a perfectly ordinary, and I might add, rather ill-tempered man decides whether she happens to suit his particular mood of the moment.” Yet, of course, when Josh is around her knees and her backbone go all to jelly: She lets him order her meals in restaurants and “gratefully accepted his guiding touch on her arm” as they pass through a restaurant. To her credit, she recognizes this conflict: “Jane was suddenly appalled at the ease with which she seemed to be deferring to him in all the important decisions.” Josh himself seems to admire her strength, and tells her, “Most of the time you look like a reasonably intelligent kitten,” for what that’s worth. He even calls Jane “a true feminist” — after she’s admitted that the only poets she knows of, other than South Americans, are Christina Rossetti and Edna St. Vincent Millay.

I have to take a quick detour to the book’s cover. I am intrigued that the illustration shows the doctor—a surgeon, apparently, from the instrument-covered table beside him—smoking a cigarette. Also, since none of the doctors in the book are surgeons—Jane certainly never participates in a surgery—and it’s a stretch to say that she has any interest in one (Dr. Jamieson suggests that he is smitten, but not heavily, and she has no romantic feelings for him), I have to wonder how this cover came about. But, despite its thin relationship to the actual story, it’s still a pretty good one.

The inside of the book is also not without flaw. Some parts of the plot, such as the explanation as to why Josh has come on board (something about congressional appropriations and government radio transmissions), are a little confusing and require multiple reads to figure out. Also, toward the end of the book, Jane and Josh have spent the entire afternoon together when Jane suddenly realizes she is in love with him, and then thinks, “If Ellen were to be believed, the announcement of an engagement between them was only hours away,” so she abruptly says goodbye forever and walks off. This engagement came as news to me, as we were certainly not witness to any such exchange between the two women. I’d be more forgiving of these out-of-nowhere plot turns if they didn’t involve a key aspect of the story. I’m a little curious how this argumentative couple is going to work out, but the book’s blemishes are not too severe, and they don’t detract from the interesting, smart, and witty story. Nurse Pro Tem is a pleasure to read, and a very enjoyable detour from the usual fare.
Posted by Susannah at 8:21 PM