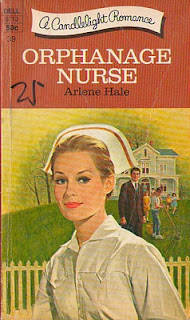 Young, attractive Christine Morgan became a nurse with one end in view—to work at Maple Crest, where she had been raised as an orphan after her parents’ tragic death. There were delightful youngsters in need of loving care at Maple Crest. There was also handsome Dr. Aaron Hoffman, to whom Christine lost her heart, and irrepressible “Fuzz” Kraus, who wanted her to marry him. There was a dire threat to Maple Crest from crusty old Matthew Chancellor, who owned the luxurious estate next door, and dark mystery in his beautiful granddaughter’s strange behavior. All these vivid human threads interwove in a challenge Christine had to meet—to save the place she held dear, and her chance for happiness with the man she loved.

GRADE: C-
BEST QUOTES:
“She wore a white uniform like most women wore a Givenchy gown.”
“Sickness of the body, she could do something about. But hunger of the heart—that was another story entirely.”
“He’d met several interesting women since coming to Bardwell. There was a cute secretary, that one nurse with the red hair and a society dish that had a cute little way of walking and talking.”
REVIEW:
Somehow, between the title and the cover, I had a feeling this book was going to be a little nauseating. Sometimes my premonitions are wrong (see Surf Safari Nurse and Hospital in Kashmir), but sometimes I am right on the money.

Without further ado, I give you Christine Morgan, the eponymous orphanage nurse. She was an orphan herself, a former resident of Maple Crest Home for Children, after her parents were killed in a car crash when she was 14. She dedicated her life to becoming a nurse and has returned to Maple Crest to assist the vintage caretaker, Sarah, in bringing up 25 fresh-faced young orphans.

The orphanage doctor, Aaron Hoffman, is a quiet, sneering guy. Naturally, Christine is in love with him. We have to be told this repeatedly early on, because the doctor has no redeeming qualities that I could see, and without all the signposts you’d never believe it.

The crotchety old millionaire next door, Matthew Chancellor, hates kids, and has a tempestuous relationship with his only relative, granddaughter Sherrill, who has quit college and just returned home to the mansion. In a shocking coincidence, at the same time a newborn baby turns up in the orphanage bushes. The label has been cut off the blanket the baby is wrapped in, yet enterprising reporter/asshole Pete Jennings tells Christine that the blanket is sold by “only five stores in the entire state.” Boy, with skills like that, Pete is going to have no trouble finding his “big story” to make his name. He’s convinced that his big break is this baby story, and he’s going to track down the mother and spill her humiliation in the papers. But since the publicity about the baby is good for the orphanage, Christine and the doctor keep inviting him in despite their dislike of him and his recurrent rudeness. (Curiously, at the end of the book when Pete finally has the facts nailed, he makes a surprising about-face for no apparent reason and opts not to publish the story after all.)

In the meantime, Sherrill offers to help out at the orphanage. Once in the door she has a tendency, sometimes during a crisis about a sick or runaway child, of throwing herself into Christine’s arms and sobbing about her grandfather, who quashed her relationship with local kid Billy White, who was later killed in Vietnam. Christine responds by confronting old Mr. Chancellor about his hatred for the orphanage, telling him—prepare yourself—“You’re afraid to come to Maple Crest. Afraid you might discover you’ve got a heart after all.”

Sherrill is becoming increasingly attached to the baby, now unfortunately named Dawn. Christine quickly comes to depend on Sherrill, and within two days of Sherrill’s arrival on the scene, Christine has no qualms at all about leaving a college dropout who can’t be more than 20 years old in charge of 25 kids and an infant while she runs off on dates with Dr. Aaron and Donald “Fuzz” Kraus, who is desperately in love with Christine. Aaron is also falling for Christine, and we are treated to endless insecurities on both sides of the relationship, which gets old mighty fast. The only thing more cloying is the syrupy language of their blossoming love: “For a moment, their eyes met and held, and when he reached out to take her hand, she reached halfway. … The pressure of Aaron’s fingers around her own was a sweet, sharp pleasure.” It gets worse, but I’ll spare you.

As the book moves to its ending, Christine declines dinner with the doctor because Fuzz has asked her out, and at the end of their date he “pulled her into his arms and kissed her soundly.” You will be as surprised as I was when he tells Christine just a few hours later that he’s in love with Sherrill and wants to marry her. His fickleness is capped only by Sherrill’s, as we learn that she was actually married to Billy White not much more than nine months previously. In a way, it’s a sad indictment of commitment and responsibility, but somehow I doubt that the author had such heavy themes in mind when she penned this throwaway.

In the event that you haven’t foreseen where this review is going (which should be about as hard to fathom as the “surprise” ending of this book), let me spell it out: Orphanage Nurse is treacly, insulting to the intelligence, and amazingly improbable. Don’t waste your time.
Posted by Susannah at 4:53 PM