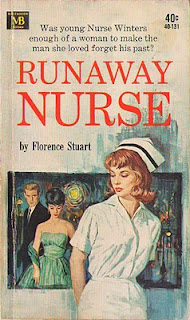 “Your man hasn’t broken away from the past—and never will.” Nurse Gail Winters tried to forget her mother’s words. She and Dr. Craig Hadley were in love and that was all that mattered. But was it? Craig was divorced. He had nothing but hatred for his former celebrity wife, Vera Vaughn. But there was a matter of a million dollars involved and Vera was a very greedy woman. All Gail could offer Craig was her love. But was that enough when his ex-wife was offering him his child? It was a game with high stakes—and the winner would take all.

BEST QUOTES:
“How about some lunch before you go? I have some nice indigestible frankfurters.”

“ ‘Now when I was a kid, about your age, there was a character known as Popeye who was something of an authority on spinach. Is he around any more?’
“Bobby’s round blue eyes gazed up at her with utter disgust. ‘Oh, to hell with Popeye,’ said Bobby.”

“As always, Gail longed to take the child in her arms, to give him a big bear hug. But a bear hug could kill Jimmy.”

“This was a good neighborhood, the homes in the thirty or forty-thousand-dollar class, the cars mostly Cadillacs.”

“If I hadn’t tried that judo hold we nurses are taught, she might have killed me.”

“Gail sat very still, her hands clasped in her lap, and found herself wishing fiercely, a bit madly, that she had a shotgun.”

REVIEW:
Gail Winters has something no other vintage nurse romance novel heroine I’ve ever met has: a divorced fiancé. Well, at least she’s not the one with the divorce, which would impugn her virginal status. But even more scandalous is the fact that Dr. Craig has a five-year-old daughter. Ginny was born with a heart condition—“some heart veins were on the wrong side,” we are told, these days known as transposition of the great vessels, for all you aspiring cardiologists out there. She had surgery at age 18 months and barely survived the long odds, but now she must be kept from the least stress or pressure lest her defective little heart explode or something.

Naturally, Mommie Dearest isn’t helping much with this. Craig’s ex-wife, Vera, is a fabulous piece of work, in the noblest glamorous-fading -starlet-run-amok tradition. She’s still got it, but not for long: “Despite her forty-three years, Vera was still a lovely-looking woman, even now, in the morning.” Pregnancy, rather than bestowing her with a beatific glow, just “ruined her figure.” When Ginny lands in the hospital with pneumonia, Vera shows up, “a stunning, black-haired woman, wearing a white wool suit collared in flattering white fox fur,” leaning over her delirious child and seething, “You’re the most exasperating child. Screaming tantrums, now this. As if I didn’t have enough on my mind already.” Vera stars in a TV show that is losing sponsors by the minute, but she has the idea that if she can get Ginny on the show—“Ginny is perfect for the part of my obstreperous little stepdaughter, just perfect!”—her ratings will climb back up again. Dr. Craig and Gail, however, are of the opinion that the stress would kill pathetic little Ginny.

Vera had a hardscrabble childhood, living “in a horrid little flat above a cheap, smelly delicatessen where her German father sold greasy sausages and revolting concoctions that were enough to turn your stomach. The odors that came up from that shop were sickening … and out of them were born Vera’s determination to get away to be somebody, to get hold of money.” In what could be a smart bit of writing or just a fortuitous accident, the author ends this description of Vera’s motivations with a subtle study of contrasts: “Now, at forty-three, what did she have to show for all her splendid dreams, for the hard work and sacrifices of a lifetime? She rubbed herself dry with an enormous towel, slipped on a yellow satin robe and went back to the bedroom.” In her California mansion, Vera has clearly come a long way from the delicatessen, but it’s just not enough for her insatiable appetite.

And the main fuel to her ambition is the million bucks that a rich dying patient bequeathed to Dr. Craig, though he really intended it to be for Gail, who had cared for him in his final days. He couldn’t just give it to her, apparently, because his greedy, thieving relatives would contest the will and “make something nasty of it.” To protect Gail’s reputation, the thoughtful old dear, he gives it to her fiancé—but then Vera gets the idea that if she marries Craig, she’ll get the money. And Ginny is the perfect bait to lure him into this trap.

You know exactly where this book is going, but it’s a fun ride. I expected greatness from Ms. Stuart, who also penned The Nurse and the Orderly, another camp fest. The only problem is that it gets an idea and really beats it hard. Of the three main female characters—there’s a head nurse in the mix—two of the three are bona-fide psychotics, complete with stopovers in the loony bin on their resumes, and the third (that would be Gail) is repeatedly accused of being one. And as fabulous as Vera is, she’s a one-note wonder that wears a bit thin with repeated pounding. A little less exposure to her ranting would make her a more worthy character.

One unique aspect of this book is how it lets us into the delivery room. We get to witness two babies being born, both of them to teenagers, curiously. One of the doctors is “palpating Hilly’s abdomen with one hand while his rubber-gloved left hand explored the pelvic region”—a possible shocking reference to a vaginal exam!! (Could this bear any relationship to the persistent VNRN fascination with a doctor’s long, slender fingers?) The patient is in labor, and he’s telling her to “just relax and doze off if she felt like it.” Do you suppose the author has actually experienced childbirth?

More of a quibble is that Runaway Nurse is another one of those titles that has very little to do with the story. There is, in fact, a point near the very end of the book where Nurse Gail Winters takes off with Ginny, but the whole situation seemed so unimportant, resolved in a few pages, and occurred so late in the book that I didn’t really associate it with the title. But with such a great cover illustration, and a magnificent story inside, I forgive all.
Posted by Susannah at 12:30 PM