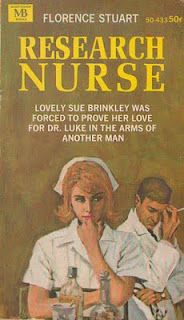 Nurse Sue Brinkley’s life had seemed complete in the arms of handsome Dr. Luke Connor. But the time came for her to prove her love—when a man from her past pleaded for her help and her heart. She went to him—and suddenly her life was torn by fear and terror.

“I’ve had experts try to make out with me. The best never have any luck, and your approach is rather amateurish.”

“Oh, stop sounding off like something out of a book for morons.”

“Since he firmly believed that mental disturbance triggered a vast number of physical ailments, Luke was not surprised to awaken with his temperature way up, his head splitting, and the worst cold he had experienced in years.”

“She knew the explanation of alcoholism. The victim was allergic to alcohol, and after one drink hit the blood stream, some compulsion in the brain took over. And that was it.”

REVIEW:
Once again, writer Florence Stonebraker has chosen a title that has very little to do with the actual book within. Nurse Sue Brinkley is a nurse in Los Angeles, trying to decide whether she should marry Dr. Luke Connor, when she gets a love letter from Dr. Carl Favour, who actually is doing research, on leukemia. Carl was the major crush of her adolescence, when she was a self-described “moronic, idiotic, lovesick, sixteen-year-old problem brat,” but when she told Carl of her feelings, he laughed in her face. Crush over. Now, nine years later, Carl writes that he’s always loved her and wants her back—and, by the way, his brother Bob is dying of leukemia and needs her nursing skills. Luke, curiously, takes the position that Sue should go to Carl and take care of Bob, as in so doing he feels she will learn if she is still in love with Carl. “You sound like you’ve been sniffing glue or something,” she responds, but eventually agrees to go—more to help Bob than to see Carl.

Carl is living in Clayton’s Castle, a 60-room mansion in which a young bride scorned her old, wealthy husband and was locked in the ballroom on the top floor until she jumped to her death. He spends most of his time in the basement doing research, but he’s assisted in the upkeep by Pete, a shotgun-totin’ ex-con who guards the gate, and Laura Blaisdell, the old family housekeeper. To say Laura is mean and nasty is an understatement. She feeds Bob a starvation diet of broth and skim milk, and leaves a bottle of barbiturates on his bedside table in the hope that he will decide to swallow them all down one day. “You’re just a worry and a burden for your brother to carry and do for—a brother worth ten thousand useless, worthless bums like you,” she tells him before Sue cuts her off and orders her from the room. Bob’s also getting odd phone calls in his room in which a woman’s voice tells him, “Why don’t you jump, you bum?” But no one seems to piece together who might do such a thing.

Bob, home from the (Vietnam?) war with a diagnosis of malnutrition after months in a prison camp, has been given the death sentence of leukemia by his esteemed brother. However, no other doctors have been consulted on the case, which Sue finds strange. Then Dr. Carl starts getting creepy. When Sue returns from a drive into town, he says that she should have asked his permission. When she stops laughing, he adds, “I would like to feel that you regard my wishes as a command you are only too happy to obey.” Before long, she learns that Carl is keeping his and Bob’s alcoholic mother, Siggy, prisoner in a room down the hall, the closets full of cases of whisky to keep her out of commission. Sue drives home to see Luke and talk things over with him—and finds that Luke has learned that Carl spent time in a mental institution after he deliberately injected a child who was allergic to penicillin with a large syringe full of the stuff and kills her. Luke helpfully tries to rationalize Carl’s actions, though he himself is worried literally sick, because he can’t talk her out of going back to the house.

Carl soon tells Sue that he is planning to inject cancer cells into Bob and then try out this new curative serum on him. It doesn’t work, so Bob will certainly die, but what Carl learns from the experiment will help further his research. Siggy even overhears this conversation—but instead of running straight to the cops, Siggy concocts a fabulous plan for Sue to marry Bob so as to rescue him. It’s not clear how this is going to happen, as it would be about as easy to smuggle the vicar past Pete as it would be to get Bob out. Then Sue remembers the gun in her car. “Bob had been through jungle fighting. Bob would know exactly how to handle a revolver. He would know how, if necessary, to take a pot shot at Laura; just a harmless little shot, the kind that would knock her senseless, but result in no serious injury.”

How everything works out in the end is pretty typical, dopey stuff, even stooping to include babies switched at birth—not very satisfying at all. There are occasional flashes of Ms. Stonebraker’s usual witty writing, but the plot is drawn-out and silly, and the heroine is a total imbecile. I remain a devoted fan of Florence Stonebraker, but this is not one of her best, so you might as well just leave it on the shelf and re-read one of her better books (e.g. The Nurse and the Orderly, Runaway Nurse) instead.