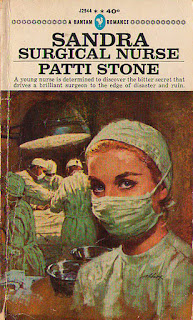 A surgeon tormented by his past—a beautiful nurse deeply in love. Two figures struggled through the midnight blizzard up to a lonely, snow-shrouded farmhouse. They were just in time. Working in the feeble glow of gaslight, a courageous doctor saved the life of a woman and her new-born baby. When it was over, the nurse spoke softly to her exhausted companion: “They would have died. Two lives saved because of you. You can forgive yourself now, can’t you?”

“I’m in for a nice hunk of broken heart and that’s something you can’t put together in Surgery.”

“If she is going to catch Tod, I’ll see to it that she’ll be one bride who is able to cook whether she wants to or not!”

REVIEW:
Sandra O’Shea is a “suture nurse” at Queens Hospital in Gereton, Indiana. This is apparently the equivalent of a scrub tech today, as she spends her days slapping instruments into surgeons’ hands. We meet her on her first day at Queens, as she’s just finished her training as a surgical nurse back home in Iowa. Her new workplace holds a bit of a mystery: Two surgeons who are brothers, Rand and Frank Cox, haven’t spoken to each other in two years. Of course, in a VNRN the mystery is quickly brought to light: The boys’ father was the chief of staff at the hospital, and on a hunting trip out in the boondocks with his sons he slipped and accidentally shot himself in the chest. At the nearest rinky-dink hospital, Dr. Rand had insisted on operating, though Dr. Frank had wanted him to be flown to a city hospital, and Rand attempted the surgery and their father died. Dr. Frank accused Dr. Rand of killing their father, and this had not exactly made for warm feelings at work.

On the job, we hear a lot about a couple of unusual physical traits Sandra has. She’s “a big girl, graceful even in the awkward surgical robe, and taller” than her surgeon. She is constantly obsessing over this: “How she hated her size!” When an intern congratulates her for being able to restrain a wild patient, she snaps, “I know exactly how big I am and that I’m a corn-fed country girl!” She tells her roommate she’ll never get a date: “I know what I look like. I’m too big and generously shaped.” She’s “too big and husky,” “much too big,” “a big lumbering peasant.” Mysteriously, after much moaning over this fact, it’s dropped halfway through the book, and we are only told in passing that she might not have made through that snowstorm if she hadn’t been so hale and hardy. But perhaps to make up for this particular deformity, she is one of the rare women in a VNRN who has the magical hands: “The hospital grapevine had already carried news of the new blond nurse with the soft voice and the strong skillful hands.”

Anyway, before long, the quiet, serious one—Rand—asks Sandra out on a date. But she can’t go, because she’s promised the church square-dancing group that she’d go to the dance that night. Drat! Then who should turn up at the dance but Dr. Frank, who is apparently stalking her? And when there’s an emergency and she and Dr. Frank have to go directly to the hospital in their square-dancing clothes, who should be there at the door when they come in but Dr. Rand? Double drat! He, of course, is convinced that Sandra is dating Frank and goes all Frigidaire on her—not that you can tell the difference from how he was before. So even though she really prefers the cold and frosty brother, she starts going out with good-time Frank. And Rand, Sandra tells her roommate, “ ‘is trying to stay away from me too. Oh, he still requests me for difficult operations, so I guess he doesn’t think I’m a total loss.’ Not as a nurse, she thought ruefully, but definitely a loss as a friend? As a woman?’ ”

Then during a Christmas Eve blizzard, when Sandra’s home alone feeling maudlin and full of self-pity, Rand pounds on her door. He needs her help to deliver a baby at this farmhouse out in the country. After Rand has saved both the baby and the mother, they drive back to town and Sandra invites him in for coffee cake. Before three minutes have passed, Rand has broken down over his belief that he killed his father, Sandra has comforted him, Rand has proposed marriage, and Sandra has planned the wedding: “Like any girl, I want my parents with me. I want to wear the most beautiful dress I can find, and my mother’s wedding veil—and of course I want to be married in church.” It’s to be a small wedding, though, close friends and family only, and her mother will make her dress, and well, “there will be all sorts of arrangements to be made. Maybe by rushing things we can be married on Easter Sunday.” Instead of running screaming for the door, Rand instead “agreed meekly.” And we still have 25 more pages to get through.

So to give us something to do, Dr. White, the aging Chief of Staff, obligingly drops with a heart attack in the OR, and despite open-heart massage, Rand is unable to save him. Dr. White’s gorgeous daughter calls Rand a murderer—it’s déjà vu all over again—and he runs off. While driving out to see him, Sandra and Frank witness a plane crash into a housing development. They’re trying to rescue a man trapped in a burning house when the building collapses on them. Frank’s arm is badly injured, and the doctors at the hospital are insisting that it must be amputated—though it would mean the end of Frank’s career as a surgeon. Only Rand believes the arm can be saved, and calls in a prominent orthopedic surgeon. As he’s wheeled into the OR, Frank apologizes to Rand for calling him a murderer, and now the only thing left to be saved is Sandra’s Easter wedding … 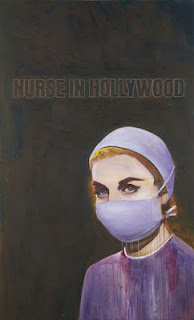 The best thing about this book is the surgery. It’s accurately described, and we get lots of it: a Whipple, an appendectomy, a Caesarian, and of course the fight to save Frank’s arm. I also liked Sandra’s relationship with her roommate, Peggi (yes, spelled with an i), though I wished Peggi weren’t so obsessed with “catching” intern Tod, who runs hot and cold on her. Beyond that, though, this books runs toward the saccharine, and Sandra’s attraction to the dour Rand is completely inexplicable. The cover is great (apparently Richard Prince thought so too; part of it is featured in his work “Nurse in Hollywood #4”), but the book is not much.
Posted by Susannah at 11:54 AM