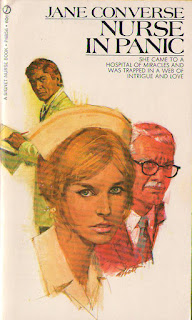 Diane Whitley was reluctant to leave her nursing job at Greenhaven Memorial for a position at a strange clinic in the desert. But the promise of an exciting new medical discovery and the possibility of a new romance made the trip seem very appealing. Yet the moment she arrived at Hollingsworth Clinic she felt a vague sense of uneasiness. At first she thought she was just being foolish. Dr. Darryl Hollingsworth was a dedicated man and his handsome assistant was an earnest medical student. It wasn’t until she found herself falling in love that she realized how foolish she really was—and how easily a mirage of happiness could become a well of heartbreak … and terror …

BEST QUOTES:
“He remembered that he hadn’t told Diane that he loved her. ‘I don’t have to say it, though, do I?’ ”

REVIEW:
When we first meet Diane Whitley, RN, she is serving her best friend, Polly Cravelle Richards, a dish of cherry Jell-O unadorned by even a dollop of Cool-Whip. Diane has taken a pause in her jet-set life to attempt to persuade Diane to leave her dull, dull life in —“there isn’t one single, eligible male on the staff at the hospital. Not one!” Diane complains—to come work at a clinic where a revolutionary doctor has found a cure for cancer. Dr. Darryl Hollingsworth has discovered a medication, Tychorodryn, but despite his miraculous results, he has been dismissed by the medical community at large. Her advocacy on behalf of the Hollingsworth Clinic has a personal note: Her dear wealthy father has come down with a “terminal” case of cancer, but has personally benefitted from the magic touch of Dr. Hollingsworth and is “pepped up like a teen-ager.” In gratitude, Dad is about to bestow a huge chunk of his fortune on the good doctor, and Polly is crisscrossing the country to drum up further support amongst the family’s close (also rich) friends.

You won’t be shocked to learn that Diane agrees to visit the doctor’s hospital in remote New Mexico, no doubt encouraged by Polly’s description of Steve Bates, a medical student on leave for financial reasons: “He’s unmarried, and all of the aides are over forty. You have clear sailing.” And you also won’t be shocked to learn that Diane and Steve quickly tumble for each other, and Diane agrees to stay on full-time. She quickly falls under the thrall of Dr. Hollingsworth, as she sees all his patients growing pink and energetic under his care, and begins to quarrel more with Steve, who is rightly suspicious of the whole situation and is investigating Dr. Hollingsworth on the side.

Before long, Diane finds herself alone on the night shift when Dr. Hollingsworth stumbles in, smelling of bourbon, and grabs her for “a smothering kiss.” This is especially awkward because Polly has told her that she herself is in love with Dr. Hollingsworth. Though Diane is quite clear about her disinterest in the doctor, Steve suddenly turns quite frosty. And despite her repeated rebuffs, Dr. Hollingsworth continues to grab her behind closed doors before she can shove him off—sexual harassment, anyone?—and it isn’t long before Polly catches him putting the moves on Diane. Though Diane becomes increasingly concerned about the fact that the patients seem to be sleeping an awful lot, she still argues with Steve every time they cross paths, making for page after page of detailed discussion about the many, many problems with Dr. Hollingsworth’s story and treatment, and Diane’s increasingly thin defense of same. Her professed inner doubts make her continued justification of the doctor even more aggravating.

Eventually, though, Steve has one too many arguments with Dr. Hollingsworth and leaves the medical facility. Diane soon decides that she should leave as well—but it takes her quite a while to get around to it, given all the sick patients who need her care and her paranoid feeling that she can’t tell anyone that she’s going, lest they try to keep her prisoner. As she’s sneaking out of the hospital at 11 pm, she unfortunately encounters Dr. Hollingsworth, and starts babbling that she’s going on a date and taking some clothes to a friend who’s helping out a poor Indian family—but the doctor cuts her off and starts doing some babbling of his own, about how he’s converted all his money into Mexican bonds or stashed it in a Swiss bank, and is planning on moving his practice across the border, and darling, won’t you come with me? “Don’t disappoint me, darling,” he says, grabbing her again—you’d think she’d know what’s coming by now and just run when she sees him coming.  car pulls into the nearby parking lot, but rather than scream, she tells him to let her go or she will scream. Naturally he slaps a firm hand across her mouth and drags her into the hospital, but she’s eventually able to jerk free and scream and run into Steve’s arms.

Dr. Hollingsworth naturally gets what he has coming—he’s shot to death by his long-suffering secretary—and Diane gets her man, too, who curiously proposed by suggesting that instead of accepting a loan from Polly, “I’d rather be supported by an R.N. who’s silly enough to go back to work … put me through school.” How could she say no?


It’s a hackneyed story made all the more irritating by our heroine’s stupid inability to see the obvious, though she herself has doubts all along. The endless pages of back and forth about whether Dr. Hollingsworth’s treatment is for real quickly become monotonous; it’s a short story, and not a very good one, stretched into a novel. The writing is perfunctory and the entire situation is baffling, and I am baffled as to why anyone should read this book.
Posted by Susannah at 8:44 AM