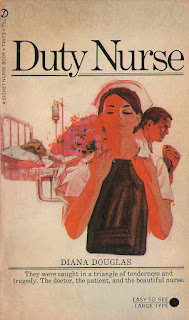 The girl in room 17 was so young and lovely and had so little time left. How could the doctor deny her anything ...  even himself? The duty nurse was kind and wise beyond her years. Could she deny her tragic patient anything ... even the man she herself loved?

BEST QUOTES:
“She is a woman. That’s the first thing I noticed about her.”

“Probin is like all hospitals, it doesn’t believe in encouraging its interns by overpaying them.”

“The guy has his good points. He’s asked me twice for a date.”

“You had to use psychology if you wanted a date with a girl like Sandra.”
“A man needs the kind of incentive only a wife can give him.”

“Jim Macauley was very immature, even for an intern. And that was saying plenty.”

REVIEW:
It is hard for me to believe that Richard Wilkes-Hunter actually penned this book. Only one solitary reference to a patient’s “firm young breasts” gave any indication that it just might be his work, after all. At book’s open, nurse Sandra Bethune is arriving at Probin Memorial Hospital in San Francisco for her new job. The cab in front of hers also sports a new addition to the medical staff: Dr. Peter Stewart: single, 26, and hot. And he likes the looks of Sandra, too: “When I marry it will be to a woman who looks like her, with a pale olive complexion and black hair that always looks freshly brushed, with a natural sheen of youth and health.” Frankly, I was looking for someone intelligent and kind when I married, but then, a good disposition may be highly overrated. In any case, Sandra is safe for a bit, as Dr. Stewart has planned to wait another two years “before he could afford to marry a girl, in the way he wanted.” These young doctors always talk about getting married like it’s picking up a loaf of bread at the supermarket. But we know how those plans are going to turn out, don’t we?

The two are thrown together right away when they are both caring for a new patient, Ava Sindell, who is 22 and admitted for anemia. We’re just waiting for her to give a cough to indicate that it’s a fatal illness, but Dr. Stewart’s thorough physical exam turns up an enlarged spleen, bleeding gums, and swollen lymph nodes, which will work even better. It’s too bad, because she’s so pretty, and legitimately quick-witted, smart, and sweet—for once a character’s actual behavior coincides with how other people describe her—but she’s got leukemia, which was fatal in those days. Unfortunately, the doctors and Ava’s family conspire not to tell her about it, so as not to destroy her hope or ruin her last month of life. I’m sure she won’t wonder why she needs all the steroids and blood transfusions, or why she keeps passing out.

Early on, Peter toys with the idea of asking Sandra out, but by the time he gets around to it, she’s accepted a date with someone else. Now Peter is certain that he’s lost his chance with her, even though she doesn’t really like this other man, and drops him after he becomes petulant and demanding. “That was the trouble with men, she thought. You went out with one a couple of times and soon he became over-possessive and thought he owned you.” For his part, Peter starts going out with Ava—at first, just to keep an eye on her after she’s been discharged so as to keep her from overdoing it and blowing her remission—but he quickly comes to care for her, and she easily reciprocates the feeling. And Sandra is left thinking that she’s lost Peter, all the while feeling rather conflicted about it, realizing this is her young patient’s only chance for love (cue the violins).

It’s clear from the beginning how this story is going to play out, but it’s told honestly and (I dare to say it) tenderly. Sandra is a strong, clear-eyed, intelligent woman, unlike any I’ve ever met in a Wilkes-Hunter novel, who firmly tells her would-be beau, as he rather nastily pressures her to marry him on their third date (being married to her would help him relax, he says), “It took me years of study and hard work to become a registered nurse and I wouldn’t give that up lightly.” Ava, too, is not so dumb that she doesn’t understand what’s really going on, and even Peter is a nice guy. There’s a bit of humor here, some unintentional (Sandra’s roommate is named Nancy Drew), and the writing is perfectly sound. Again, it is really hard to believe that this book could have been written by the same man who brought us the D-rated Resort Nurse, not to mention his seven other books of varying shades of C, because I have never seen even a hint of sensitivity or feeling in any of the other books written by him that I have read. But fluke or ghost-written, this is a lovely book.
Posted by Susannah at 2:58 PM