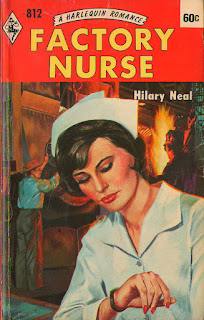 Brigid didn’t really want to give up hospital nursing to work in a factory, but her father had a particular reason for wishing her to. Robert Bairnsdale, on the other hand, hoped she would give up nursing altogether and marry him. Only Morley Scott was completely undemanding, wanting only the right to love her. If only Brigid would make up her mind how she felt about him! Perhaps, she felt, getting away from the hospital would help her to sort things out. But when she met Guy Wisden, the immensely attractive factory manager, it looked as if she had only exchanged one set of complications for another.

BEST QUOTES:
“Marriage was the last resort of the inept.”

“All experience being valuable, as my grandmother constantly reminds me. Usually when she wants a fire lit, or some such chore, I may say.”

“What men call feminine intuition is really an extremely rapid reasoning process. Men won’t admit that women can indulge in such swift logic, so they label it intuition, and tell themselves it’s a kind of magic. They don’t mind being beaten by magic, but they can’t bear to have women beating them at their own logical game.”

REVIEW:
You should not be surprised to learn that as this book opens, Brigid Flinders is leaving her post at the hospital to go work in a factory. The factory in question is owned by her father, but this is to be one of many secrets in this book: The factory has been making parts for a top secret government contract to build space vehicles, but for some reason the parts are all having to be scrapped for poor quality, too great a coincidence, and Brigid’s aging father suspects sabotage and asks her to go snoop around on site to see if she can figure out what’s going on. In addition to her job, Brigid is also leaving behind a few young men, of course: Dr. Morley Scott, who has been sweet on her for several years and who is constantly rubbing her arm but has never declared himself; and Robert Bairnsdale, a wealthy businessman whose father is her father’s partner and who never has time for her, but constantly pressures her to marry him.

Why stop at two young men when you can have three? Brigid is soon entwined with the factory manager, Guy Wisden, who lives downstairs from her. He starts out with a hard mouth, cold eyes, and a rude manner, but she soon tells him off. He takes this surprisingly well and they part with an “electric” handshake. Before long he’s kissing her; it’s actually a well-written passage that’s not at all hokey and simply evokes her passion.

As the mystery of who is sabotaging the plant’s production escalates, someone breaks into Brigid’s flat and Guy’s cat is murdered. Then Brigid’s father dies unexpectedly, and in a confusing bit of business, there is some buying and selling of the factory’s stock in a takeover bid that’s intended to depress the value of the factory so it can be acquired by a secret buyer, all of which was rather difficult to follow. There are several more attempts to injure Brigid, even kill her with cyanide-laced salmon, and Brigid and one of her friends at the factory figure out how the sabotage is occurring, but not quite who’s behind it. In the midst of all this, Guy runs hot and cold, Morley visits with middling success, and Robert becomes increasingly domineering as he tries to run Brigid’s business interests for her, now that her father has died.

Really, there’s an awful lot of plot here in 191 pages, more than in most VNRNs, and apart from the confusing business machinations, it’s largely managed with skill. The writing is clever in places, with well-drawn characters, and Brigid is a feisty gal who does her best to tell off Robert and his meddling family; the fact that it takes her several tries to put the message across strikes me as more realistic than irritating. The ending has a rather sexist twist involving Brigid’s inheritance, but the book is in fact 55 years old, so that can be forgiven. Factory Nurse is unusual in that the author clearly put a lot of effort into it, and fortunately for us readers, she has the chops to pull of an ambitious story that’s as action-packed as it is sweet.

Email ThisBlogThis!Share to TwitterShare to FacebookShare to Pinterest
Labels: sabotage, theme - standing up for her beliefs