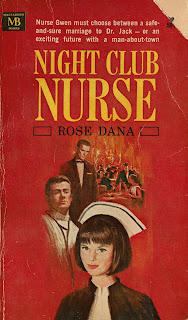 “So I’m jealous!” Nurse Gwen Hale remembered Dr. Jack Belson’s bitter words on their last date. “Night clubs have a big appeal for you lately!” She had to admit it was true. Her weekend job as backstage nurse in Tom Rapella’s night club had opened a dazzling new world. One that was excitingly different from her hospital duties: She also had to admit something else. Before she’d met Tom Rapella, her future as Dr. Jack’s wife seemed settled. But Tom was irresistibly attractive. And being near him did strange things to her heart …

“You look especially tantalizing in your uniform.”

“I want a pretty girl like you who can hang around in evening dress but be ready to jump to her first aid kit when she’s really needed.”

“A person is bound to catch something from time to time. I’d just as soon catch whatever I get from my dogs!”

“He’s an old rogue and a torment, but I’ll miss his lovely flow of abuse. What a vocabulary!”

“You’ve got a bad case of what is delicately referred to as romance.”

“If I ever almost fall in love again, I hope it’s with someone as nice as you.”

REVIEW:
I usually pick up a book by Dan Ross, here writing as Rose Dana (he also wrote nurse novels under the names Ruth Dorset, Rose Williams, and Ann Gilmer, as well as under his own name), with more than a little dread. I’ve reviewed seven of his books: five got a C or C-, and one each for B- and B+ (Arctic Nurse was the top scorer). But here, with Night Club Nurse, we have one of his best. It’s still just coming in with a B+, but I’ll take it.

Gwen Hale is actually one of the finer VNRN heroines I’ve come across—an independent go-getter who fights for what’s important to her and always wins. She works at a Manhattan hospital on the floor for rich patients, where she meets night club owner Louis Rapella and his son Tom. The pair convince Gwen to take a job at the Empress Club just above Times Square, working Friday and Saturday nights. She’s hoping to earn enough money to finance a trip to Europe, which is “one of those things I’d like to do on my own,” she tells her boyfriend, Dr. Jack Benson. Jack is initially shocked that Gwen is serious about taking this job: “You wouldn’t cheapen yourself by doing a thing like that,” he tells her, adding, “Cheapen me!” Which pretty much seals the deal for Gwen.

But the big surprise is that Jack does not turn out to be the usual VNRN boyfriend; instead of holding a grudge and making lots of nasty remarks for pages and pages, he quickly accepts Gwen’s decision: “I give in!” he tells her, and from then on is completely supportive. So I might forgive him for giving her “a playful slap on the cheek.” Her blossoming relationship with Tom Rapella, however, is another thing—that young man walks her home “arm in arm” after her first weekend, kisses her, and tells her, “I’ve been in love with you ever since I met you that day at the hospital.” For her part, Gwen acts a lot more smitten with him than she has with her fiancé, thinking, “She’d actually wanted him to say that he was in love with her,” and after they part, “she found herself lingering over the memory of Tom’s goodnight kiss. There would be no doubt in her mind if it were not for the others,” namely Jack and the club photographer, Gina Norel, a childhood friend of Tom’s who, though Gina has not let anything slip that might suggest as much, Gwen has decided is in love with Tom.

Now comes pages of debate about which man, which kind of love, she should choose: “Maybe her hours with Jack had been less romantic but they had been filled with good things; the solid understanding each other’s problems and each other.” Meanwhile, “Tom stirred her and gave her the feeling that life could be more exciting than she’s ever dreamed.” And lies to Jack about her dates with Tom: “It was all very casual and innocent,” she says of a dinner in which the pair discussed whether they should get married. Jack, for his part, is not falling for it. “Don’t play dumb,” he says. “I can stand anything but that coy dumbness you put on.” Here again Jack proves his worth—and his uniqueness in VNRNs—by not falling for a stupid lie and preferring an intelligent, honest woman to a fake stupid one.

While Gwen is batting her feelings and Jack’s around, she is also proving her value at the Empress Club when she saves a famous model who has passed out—Gwen astonishingly recognizes insulin shock and gives her Coke laced with sugar. After this brilliant diagnosis, it’s all the more shocking that she fails to recognize impending disaster with the aging cowboy Buck Gibson, who performs rope tricks as part of the evening show and complains of worsening headaches, increasing shortness of breath, and decreasing exercise tolerance. It’s not Gwen’s concern—“you should look after your health,” is all she suggests as he staggers off stage sweating alarmingly after his act—but an overdose of pain pills that gets Buck to the hospital. There Dr. Jack diagnoses him with coarctation of the aorta, but in truth Jack is failing Buck as badly as Gwen is—CoA is a congenital heart defect that narrows the aorta at its upper end, and Jack describes Buck’s condition as a tumor compressing the aorta at its other end in the pelvis. This little medical detail will matter little to most, but it does indicate sloppiness on the part of the writer—not really surprising, since we know this about Mr. Ross all too well from past books.

Of course it takes a big crisis in the end, when Gina trips and falls down the stairs, breaking her ankle and rupturing her spleen, to suddenly turn everyone’s affections in directions they had shown little inclination toward up until now, and Gwen tells Tom, “I’ve known all along that you couldn’t really part from Gina.” Curious that we readers were clued in to neither Tom’s feelings for Gina or Gwen’s near-psychic abilities. More curious is that after Tom tells Gwen that he loves Gina, he kisses Gwen on the lips, but “it lasted only a short moment,” so I guess that makes it all right.

Though he does better than usual, Mr. Ross cannot avoid his usual bag of writing tricks. He does enjoy descriptions of women’s bodies (though it’s not clear to me why he thinks his readers will) and here we get Gwen’s roommate wearing “a black-and-white polka dot housecoat over nothing much.” He also loves to pick out one woman in the book and refer to her constantly as “the dark girl”; here it’s Italian Gina who wins the dubious prize, though she only gets it five times. Poor nurse Molly Pearson, on the other hand, gets a new adjective, “buxom,” affixed to her name on seven different occasions. But I am nitpicking a little here, though, since these tics don’t ruin an otherwise decent book, and you can feel free to pick up Night Club Nurse with little of the usual aggravation that accompanies Dan Ross’s books.