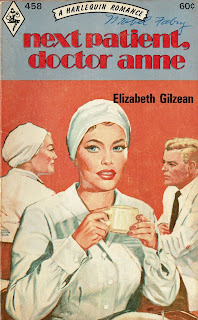 Anne had two ambitions—to qualify as a doctor and to marry Jonathan, the boy-next-door whom she had loved for years and who was himself going to be a doctor. Were the two wishes compatible, or would he decide that he didn't want a wife with a profession of her own? Or again, would he, going to the other extreme, be dazzled by the brilliance of Eva Clipston, who was the bright star of the Medical School and the daughter of a Professor of Surgery who could do a great deal of good to Jonathan's career? Jonathan was only one year ahead of Anne as a student, but that year seemed to have put a gulf between them and she was far from certain that she could bridge it.

BEST QUOTES:
“You are trying to gatecrash into a man’s world and even if you do make it, they will never let you forget that you are a courtesy visitor after all. You’re much too young to know that men resent brains in a woman. It frightens them to death.”

“Play at doing medicine if it makes you happy, but never forget you are a woman.”

“If a man can no longer punch the chap that annoys him, something has to happen to the end products of his primitive anger reaction. All that extra adrenaline that his anger triggered off to put that twitching fist into action has to go somewhere when the social code keeps the fist in his pocket. So modern man has gastric ulcers, hardening arteries, and probably coronary thrombosis, as a reward for keeping his temper.”

REVIEW:
Anne Greenslade is a bit of a curiosity in VNRN Land—when the curtain opens, she has just failed her exams to get into medical school. This means that her sort-of boyfriend, Jonathan Moore, is starting medical school without her. After a day or two of wallowing in self-pity, Anne rebounds, gets a job in medical records recording case histories, studies her buns off, and passes a year later.

So then she goes to medical school, facing some but honestly not a whole lot of prejudice from patients, professors, and fellow students. The years pass and we follow Anne through her triumphs and failures—not to mention all the times she runs into Jonathan in the halls, where he grabs her and makes cryptic comments like, “Anne, dear little Anne, if only …” before kissing her passionately and running away, leaving her “too shaken by his kiss and his pleading” to get back to work. Meanwhile, she hangs out with her best friend, Dr. Bill Donley, who—surprise!—professes that he’s in love with Anne during their fourth year, though “she had never dreamed that Bill cared.” We, on the other hand, could tell from the day they met! And frankly I was rooting for Bill, who, in addition to fitting the Casey Theory, spends a lot more time with Anne and is a kind, generous, warm man who takes her on picnics in the country when she’s looking particularly peaked. Jon, though he does help occasionally, and then often from the sidelines, is usually gallivanting off to London with fellow medical student Eva Clipston, the chief of surgery’s daughter and a cold, beautiful, diagnostic machine whom patients don’t care for because of her “hurting hands” and brusque manner. Anne’s jealousy peeks out on regular occasions, fortunately not enough to be irritating, and to make the story more interesting, the two women do work together regularly in a collegial fashion without clawing each other’s eyes out. They’re not best friends, of course, but are not bitter enemies, either.

Throughout the story, Anne’s training feels quite real: “she was to discover all too soon that a day was 24 hours long. Some people had the idea that a night was for sleeping, but Anne found out that this didn’t include house surgeons … She learned the art of being in three places at once, and the knack of putting first things first, and the importance of a smile whether it was on a ward round or at three o’clock in the morning.” She learns to do venous cutdowns to place an IV (!!!), she gets reamed out by nurses for her mistakes, she finally does her first appendectomy in her third year. She finds her own strengths in her attention to detail and her compassion, even as she sees her shortcomings in other areas; she develops into a sensitive clinician who cares about the patient’s social situation and their family, and is frequently called to glean important clues from family or friends, or to deliver bad news, or to buck up a patient’s flagging spirits. If the ending just sort of dwindles down to an expected and not especially climactic close, that’s a minor flaw in this sweet, gentle story, one certainly worth reading.
Posted by Susannah at 7:41 AM

Email ThisBlogThis!Share to TwitterShare to FacebookShare to Pinterest
Labels: surgery