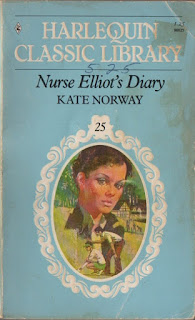 When Lucy Elliot started dating bright young architect Nigel Enderby, her father was thrilled. He was happily planning to take his daughter’s husband into his own firm. But Lucy didn’t love Nigel. She loved David Clifford, a doctor at the hospital where she was training to be a nurse. There was no sign at all, however, that David loved her. Should she marry Nigel for her father’s sake?

BEST QUOTES:
“I thought nurses spent all their spare time with their shoes off, groaning.”

REVIEW:
This book is somewhat unique in that it is actually written in the format of a diary, in the first person (which is rare enough as it is). The last book I read by Olive Norton, Paper Halo, was also written in the first person, and was fabulous to boot, scoring the top spot of Best Books at the last VNRN Awards gala. So I had high hopes for Nurse Elliot and her diary, and they mostly came off.

Lucy Elliot is a nurse in training, and she has the hots for Dr. David Clifford: “I wondered why the very sight of him turned my knees to water, even when he was obviously quite uninterested in me. It was all a matter of chemical reactions, I told myself. It had nothing to do with me or my emotions at all. It was purely a mechanical thing, and there was nothing I could do about it.” Of course, she has the usual blinders on about his feelings about her, since he will pull her into the linen closet and pat her hair, or even kiss her when she’s crying because “I had to stop you,” he explains. But nonetheless, she continues to insist that “Dr. Clifford thinks I’m just an incompetent fool.” I can’t really tell you why she thinks this, but maybe something happened early in the book when they were playing golf together—much to my irritation I found that my copy of the book is missing numerous pages right about then, so I can’t tell you who won the game or if any imbroglio ensued. If anyone out there could send me copies of pages 45 to 56, I would greatly appreciate it.

Anyway, while Lucy nurses her forlorn broken heart, she meets patient Nigel Enderby, who once he is sprung from the hospital insists that Lucy go out with him, and only later does it come out that he knows that her father is a prominent architect in the county—and since he is an up-and-coming architect himself, it would certainly benefit him to know the great man. Lucy is definitely only interested in a platonic relationship, up until her father suffers a heart attack. In her eagerness to not upset him—she’s already done so once and given him a second shock—she agrees to his suggestion that she marry Nigel. Suddenly Dr. Clifford is a lot colder than he had been, surely not because he cares about her, though. Did I mention at about this point she loses her diary at the house she and her father had sold, the house she was born in and loved more than anything, and which has been bought by … you’ll never guess … well, maybe you will … Dr. Clifford. You also won’t have to guess who read it; “I had to read some of it to find out whose it was, you see,” he explains on the last pages.

So everything is sorted out in the end, with some surprises from Nigel to make it slightly more interesting. (We know he’s going to turn out badly when (a) he’s announced their engagement in the newspaper without asking her, and (b) when she objects, he says, “You’re not going to turn into one of those awful bossy women, are you? A man does like a pliable wife, you know. I’ve not much time for backseat drivers, I’m afraid.”) But honestly, while it’s a very amusing book with a wonderful sense of humor and a fairly feisty, smart heroine (despite numerous misadventures as a student nurse), the story is not unusual or unpredictable. Norton is a great writer, with lovely bon mots on almost every page, but the plot here has been phoned in. A perfunctory book from Norton is better than almost anyone else’s best works, but there it is. It’s still absolutely worth a read, but still slightly disappointing when you know she can do  better.