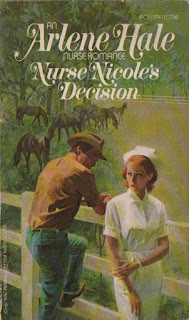 When Stella Bennett had a stroke, Nicole Scott, R.N., rushed to nurse her old friend back to health. So absorbed did Nicole become in her patient, that she began to forget her problems with Mark, her fiancé. But other complications arose in the person of two new men—the handsome nephew of her patient and the mysterious ranch manager, Lee Whitney. Suddenly all these various matters came to a head—and Nicole was forced to make the most important—and what turned out to be the most endearing—decision of her life.

BEST QUOTES:
“Nurses get sassier every day. Used to be they all but bowed down when a doctor came into the room. Ah, those good old days!”

“I take temperatures much better than I cook.”

REVIEW:
Nurse Nicole Scott, like many VNRN heroines, is engaged. You will not be shocked, therefore, when you deduce on the second page that this arrangement is not likely to come off as planned. Mark Foster runs a hardware store, “but right now every penny was going to pay off the mortgage he had taken in order to remodel and restock. Because of this, he didn’t feel marriage was in order. ‘My wife will not work,’ Mark said emphatically.” So when author Arlene Hale tells us two pages later, “All was not as rosy as it should have been,” we were already online with Bed, Bath and Beyond to cancel that wedding gift. Page after page of their incompatibilities—he loves baseball, she does not; he is shy, she is outgoing; he’s lazy, she likes activity—are trotted out to hammer home the obvious point. Nicole continues with the charade, however, because “if you’re not careful, you’ll end up like Lorena,” her helpful mother says, holding up Nicole’s quiet, baseball-loving homebody sister Lorena, who has reached the shocking age of 25 “and no beaus,” mom says, that ignorant silly, since everyone knows the plural of beau is beaux.

But fate intervenes when Stella Bennett has a stroke and requires round-the-clock nursing care in her home. Stella’s nephew Corbin Bennett III, an old school chum of Nicole’s, comes home to help care for his aunt. A profligate, drifting young man, he nonetheless is one of the few such young men who deeply cares for his rich dowager aunt, and spends hours each day talking to her, helping with her physical therapy, and making her laugh. And a fair amount of time trying to woo Nicole, who is unimpressed with Corbin’s flighty ways. Mark, too, is not happy to see Corbin again, but to such a degree that it’s clear there’s some dark history between the two, and Mark is remaining secretive on the subject. “Let’s just say I can’t stand him and let it go at that,” he snarls, and Corbin for once has nothing to add.

While Nicole is busy caring for Stella 24/7, she asks Lorena to keep Mark company, and then when she has a day off, she heads down the road to the ranch that’s owned by Stella but managed by hunky cowboy Lee Whitney, who also drops by daily to have pleasant chats with the invalid. And maybe the nurse, too. Before long, he’s gently kissing Nicole, and she’s returning the favor, having dinner with him at his house. “How comfortable she had been there. It was as if she need be no one but her true self. She had relaxed as she hadn’t relaxed in a long time. With Mark it was sometimes like walking a tightrope. What a pleasant change Lee had been!” Yet she’s still talking about her impending marriage to Mark. That young man is not helping; after talking on the phone with Nicole’s sister and realizing that “somehow with Lorena, he could be more himself than with anyone else,” he immediately decides to rush over and propose to Nicole. Along with his declaration of love—oh, wait, rather his declaration that “I decided I’ve had enough. I don’t see why we should wait. Let’s get married,” burbles the impetuous fool—he insists that if she wants the ring, she must quit working. “I will not have you working. I want you home. Where a wife should be. You should be willing to give this up for me!” Uh, okay, she stutters, and though she does bring up his own very long hours at the hardware store, before she can get to the point he literally shuts her down—“We won’t say anything more, okay?”—and that’s the end of that. (Lee, on the other hand, is outraged when Nicole tells him of Mark’s demand: “Nursing isn’t just a job,” Lee says. “It’s a profession, a necessity, something so essential—” because we didn’t have enough hints about who the right man really was.)

Before her engagement party, Nicole finds a book of poetry on Lorena’s desk, all full of sappy odes to Mark, and now she knows that Lorena is in love with Mark, which for some reason bothers her more than the fact that she’s kissing Lee behind every closed door. Because no one can have an honest conversation with anyone, it takes a fall down the stairs that puts Lorena in the hospital with the usual coma to bring everything out: Days later, when Lorena finally wakes to see Mark sitting beside her, she says, “Hello, Mark, darling. I love you,” and goes back to sleep. In their joy that Lorena is getting better, Nicole tells Mark that Lorena is in love with him, and that he is in love with Lorena. Well, gosh, now that you mention it, he says, and Nicole runs off to find Lee.

There’s not much to this story, just a straightforward telling of how when you throw a bunch of charged particles into a jar and shake it around a bit, eventually all the like molecules will find each other. But it’s not badly told, and gently glides along. Lee Whitney is definitely the most charismatic person in the book, a sexy, kind man who never grabs the woman and bruises her lips in an assault presented to us gullible maiden readers as a pass. Some parts of the story are maddening, like all the glaring highway signs screaming that Nicole is on the wrong road, which we realize on the second page, yet have to watch Nicole flounder for a hundred more pages until she starts to clue in. One odd side plot revolves around a woman named Elaine, whom Mark had been madly in love with before he knew Nicole, and whom Corbin had taken away from him. The two men even come to blows over it—Corbin knocks loser Mark down in two minutes flat—but neither man will discuss the reason for the fight with Nicole. Elaine’s name keeps coming up as both Mark and Nicole wonder if Mark will ever tell Nicole the story, but the last we hear of Elaine is Nicole’s resolution not to ask Mark any questions: “She would wait until Mark told her,” she decides. He never does. Interestingly, Lorena knows all about it, since, as the librarian, she knows all the town gossip, but she’s not going to enlighten Nicole, either. Is this supposed to be some metaphor for the deep understanding between Mark and Lorena’s souls that is missing in the relationship between Mark and Nicole? Because it only comes across as a major drama made out of a high school crush, and Mark’s persistent refusal to tell Nicole shows him up as an immature egocentric. It seems that poor Lorena is getting the worse end of the stick when she ends up with Mark, but at the dried-up age of 25, beggars can’t be choosers.