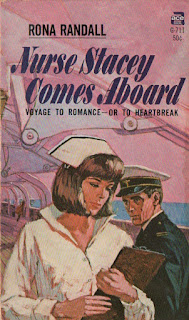 
Janet Stacey could not believe it when Peter Fuller broke their engagement. He told her that it would be unfair of him with so little income to ruin her chances for a “successful” marriage. Only a girl as much in love as Janet could have failed to read between the lines of such an excuse. As it was, she asked her uncle, owner of a shipping line, to employ her as assistant nurse on the luxury liner Regina, on which Peter was taking a business trip to New York. She thought that if she saw him every day she would be bound to win him back. In this innocent hope she reckoned not only without Peter himself, but without the ship’s doctor, Blane Hartley, who despised all girls in general, and Janet, the privileged niece of the shipowner, in particular.

BEST QUOTES:
“The best cure for sea-sickness is champagne.”

“No man who wanted to get on in the world could afford pride, these days. Not if he hoped to afford a wife, too.”

“When I was young I could spend a couple of hours choosing between only two frocks!”

“How one man could hope to stand up against two women Maude couldn’t imagine!”

“I’m off to get that dress material. We could cut it out on the surgery table this afternoon. How about it?”

“I’m always rude myself, and enjoy it, so of course I must excuse the fault in others!”

“Every woman is hurt, at some time or another. It’s better for them to experience it when young. They grow into better women because of it.”

REVIEW:
When we first meet Janet Stacey, she is being jilted by ne’er-do-well Peter Fuller, who says that he can’t marry her because he cannot support her in the lifestyle to which she has been accustomed. And also because her father had let his very considerable life insurance policy lapse, “most unfairly,” Peter grouses. Valiantly attempting to change his mind, she reminds him that she can get a job as a nurse. “Nursing for amusement is one thing,” he says, and so, right there on the third page, we’d like to close the door in Peter’s face. Unfortunately, Janet Stacey is not as smart as we are. “He was all she wanted in life and nothing would ever make her stop loving him,” and though we know she will be proven wrong in the end, unfortunately it’s going to be a long and somewhat excruciating journey.

Stacey’s rich Uncle Jim has a fondness for Janet and can see through Peter, realizing that he’s dumped Janet when “he’d learned that her father’s aura of wealth had been but a façade, that she was penniless, that she wasn’t such a catch as he believed when he met her.” So when Janet asks Uncle Jim to give her a job as a nurse on the same ship on which Peter is sailing to New York on business, with the aim of proving to him that she can too hold a job, he agrees to the scheme, thinking that Peter won’t be able to resist being the adventurer he is and that Janet will finally see his true colors.

Unfortunately, the doctor on board the ship, Dr. Blane Hartley, isn’t impressed with Janet at all, because he thinks she’s a rich girl playing at a job, and “a good-time girl out for what she can get.” During their first meeting, “they looked at one another, antagonism leaping between them like an invisible current. … It was open warfare between them,” and they’re snarling insults back and forth across the surgery. Naturally we know—so smart we are!—how that is going to turn out. Dr. Blane, it seems, “was trying to escape from some emotional problem, or a disappointment which went deep—or maybe only from himself.” So many mysteries! So many tropes!

After her verbal fisticuffs with Dr. Hartley, Janet sets about proving herself, and you will not be surprised to find that she is an excellent nurse, though the only job she ever really had was caring for her dying father. Along the way she takes the nasty rich Lady Elvira Travitt in hand, which turns out to be not too difficult because Lady Travitt, too, has a mushy center: “The first thing Janet noticed about her was the guarded expression of her eyes, as if she determined to allow no one a glimpse of her heart, and the second thing was the tightly maintained line of her mouth, as if she were afraid that if permitted to relax it would betray her. What would it do—droop pathetically? Reveal a sadness she was too proud to acknowledge?” Before long the old dragon has asked her to high tea in the first-class lounge and is plotting out her life.

There’s a beautiful young woman named Patsy Davis, whose luxurious wardrobe is described in such great detail that it isn’t long before we suspect something is amiss. Sure enough, Lady Travitt soon learns from a newspaper article that Patsy is a typist who won a beauty contest—”the only competitor actually holding the perfect measurements”—with a $2,500 prize, and now she’s blowing the wad on a round-trip ticket and one taste of the rich life. Her act quickly lures in playboy Peter, who is rushing her off her feet—and soon she’s in love with him, valiantly so, because she doesn’t believe she will ever see him again after the voyage is over, because she is no dope and can see Peter for exactly what he was—“the wrong man, of course. She knew that with the certainty and wisdom acquired in a tough school. Life had taught Patsy Davis to recognize people for what they were worth, for their character and integrity. But somewhere, somehow, Peter’s character had wavered; his sense of values had gone awry. But it didn’t make her love him any less.”

And of course it isn’t long before the hardened MD starts to bend. Though he is nothing but rude and insulting, Janet stands up to him and earns his respect: “She had sprit, at least, if nothing else. She stood up to him without insolence, answered without impertinence, and displayed a dignified sort of courage which he was forced to admire.” We learn that Blane had been engaged to Lady Travitt’s daughter Carol, who had dumped him for a “rich American—twenty years her senior and father of a grown-up family by the time she became his third, and youngest, wife,” because he was an “impresario” and had been impressed with the talent of the ambitious young woman. She’s “a star in her own right now, and didn’t need Wilmot any more,” and is getting a divorce—and she wants Blane back.

Lady Travitt turns out to be a bit Machiavellian, if not kind, when she tells Dr. Hartley that they should team up, keeping Patsy’s secret and “letting Janet find out for herself, slowly and surely, that the man she loves simply isn’t worth loving! That way, at least, her pride will be preserved. You’re not going to get the best work out of your nurse if her heart is broken.” Even more scheming is her recognition that Dr. Hartley is interested in Nurse Stacey. “She saw a lot—and she saw it clearly. To fall in love with someone else, to forget Carol completely, would be Blane’s salvation.”

So when he catches Janet sitting at his desk one evening—“she had wanted to touch his paper, sit in his chair, feel his pen between her fingers”—yes, just his pen – he swoops her up in an irresistible embrace. She tries to slap him, but he grabs her arm and pulls her toward him “until he pinioned her body close to him again. ‘You can’t escape, Nurse, so you can give up the struggle! Be still, you little fool, while I kiss you again.’” Though initially sobbing, naturally in the end she loves it, and “lay quietly in his arms,” until she tears herself loose and runs off to her room. Now there are pages of internal struggle—why, if she loves Peter, did she love being kissed by Bland? Why, if Bland hates her, did he kiss her?

The biggest problem with this book is that Janet is a complete dope. As she witnesses Peter’s first infatuation with Patsy, she nonetheless thinks, “Peter was absolutely trustworthy—she was sure of that. It didn’t matter to him that his fiancée was merely ship’s nurse, or that another girl was beautifully dressed and obviously moneyed, and that glance of his, which had seemed to observe every detail of Patsy’s appearance, had certainly held no hint of calculation.” Every letter of which is a lie. Even as she catches Peter and Patsy mooning at each other time and time again, she just thinks, “What if they were flirting a little? Her own affair with Peter was so different, elevated above all others. It was something much bigger.” Snap out of it, Janet! When the moment finally comes and Janet wonders, “just how stubbornly, and for how long, a girl could blind herself to the obvious,” we know the answer—125 dragging pages. And when Patsy unburdens herself to Janet, asking her if Peter will dump her when he finds out the truth about her, the scales fall from Janet’s eyes and she decides that she does not love Peter because she never saw him for who he really is. “She was disillusioned by his true character. She saw him as a different person, and one who no longer meant anything to her.” But guess who really is honorable, and who really does mean something to her!

The prose is fairly purple as well, with much hand-wringing and excruciating navel-gazing examinations of every possible angle of every interaction, offering moments when you have to reach for the Tums. But wrapped in all the lavender satin are some truly interesting characters, Lady Travitt and Patsy chiefly, and even Peter to some degree. It is surprisingly common that a writer will give all her skill to the supporting cast and leave the main characters flat and vapid. Janet is one such character, and Blane is just mercurial and moody, cut in the Heathcliff mold, without much real depth. So if there are some parts of this book that sparkle, they are sadly just not enough to make this book really worthwhile.