The Nurse from Hawaii 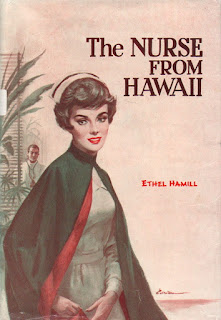 Gail Ingersoll, born and raised in Hawaii, had longed for months to return to the beauty and warmth of the Islands. But a sense of duty had kept her in Vermont, where she had gone to nurse old Miss Abigail Ingersoll, the last of the family on the Mainland. Now Miss Abigail was dead, and as soon as Gail had recuperated from a recent bout with pneumonia, she could begin making plans to go home. Vermont was covered with snow the day Dean Mathias and the small child in a red snowsuit came to seek shelter in the old carriage house—not even asking permission, if you please. Dean Mathias, with his sultry good looks, his pantherlike grace, could leave at any time, Gail decided, but it would break her heart if he took the small blonde Clancy away with him. There was some mystery about the pair, Gail was sure—something that had brought them from California to Vermont. Until that mystery was cleared up, and Clancy was quite safe—Dean was threatening to leave and take Clancy with him—Hawaii must wait. Only by giving up her dream could Gail realize her full potentialities as a nurse and find a love—or rather, two loves—that would make her renunciation an easy choice.

BEST QUOTES:
“The expensive, ugly wallpaper showed lighter rectangles where other pictures had hung; past Ingersolls had bought themselves the best, but with no eye for beauty. And now, indestructible, their mistakes survived them.”

REVIEW:
It was with great pleasure that I realized that Jean Francis Webb, one of my favorite VNRN authors, had written a nurse novel that I hadn’t read yet. This is the youngest of the six, written three years after the delightful Aloha Nurse, and it almost seems like it might have been the child of a second mother, as it has none of the camp or wit of its older sisters. But it is a smooth, gentle story that feels written, with a small (if not altogether obvious) mystery at the end, and worth reading, if for different reasons.

Gail Ingersoll was born and raised in Hawaii, but for unclear reasons came to New York to work as a nurse. There she met Old Dr. Hawkstrom, who hails from the tiny town of Cutler, Vermont. She happened to have the same name as an elderly, wealthy woman desperately in need of a nurse, and as fate would have it, the two are second cousins twice removed, and this familial bond (though Gail had not been aware of the existence of old Abigail) compelled her to move to Cutler and nurse the old bat for four years, through what sounds like Alzheimer’s, until the woman had run out into the winter night and drowned herself in the pond. Gail has inherited the entire fairly large estate, and is casting about for something to do with it—she’s considering starting a hospital in town—when a tanned Californian surfer with “almost a dangerous face” is discovered in the carriage house with an ill five-year-old child named Clancy.

Gail immediately takes over the little girl, moving her into the house and falling unreasonably in love: “She hadn’t known a day ago that Clancy existed. Today, the tiny creature on the sofa bed seemed the most important person in the world.” She has Old Doc out to inject some penicillin, and the doctor seems strangely taken by the little girl, as well. It’s not too hard for us to see the writing on the wall: Dr. Hawkstrom’s daughter Beth had run away to California and hadn’t been heard of since. The little girl calls the man by his first name, but everyone assumes he is her father. He’s a cool, suave snake, and Gail warily puts up with him because she wants to keep Clancy—and of course the girl shouldn’t be moved for weeks after this little cold that she’s suffered.

Eventually Gail proposes to give Dean a stipend that would allow him to spend his life surfing in Hawaii if he will let her adopt Clancy. He comes back with a counter-proposal: That she come with him and Clancy to Hawaii, and, he tells her, “I’m perfectly willing to marry you first,” sealing the offer with a “hard and virile and questing” kiss. Another catch is that she can only have Clancy if she keeps her inheritance—but mercifully, she does not consider this for a moment.

Then Old Doc’s son, Dr. Jon Hawkstrom Jr., arrives in town, and Gail finds the air a bit thin and electric when he’s around. She’s sure he’s going to help her with her plan to convert the old mansion into a cottage hospital, but he insists he has some research projects he can’t abandon, and off he goes. Then Dean is on the brink of pulling out with Clancy, and stops to say goodbye to Gail—just as Doc Junior returns to town, and a lively conversation ensues in which all is revealed!

If the plot, in the retelling, seems a little dull, the story is assuredly not. The depiction of this snow-bound Vermont village evokes the Lucy Agnes Hancock books of the 1940s, calm and sweet; the tone is even, dare I say, a little Robert Frosted. Lovely sentences abound: “Spring seemed to be stirring in its sleep, under white blankets.” And: “I’d hate to see you crack your heart on the impossible.” Peripheral characters are well-drawn and charming, and there’s a compelling if tiny story of a woman who the town thinks has run off with the owner of the feed store. Gail is shown on several occasions to be a smart, competent, dedicated nurse with no idea of quitting her job, even when she’s a wealthy woman: “I’m a nurse and I always will be,” she insists. Completely devoid of the delicious camp of his past books, in this book Mr. Webb has instead created a lovely, simple story that, if of a different style than his earlier efforts, still demonstrates that he was a gifted writer. And one whose works I have now, sadly, exhausted.