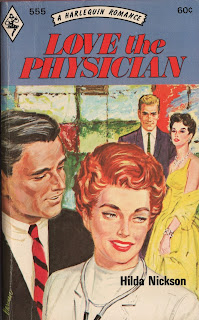 Doctor Laura Travers had always mothered and taken charge of her young sister, and when an unfortunate episode threatened to ruin Jacquel’ne's life she was only too willing to give up her job in London and help her sister to make a fresh start. So they retreated to a remote Norfolk village, where things at last seemed to be soring themselves out—but would they ever be able to escape from the past forever?

BEST QUOTES:
“A raging torrent is always more interesting than a frozen lake.”

REVIEW:
Dr. Laura Travers has raised her younger sister Jacqueline since Laura was 16 and their parents were killed in a car crash. Through sheer grit and determination, despite having no money, Laura was able to put herself through medical school while supporting Jackie. Whether she always was or was forced to be, though, Laura is now “cool, self-sufficient and rather domineering … apt to take charge of people and situations.” She’s taking charge again now—because Jackie had gotten herself mixed up with a con man, Dennis Logan, who had used Jackie as a decoy in his swindling schemes, and Jackie had only barely been found innocent at the trial that had sent Dennis to jail. To escape the publicity, Laura quits her job in London and applies for a position in a small village in Norfolk.

At the interview, Laura is bafflingly outraged to discover that Dr. Adam Strickland, her would-be partner, is a young man. She’s overtly rude to Adam when she thinks he is an imposter, and barely less so when she discovers the truth; she speaks “coolly” three times during their four-page interview. She condescends to accept the job, though “their relationship might well be stormy.” And that’s putting it mildly! She is usually rude or seething when they speak, all the while convinced that Adam is falling for Jackie, and she works assiduously to promote the relationship. Nonetheless, he’s already kissing Laura and pulling the pins from her hair in chapter three. It’s the patented love-hate relationship in classic proportions.

Contrast the angry Laura with Adam, a flimsy sort who campaigns for a seat on the town council by delivering stand-up comedy routines instead of speeches; “life to him is one long joke,” she thinks. He’s relentlessly pursued by town rich girl Pauline Brimsden, whose father is the business leader in town and the council representative responsible for squashing plans to install a town sewage system. Adam drifts along with Pauline, and when rumors run through town that he is engaged to her, he makes no attempt to correct the story even to Laura when she refers to Pauline as his fiancée.

Then Laura, encountering numerous sore throats and stomach aches in town that she chalks up to poor sanitation, decides to crusade for a public sewage plant and starts to make headway among other town councilors. When Adam finds out about Laura’s campaign, he loses his cool, bizarrely furious that she hasn’t consulted with him before starting her efforts. “Of all the bossy, domineering females I’ve ever come across!” he shouts, apparently forgetting that Laura had tried to discuss it with him, but he’d been playing with a wind-up toy clown during their entire conversation and had told her she should not expect him to get “hot under the collar” about the situation because “I’ve been brought up with it,” before dropping the conversation altogether to answer a telephone call from Pauline. When Laura curiously decides to apologize, Adam is won over: “Was this the real Laura Travers? This soft-voiced woman with the humble, contrite expression?” Why must her “real” personality be the meek one, and why is this so much more attractive?

There’s another man in town, Alec, who hangs around the Travers sisters as well, and Laura tries to convince herself that she should marry him, almost as hard as she works to push Jackie and Adam together. The writing on the wall is so staggeringly large, however, that Laura’s incessant worries and maneuverings quickly become tiresome and hypocritical—one minute she’s happy Jackie is holding Adam’s hand, and the next she’s furiously convinced that Adam is just playing games with Jackie and is going to break her heart—and all the while “she could not understand the ache in her throat and in her heart.”

Eventually Dennis escapes from jail and turns up in town with a gun and a letter written by Jackie that makes it sound like she was involved in his schemes, so the sisters are essentially being held hostage. How will all this sort out? If you guessed, as I did, that somewhere along the line there would be a car crash, you’d be right!

The problem with a character like Laura Travers is that we are supposed to disapprove of her assertive nature. We’re told she’s a “fiery-tempered shrew” who likes “to boss you and organize you and generally run your life. It won’t be long before Dr. Travers tries to run the village.” “Bossy” is a pejorative never used to describe a man—men are just exercising their natural leadership skills. But it’s peculiar here that Adam doesn’t really seem to have any, and just drifts along—even in his moment of triumph, when he’s re-elected to the town council, it’s shy Mr. Baxter who requests a committee to look into a sewage system; Adam only “reluctantly” seconds the motion, he states in his big speech, saying that he’s promised a rich man on the town council not to bring it up, “And so, even if the whole of Westhorpe dies of typhoid fever, I have my promise to keep. I will drop the subject and leave it to those of you whose consciences have recently been stirred, very appropriately, by a woman, new to this village. Gentlemen, the matter is entirely in your hands.” Somehow this makes him a hero of the town.

Ironically, in the end, it is even suggested that soon Laura will be elected to the town council. Is she a success for having put the sewage system across? Is she unlikeable for her assertive character? Sadly, I think the truth of the story is that even now, sixty years after this book was written, strong women are both—successful and accomplished, perhaps, but also struggling with the stereotypes that cause others to disapprove of the very qualities that bring them success. If Laura had been more like Adam, a go-along-get-along kind of person, she and her sister would have been wards of the state, Laura would never have been a doctor, and the town of Westhorpe would still be pooping in their drinking water. But Laura would have been so much more admirable and charismatic!

In the end, if you can tolerate Laura’s steamrolling endeavors in her personal life and her sister’s, ignore the bigotry she generates in others when she campaigns for a better town, and overlook the success Adam paradoxically achieves when he literally refuses to try, you might find this book more enjoyable than I did.