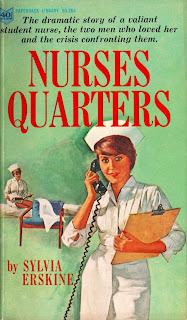 As far back as she could remember, Ann Harrelson dreamed of becoming a nurse. Nothing mattered but her training—until she met the handsome, charming—but married doctor. The lovely young student nurse was no match for his mature sophistication. As new and uncontrollable emotions overpowered her, Ann knew she would sacrifice her career, her dream, and her reputation. Then she met Dr. Allan Hall, who offered her the chance to start anew. Ann was faced with a decision that would alter the course of her life. But it was a hospital emergency and emotions laid bare by the crisis that showed her the way.

“‘From him, a dressing down wouldn’t be hard to take,’ murmured Norah dreamily. ‘In fact—’”

“You’re a nurse, honey. You’re supposed to concentrate on skill and not your hellish beauty.”

“Look here, I’ve had about all of that ‘you’re a doctor’ stuff I’m going to take form you or anyone else.”

REVIEW:
I think this book qualifies as smut novel! I’ve never read one before, but this pseudonym was one used for only four books by Peggy Gaddis; the others, including A Lover for Anne and Farm Hussy (which I for one am going to race out and buy!), do seem to fit the bill. But it must be confessed—though our heroine, Nurse Anne Harrelson, does in fact have sex on multiple occasions with the married Dr. Prescott Thayer, all is carried out offstage, and we’re given only vague sensual language to describe the shocking situation. It is, in fact, far tamer than almost any contemporary romance novel.

Anne is living at home with her sister and her sister’s husband Bruce, and she and her brother-in-law are lusting mightily after each other, even kissing behind closed doors. But fortunately, she has always wanted to be a nurse and had applied to nursing school, so even though her sister tells her, “you’re a born homemaker, and I think you’re making a mistake to insist on the nursing school. You should be married, Anne. You should have a home of your own and at least one pair of twins,” as though obtaining a husband and twins were merely a matter of shopping the right department store. There is a young man who would like to offer Anne a ring, and fresh off a hot argument with Bruce, Anne is ready to have sex with the guy right there on the beach, but Jim fends the hot-blooded woman off long enough for her to remember that she doesn’t really love him.

So off to nursing school she goes, grumpy and uncomfortable in her starched, nylon uniform until Dr. Thayer offers her a ride home by way of his apartment, feeds her too many drinks, and then bends her over his arm. “You know what you need, don’t you?” he purrs, and she does! “I wouldn’t be much good in my profession if I couldn’t diagnose a simple case of emotional frustration,” he concludes, and three paragraphs later it’s over, “her body relaxed as she had never before been relaxed.”

Then it’s back to the grind of classes, Anne a far more mellow woman, able to enjoy the company of Dr. Allan Hall, who is finishing up the final year of his residency before heading home to take over his father’s practice in a small Georgia town. But eventually she starts getting wound up again, and Dr. Thayer recommends a weekend away in a small town.

Unfortunately, the morning after a passionate night in the motel, a tornado sweeps through a nearby town. Given away by the caduceus on his license plate, Dr. Thayer instead flees for St. Simons when the hotel owner begs the couple to aid the tornado victims, but Anne, just months into her training, stays and works tirelessly to aid the victims—and when more aid finally floods in and she’s free to drop, a newspaper reporter takes a photo of her asleep on a table, and her illicit weekend away is exposed. She’s kicked out of nursing school, but finds a job in a nursing home for indigent elderly, quickly becoming the bestest nursing aide the place ever knew.

Then Mrs. Thayer, in a smart tailored suit and a navy blue lamb’s wool coat, tracks her down and orders her to leave town or she’ll have the home shut down. Anne is packing her bags again when Allan turns up, pissed as hell that she’d run out on him and declaring that he’s in love with her, that she should move to the town where his father works, help out, and marry him when he’s finished with his residency in a few months.

The interesting thing about this book is that Anne’s adventures in the sack are a great burden to her conscience. She is constantly declaring that she is “a no good, shameless bitch!” and “sickened with shame and self-disgust.” It frankly gets a little old to constantly be told that “surely no decent, self-respecting girl would be so stirred by this evil thing, this aching yearning for physical lovemaking.” The men usually don’t agree, including the man she didn’t boink on the beach, who tells her, “What’s so shameless about giving in to the way you feel about a fellow?” Though he does add that they should be married first, and her qualm seems to stem from the fact that she is not in love with the men she wants to shag.

But Anne does demonstrate strength of character, enough to go back to nursing school when she knows she’s been found out to face the consequences. “This had to be faced before it could ever be put behind her,” she thinks, even as she realizes the career she had wanted so badly will be destroyed. And when the man she decides she really does love shows up to claim her, she does her best to talk him out of it, telling him the entire truth from beginning to end and declaring that she’s “a no-good tramp of a girl no decent man could want around.” Her would-be, of course, continues to declare his love for her—though he admits “I’d give my right arm if it hadn’t happened”—and reminds her that “you’ve had the honest and the decency to confess it and to regret it.” And the doctor in the town she flees to after this confrontation takes the whole story with a shrug. “Were you trying to shock me, child? I’m afraid you’re years too late for that,” he laughs, adding that “the only wrong thing now would be to go on letting it ruin your life. You’ve got a lot of years ahead, and you can make them very find, full of happiness, of services, or you can get yourself all twisted and bitter and warped by useless remorse.” Only a kiss the likes of which she’d never felt before with her beloved cleanses her pure in the end, even if he announces, “it wouldn’t be human to forget that the woman you love has had another man’s lovemaking thrill her.” If it’s still a stain on her character that she’s not a virgin—and we know it would never be a stain on a man’s—at least she wasn’t in love with them! Or if she was, as she said she was with her brother-in-law, she never did sleep with him. Phew! So if this is the ’60s version of a smut novel, it's a little disappointing—more for its relentless morality than for its immorality.

Email ThisBlogThis!Share to TwitterShare to FacebookShare to Pinterest
Labels: affair, theme - running away