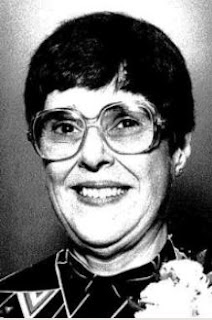 Isabel Capeto (1925-2018) was born in Fall River, Massachusetts, in 1925, the youngest of seven of ten surviving children. Her parents had emigrated to the United States from the Azores, Portugal, around 1904 and married in 1908. Her father owned and operated a printing company most of his life, where some of his sons worked as well. Isabel attended Providence College, a Catholic university in Providence, RI. She then went on to St. Anne’s School of Nursing, which was associated with St. Anne’s Hospital in Fall River. She was a member of the US Cadet Nursing Corps during World War II at age 19, likely as she was starting nursing school.

She never married and lived in Fall River her entire life, most of it in the same house she grew up in, at 66 Turner Street. Into her 30s she was sharing the home with two brothers and two sisters. Her sister Beatrice was the first in the family to become interested in writing, and had bought books about how to write fiction, which Isabel picked up: Writing “is a bug you can’t get rid of, once you’ve picked up,” she said. Her first book was A Few Drops of Murder, a mystery novel set in a hospital, which was published in 1955 when she was 30. Most of her books were published under the pseudonym Isabel Cabot. Her sister Alice was responsible for proofreading Isabel’s admittedly poor spelling.  She was writing two books a year, each one taking about three months to complete. She would write most evenings after working at the hospital; she worked at St. Anne’s Hospital in Fall River as a nurse and also held several administrative positions there, training nurses and serving as assistant hospital administrator.

Her obituary states that she was the author of “several” romance novels; in truth she wrote about 25 books in total. She outlived all her siblings and died at age 93 in Fall River in December 2018. She is buried at St. Patrick’s Cemetery there. 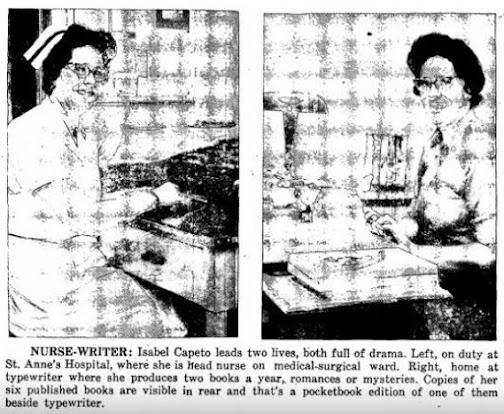