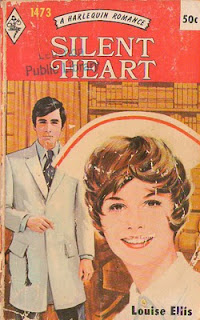 Young Nurse Sara Danley was too kind-hearted for her own good—and was it worth it, when all her good nature seemed to be doing for her was losing her one boy-friend after another?

BEST QUOTE:
“They’re off to a factory this afternoon to see how hygienically Stackers’ Sticky Star-Dreams are made. I should think she’ll never be able to look a boiled sweet in the face again after she comes back.”

REVIEW:
Silent Heart is a slightly problematic book, essentially because it’s British. The writing is good enough, and the characters are interesting and say snappy things like, “Shut up, infant,” and, “He’s just a crusty old bachelor who pretends he’s got brains. Half the girls say he’d be a bit of all right, though, if someone really smashing got hold of him and tempted him a bit!” While the British aspect means the characters use a lot of cute English slang (including the unfortunate “keep your pecker up”), most of which can be figured out from its context, the main problem is that British hospitals use completely different titles—ward sister, casualty officer, RMO, PTS, SRN, matron, staff nurse (see glossary below). This makes it pretty slow going at first until you get the general gist of who outranks whom.

Sarah Darley is a first-year student at a nursing school (though confusingly there is a year below her, PTS), and engaged to casualty officer and Dr. Michael Armstrong. In the opening scene, though, he slings his arm around her cousin, beautiful full-fledged nurse Thelma Cross, “and forgot to take it away,” which spells the end of that relationship. While crying in the tropical fish section of a department store, the R.M.O. (regional medical officer, the most important resident doctor at the hospital), Dr. Andrew Haynes, runs into her and offers her his handkerchief and to buy her coffee. “They told me on my first day that he didn’t speak to anyone except staff nurses upwards unless one larked about in his lectures,” Sarah’s friend Karen remarks when she hears about the incident.

Sarah also encounters a Dr. Luke Sadler, who pops up at convenient times to give her a lift in his car. During one of these encounters, Dr. Sadler tells Sarah about “your dear R.M.O. He was responsible for a girl’s death.” Then one of the nursing students steals a clipping from the newspaper archives that explains that he and a woman doctor were out on accident duty and she died accidentally. The gossip is that Dr. Haynes could have rescued her but didn’t, and that she had been engaged to him but he had jilted her. This of course changes Sarah’s opinion of Dr. Haynes, though she “enjoyed a shattering ecstasy that scared her a little” when she cries on his shoulder, which seems to happen with frightening regularity.

Sarah’s relationship with Dr. Haynes is not my idea of a good one. Because of their relative positions in the hospital, she calls him sir. She is “young enough to be—well, if not his daughter, at least a great deal his junior.” He does tend to treat her like a schoolgirl, “with a clean handkerchief mopped her face quite efficiently” when she is upset that a hospital staff member has a heart attack in front of her. He himself runs the gamut from kindly patronizing to bossy and domineering: “He swerved the wheel a little and that made him angry. He was a good driver, and he hated the mere thought of having his paintwork scratched or a man in a lesser car tooting at him, as was happening now.”

Outside of her crush, Sarah gets into quite a few scrapes, which all seem to lead, too conveniently, to her being rescued or caught by Dr. Haynes. One evening Sarah breaks into someone’s house to recover a purse that has been left there by another nursing student, who has snuck in with her boyfriend for “a bit of kissing” when the occupants were out. Another time she is supposed to be waiting for Dr. Haynes to pick her up, but a brick wall falls over and she leaps into the street to save a passerby from being crushed. Her former fiancé, Dr. Armstrong, happens to be in the first car that comes along, and embraces her (which Dr. Haynes sees) before taking her and the accident victim back to the hospital. As if these escapades aren’t enough, or improbable enough, on another day she is riding in an ambulance down a road that is experiencing landslides, and Dr. Haynes takes off after her in his car to attempt to save her and gets into a car accident himself. This book is one forced adventure after another.

It’s not unenjoyable, as some of the adventures and dialogue of Sarah and her friends are amusing. But it’s more work to get through this book than an American vintage nurse romance novel. I don’t read these books for the challenge, and this one doesn’t really make the effort worthwhile enough.

GLOSSARY
almoner - somebody affiliated with a hospital as a social worker for its patients
boiled sweet - a hard candy, made by boiling sugar, that slowly dissolves when sucked
candy floss - cotton candy
casualty - emergency department
clot - idiot, fool
give over - stop it
GP - general practitioner
home sister - hospital staff member who looks after the nurse probationers
ice cream cornet - ice cream cone
jiggins - head, brain
landslip - landslide
matron - a nurse who is in charge of the other nurses in a hospital
mug up - to study hard, especially in preparation for an exam
in digs - live in a room in someone else’s house and pay rent
keep your pecker up - keep your spirits up
pitch into - attack, tear into
PTS - preliminary training school, undertaken before nursing school
RMO - regional medical officer, the most important resident doctor at the hospital
SRN - staff nurse
staff nurse - a British hospital nurse whose rank is just below a sister
swot - to study very hard, especially for an exam; an unduly industrious student; a period of time spent studying hard, especially for an exam
tear a strip off someone - to chew someone out
tiddler - child
traffic warden - a civilian employed to assist in regulating the flow of traffic
ward sister - a woman who is a ward manager in a hospital
Posted by Susannah at 11:04 AM