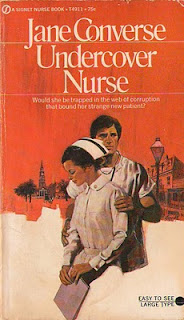 Nurse Gail Arnold was young and beautiful and happy. Her work at the Narcotics Rehabilitation Center was interesting and rewarding. And her silent worship of handsome Dr. Bruce Cranston filled her heart with hopeful dreams. But her serene existence was in for a startling change. An unknown young woman, viciously beaten and near death from an overdose of heroin, was brought to the hospital. Gail, assigned to the case, now found herself working in heart-quickening closeness with the man she loved. Then menace marred the picture. For the new patient harbored a tormenting secret that was to spell deadly danger for Gail. It would lead her, innocent and unsuspecting, into the nightmare world of narcotics traffic where not only her dreams of love but also her very life would be threatened!

BEST QUOTE:
“It’s hard to kiss you when you’re moving your lips.”

REVIEW:
Just because a book is fluff doesn’t mean it has to be a complete waste of time. If the author cared about it, thought about it, and worked on it, it can be an interesting, amusing story. This, alas, is not what happened with Undercover Nurse. This book feels tossed off and mechanical, and even the great writing of some earlier Jane Converse novels (e.g. Surf Safari Nurse, Backstage Nurse) is totally lacking. You can zip through it with less pain than with some VNRNs, but that’s hardly a worthwhile motive to pick up this or any other book.

Gail Arnold works at the Bayou Narcotics Rehabilitation Clinic in New Orleans with Dr. Bruce Cranston, who she has loved from afar for quite some time. The fact that they work with drug addicts gives the book a rare flash of originality, though the constant lectures about how misunderstood drug addicts are is a serious, well, downer. Bruce and Gail get a case one night, just as Bruce has asked Gail out to dinner at Antoine’s, which totally wrecks those plans. Stella De Shiel is overdosing on heroin and has been beaten to within an inch of her life. The pair brings her back from the brink of death (curiously, they give her Dilaudid, a derivative of morphine, to help her kick her narcotics habit), and she starts spinning wild, hysterical tales about how the clinic’s main benefactor, Paul Mascon, is actually running a narcotics ring and is trying to kill her because she worked for a competing syndicate. Yeah, right, thinks our heroine.

A “friend of the family” drops in to see Stella, and doesn’t seem overly upset that she is not having visitors. He starts chatting up Gail, and in about three minutes flat she lets drop that they suspect foul play with Stella’s injuries, Stella has named Paul Mascon as the ringleader of a drug syndicate, the police have not yet been notified, and Stella was moved to a new room—that would be Room 109—last night. Would you be surprised if I were to tell you that Stella turns up dead a few days later, murdered with a heroin overdose?

That night two “policemen” show up in Gail’s apartment and drive her out to some house in the bayou to meet the “chief”—and would it shock you to learn that the “chief” is really Paul Mascon himself, and that he orders the two thugs—they’re not really policemen after all!—to kill Gail? Honestly, Gail is dumber than two sticks. “This couldn’t be happening! They were going to kill her! In a few minutes she would be dead, and there was nothing she could say, nothing she could do to save herself!” (And the italics are the author’s, I’m sorry to say.) Well, it turns out she can save herself, but that can’t come as much as a surprise, either.

Maybe drug clinics were new and interesting in 1972, and maybe reading about heroin addiction was really exciting in those days. But even if that’s the case, I don’t think that could make this a better book. It takes more than some slang expressions (“shooting junk,” “joy-popping,” “bummer LSD trip”) and a couple of patients having seizures to make for a good read. The “easy to see large type” doesn’t really help matters, making the book seem even more juvenile. It’s not painful, but that’s really the best I can say for this book.
Posted by Susannah at 8:11 AM