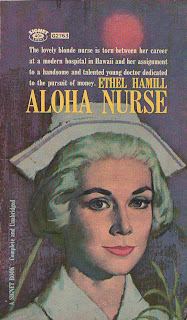 The nurse is a captivating blonde whose profession means everything to her. Now it is all she has—her fiancé has just married another girl. The doctor is young, handsome, and eager—for money. He is a talented surgeon, a skilled practitioner. But he is willing to throw up his medical career to become a singer. They meet in an explosive romance played against the background of Hawaii’s superscientific Aloha Hospital and the plush, glamorous night clubs of Waikiki Beach.

BEST QUOTES:
“Jewel was so ladylike she wasn’t possible.”

“Why, I haven’t been managed by a woman since one fed me strained vegetables and changed my three-cornered pants!”

“I’m not really a bad guy. I earn my own living—one way or the other. I’m kind to animals. I help old ladies through the traffic in downtown Honolulu.”

“You, the nurse, there’s more starch in your face than in your uniform.”

“If he had been a woman, love might have been enough to make up the difference. But for men, it simply wasn’t. It never had been; it never would be. Men needed more than love.”

REVIEW:
Cosima Arnold is a nurse at the “ultra-scientific” Aloha Hospital in Honolulu. This hospital is so cutting edge that, fifty years later, most of its technologies have yet to be put into practice in the real world. But in addition to her nursing job, she has been assigned by the millionaire benefactor of the hospital to serve as the assistant to a New York public relations wiz, Timothy Nairn, moved into the hospital temporarily at the behest of the same millionaire, to promote the career of Dr. Perry Hilton. Dr. Hilton is chucking medicine to become a lounge singer, and the millionaire wants to promote his career because he thinks this will soften the locals to his presence on the island and get his wife invited to parties. I guess that’s a little convoluted, as is Cosima’s service to Timothy—why couldn’t they just hire him a secretary?

But ours is not to question the whims of millionaires. As part of her duty to Timothy, she is sucked into his scheme to have Perry managed by a group of beautiful blonde women—it will get them more publicity—which is fine with Dr. Hilton, who has a bit of a crush on Cosima. But Coz’s heart is turned to stone, because Dale Banning, a textile executive whom she met “a few months ago” and who left “a few short weeks ago” on a business trip to London, married Pegeen O’Hara in London and let her find out by reading a squib in the London newspapers. She is never going to fall in love again! Well, we’ll just see about that, missy.

One of the other bimbos on Perry’s “Board of Blondes,” Margot Ambrose, is jonesing for a Hollywood career, and bad. She thinks she can hook herself to Perry’s wagon and turn herself into a movie star. Cosima, quickly catching on to Margot’s plan, does her best to rescue Perry from Margot’s clutches by kissing him smack on the lips in front of all the photographers after his triumphant debut at the Hibiscus Room. It apparently curls her toes something fierce, but this does not mean that she is in love with Perry! “Couldn’t they believe the simple truth?” she asks herself, the self-deluded little fool.

Meanwhile, Margot is scheming like mad. She calls Tim and tells him that if Cosima doesn’t stay away from Perry, she will tell the press that the Board of Blondes is a cheap trick to win over the locals, causing them to turn against Dr. Hilton. Then Dale turns up on Cosima’s doorstep, telling her that he only married Pegeen to put his textiles deal across and plans to take up with her where he left off. Cosima gives him the heave-ho—but he turns up later, drunk, and assaults Cosima. Not to worry, Perry arrives in the nick of time to knock out Dale, but he’s got Margot in tow, who has manipulated her way into a date with him. After Cosima, in an attempt to comply with Margot’s demand, insists that Perry leave so she can revive Dale, Margot drops a dime to both Pegeen and a photographer from a local gossip rag, who catches the tender reunion of wronged wife, straying husband, and framed nurse on film and drops it into the next edition. This only gives Margot more ammunition to use against Cosima, which she plays to further advantage. When Cosima learns that Margot is going to blackmail Perry into taking her to Hollywood with him—he’s just landed a movie contract of his own—she realizes—gosh!—“I’m in love with Perry!”—how in the world will she save him from the evil Margot?

The futuristic medicine of the is pretty far out: meals are prepared electronically and pop out of a slot in the wall, surgery happens in the patient’s own room under a hermetically sealed tent, and one nurse manages an entire ward of 24 patients by television and electronically recorded vital signs. Sure, most of that is totally off base and displays a bit of ignorance on Ethel Hamill’s part on the details of how medicine is actually practiced. But it shows that the author put some thought and care into this book—and besides, it does predict the linking of computers by telephone.

It’s not just its utopian tinges that make this book a cut well above the usual VNRN. The writing is more sophisticated, which becomes apparent with the first two sentences: “Awakening to a sudden, vivacious life of its own, the tiny light above the reception desk at dead center of Unit Three, Aloha Hospital, began to wink at her. It winked with the vigor of an eye attempting to rid itself of grit.” We are regularly hit with vocabulary words like pulchritude and sequent, and the book assumes a level of sophistication in the reader, as when we are told that the millionaire sold, among other properties, “his town house on Russian Hill”—we are supposed to know that Russian Hill is in San Francisco. (Which I did, so I was flattered.) The plot twists are almost Machiavellian, and it’s sometimes a bit of an effort to keep up. But this I can forgive, because at least the author has put some thought into this story, and besides, there’s a little surprise at the end that finally squelches Margot. This book is a little gem, and I look forward to reading more of Ms. Hamill’s work.
Posted by Susannah at 6:33 PM