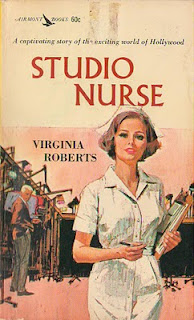 Being studio nurse meant for golden-haired Lori Todd sharing all the excitement of Hollywood picture-making, as well as taking care of Producer Mike Lancaster’s ulcer. Mike’s worry was the picture that would never be finished… Lori had two worries. Handsome Mace Hunter, test pilot for Pacific Aircraft, who persisted in risking his life daily for the sheer adventure of it… and naval Lieutenant Dirk Patou. The future Dirk offered Lori was both stable and secure, and in his white uniform Dirk was every bit as handsome as the test pilot who simply would not listen to reason…

BEST QUOTES:
“ ‘Bill Cox has an iron hand,’ she reminded him. ‘He’ll spank her if she doesn’t follow orders.’ ”

“Sleeping keeps me from drinking coffee.”

“ ‘What he needs,’ Lori theorized, ‘is a good wife to take care of him and boss him around.’ ”

“I didn’t know you’d look so fragile and blonde in your uniform.”

“Hildegarde, maybe if you’d have gone to charm school, like I suggested, you’d have a job somewhere else by now.”

REVIEW:
Lori Todd lives in a rooming house off Sunset Boulevard in Hollywood with four other people, plus the landlord and the “colored” cook. She’s a nurse at Richlieu Pictures in Culver City, where she ministers to extras and tries to encourage the spoiled leading lady, Wendy Wilks, to show up on time and put a little effort into her acting. It’s not working. Wendy is the daughter of the millionaire who is bankrolling the film, and if she feels like taking three days off to go party in Las Vegas, well, that’s what she’s going to do.

But truthfully, Lori is about as detrimental to the film as the apathetic starlet. Right off the bat, in Chapter 2, she brings her landlady’s dog to work with her because, “being a city dog, he doesn’t get the exercise he needs.” In the middle of shooting a scene involving a large number of extras and a horse, the dog, which Lori has not even put on a leash, runs onto the set and spooks the horse, which plunges through the crowd, injuring five people. A woman loses a front tooth, another sustains a concussion, and one man has two broken vertebrae and has to remain in the hospital for “an indefinite number of weeks.” Lori gives not one moment’s thought to her role in this tragedy, instead concentrating on the superstition that “accidents always came in threes.”

And she doesn’t waste much time bringing on the next catastrophe. She’s concerned that director Mike Lancaster is developing an ulcer, and insists that he take a few weeks off. This means that Mike, who has been gently coaxing Wendy through her role, is replaced by an assistant director who is a bit less patient. In his very first day on the set with Wendy, he is filming a scene in which she has to ride a burro. It turns out that Wendy has a pathological fear of burros. “It was one of those things requiring psychoanalysis to be understood,” deduces Lori, the medical marvel, and frankly, I think Wendy would find the time and money involved in getting to the bottom of this phobia well worth the effort. But at the traumatic moment, when Wendy, quaking with fear, insists on getting off the burro, the assistant director calls her “some little dumb, spoiled doll,” and Wendy up and quits.

This could spell ruin for Richlieu Pictures. Mike is on the hook for $750,000 to Wendy’s father—“the figure seemed tremendously big, like the national debt,” Lori thinks—so without a finished film to release, the studio will go bankrupt. Lori is deputized to break the news to Mike, on holiday in Hawaii. His reaction—and sensitive readers may wish to avert their eyes here—is, “Oh—rats!” Lori helpfully reminds him, “You said yourself that the picture was jinxed—that it would never be released. If it hadn’t been this, it would probably have been something else.” What a thoughtful thing to say.

When Lori’s not building up the spirits of her director, she’s worrying about her boyfriend, Mace, a test pilot, because, you know, those planes could crash! Mace even proposes, but she tells him, “I’ll never marry you as long as you’re a test pilot.” Which essentially puts that relationship on ice. Not to worry, though—the nephew of her landlady is a hot Navy lieutenant who went to Annapolis. Dirk is putting the moves on Lori on their first date, and is speaking of marriage on their second—right before he sails off for three weeks. When the landlady starts planning the reception, Lori nods and smiles.

Back at work, director Mike has dug an old script that his father wrote out of the closet, phoned Central Casting, and now he has a hot property on his hands. Everything is going very well, “But then she remembered—trouble comes in threes.” So Lori is not at all surprised when one of the lighting guys topples off a scaffold. He’s a hemophiliac, and Lori turns to her ex-boyfriend Mace to fly the man to see a cardiologist. This is of no use whatsoever, because it turns out the patient has an abdominal aortic aneurysm. Because of his hemophilia, the doctors can’t operate, and the patient has only six months to live. Lori bravely visits the patient, who tells her he can’t wait to get out of the hospital so he can find a new home for his little dog. “Sure good thing I’m a widower and not leaving a wife behind. Only my sister.” Another job well done for Lori.

But with disaster number three over with, we can have a really great party celebrating the premiere of Mike’s fabulous new Oscar contender!!! And pick out a husband, too!!

Studio Nurse is not impossible to get through, but it’s nothing really special. Despite the fact that you’re supposed to be inside this movie studio, you really don’t get much of an idea of what it’s like to make a movie, beyond the stereotypical nursing of the petulant star. With over 30 characters to keep track of, it’s a little confusing trying to remember what’s going on. And it’s never a good sign when you pick up a book again, having laid it aside the night before, and have to flip through it to remember what the plot is and the main character’s name. And our protagonist is not the most endearing heroine I’ve ever met, even if she is perky and blonde. The book isn’t badly written, but it’s just not very much fun. Which doesn’t give you very much reason to read it.
Posted by Susannah at 9:41 AM