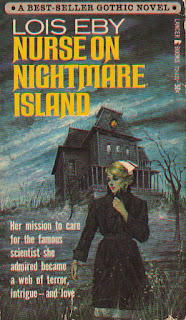 
Helen Barris was a conscientious nurse. When she surmised from his letters that Dr. Harvey Jenkins, the world-famous physicist who had been her patient at the hospital, was on the verge of a relapse, she went immediately to Morago Island, the ancient pirate hideout where he was recuperating. She knew her mission of mercy would be incredibly difficult. She couldn’t know that before the weird affair was over, lives would be lost—and her own life would be magically changed by an overpowering romance.

REVIEW:
The very fact that I was unable to find one single sentence in 222 pages that I felt worthy of sharing as a Best Quote says quite a bit about Nurse on Nightmare Island. The island wasn’t actually a nightmare, and truth be told, the book doesn’t really qualify as a nightmare, either; it’s more of a complete snooze. But with the aid of a sharp pin, I managed to keep myself awake for most of it, so here we go: Nurse Helen Barris has been convinced by a series of letters from former patient and physicist Harvey Jenkins that he is hallucinating a six-year-old boy Tony, who is the exact age and has the same name as his own dead son! So she takes what appears to be an endless vacation and jets to Moraga Island in the Antilles to attempt to lure Dr. Jenkins back to the hospital. But when she arrives, it turns out that there actually is a six-year-old boy named Tony living on the island! Like every other situation in this book, a whole lot of angst and pages turn out to be a non-issue.

Now that she’s found that Jenks is actually sane, she spends her days posing as a model while he paints portraits of her with tropical flowers in her hair. Oh, and she gets a job as a nanny to the boy, who has been kidnapped from his mother, Cecily, and her second husband, Rupert Manning, by his father, Philip La Rorsch. Philip owns most of the island, and tells Helen that he kidnapped Tony only because Rupert dangled the boy over a balcony five flights up, which he learned from the boy’s nurse, Janna, who went with Cecily and Tony after the divorce and yet remained loyal to Philip. Got all that?

Cecily arrives on the island claiming that Philip has tried to murder her three times—but she will risk her life to be near her boy, because she’s so devoted to him. She turns up at lunch and drags the painter and his model off for a picnic—where a poisonous snake is found, and killed, and assumed to have been planted there solely to murder Cecily. There’s a lot of to-doing about the dead snake when Cecily’s lawyer sends three men to obtain it as evidence of Philip’s evil deeds, but it has gone missing from the spot where it was buried after its untimely demise. Cecily is convinced that this is because Helen told Philip of the incident and he absconded with the late reptile. If all this sounds like a fairly entertaining scenario, let me disabuse you of that idea: This whole affair just comes off as labored and dull.

This isn’t the only attempt on Cecily’s life; we also get to witness her tumble from her hotel balcony after the rail has been vandalized, but she is not badly injured because she manages to grab some vines on her descent. Helen witnesses this incident and then spends a day caring for Cecily, who campaigns mightily for Helen’s alliance. But Helen is torn about who to believe. Philip, who glowers and shouts a lot, tells her that Cecily is staging the whole thing so as to coerce him into giving her a big divorce settlement. Helen’s boyfriend, a real estate venturer and gadabout named Doug whom she met on the island, is convinced that Philip is the bad guy, but Helen is trying to remain impartial. Doug is waiting for his business partner to turn up so they can seal a deal to buy land for a new hotel. When that’s done with, he wants to run off with Helen, because he feels she is in mortal danger living in Philip’s house. But she’s not sure about marrying Doug. While three dates don’t seem like all that much to base your decision to spend the rest of your life with someone, that’s not Helen’s real worry—she is concerned about what will happen to Tony if she leaves.

Adding to the tortuous plot is the fact that Tony’s nurse Janna, who also fears she is going to be killed, has holed herself up in a locked room in a cave under the island. Helen is trying to get Janna to come out, and when she finally gets into Janna’s room, the nanny’s wrists have been slashed, and Helen is concerned that it wasn’t a suicide attempt but a murder attempt! Fortunately, Helen’s fast actions save Janna’s life, and she’s so speedy about it that she still has time to pack Cecily and Tony off with Doug and his newly arrived business partner on Doug’s boat and then impersonate Cecily at a meeting on a cliff that evening with someone whom she assumes will be the murderous Philip.

It turns out that it wasn’t really Philip who was trying to kill Cecily, but the plot was so transparent that I was not at all surprised at the ending—except by the last few pages, when Helen, recuperating at Philip’s house after the real killer finally succeeds in offing Cecily and in bashing Helen unconscious, declares that Philip has been tortured for years by his suspicion that someone poisoned his mother, driving her mad and inspiring her to dig up this tree on the patio with her bare hands just before she died babbling about Heaven and death. Helen has uncovered the secret behind all that in a book about trees—I am not kidding—and now that she’s clued Philip in, he “was whole again,” and did you also pick up on the fact that he is now also, conveniently, a widow, and so free to marry again? Again, this may sound amusing in synopsis, but in Lois Eby’s leaden prose, it’s only inane.

This book poses as a Gothic story, but the house is not much of a character in this book and is, in fact, “a warm house, a loving house.” In addition to posing as Gothic, the book also wants to be a mystery and a romance—and it ends up zero for three. The writing is so perfunctory and uninteresting that I cannot begin to imagine what made the publishers think it deserved more than 200 pages. The plot is contrived and confusing, yet nonetheless manages to be completely predictable. We would actually be better off if the book was spectacularly bad, because an epic fail would at least engender some strong emotion—but the only emotion this book gave me was a mild bewilderment.
Posted by Susannah at 1:24 PM