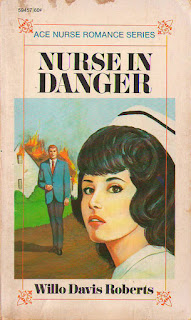 The voice coming over the phone was like a deadly purr. “Keep your mouth shut, nursie. Because, if you don’t—you’re dead.” Nurse Denise Morgan hung up the receiver in an agony of trembling. She hadn’t really seen the man who had tried to kill her patient—only his silhouette, as she reeled backward from the blow he’d given her. It was a vicious, hate-filled plot, and Nurse Denise found herself in the middle of it. Only the strength of Dr. Pat Riordan kept her on an even keel … as they waited one dark night to spring the trap.