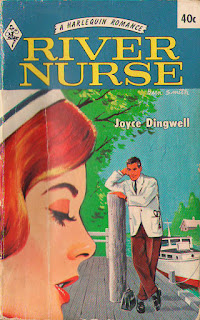 Cover illustration by Bern Smith
‘Helping Hands,’ in its quiet riverside backwater, must be the most unorthodox hospital in Australia, thought Maggie when she arrived there fresh from the clinical efficiency of Southern Cross Hospital. But she soon found that its methods—and its doctor—were none the less effective for all that.
GRADE: B+
BEST QUOTES:
“You’ve the main requirements needed of a button seller. You’re young and pretty.”
“Twenty-two wants action. It also, and Maggie admitted this rather ashamedly to herself, wants its own cash.”
“You have never understood the heart apart from what’s revealed to you through your wretched stethoscope!”
REVIEW:
There are plenty of Harlequin nurse novels out there, but I have to say that I generally don’t reach for them (in case you haven’t noticed). They’re long, for starters, and I don’t mean just the page count—I seldom find a VNRN of more than 126 pages (the standard length) that deserves to be. The covers are also generally fair to middling, so they don’t entice, either. But I had enjoyed another of Joyce Dingwell’s books—Nurse Smith, Cook—so I picked up River Nurse with less trepidation than some. And I found it worth the time, almost meriting 192 pages.
Maggie Chappy has just graduated from nursing school in Sidney, and she is a rare breed in that she graduated quite at the bottom of her class. (Which reminds me of the joke: What do you call someone who graduates at the bottom of their nursing class? A nurse. Ha! Ha!) Having made it through three years of school, the school matron tells her, “You are no longer a completely feckless, stupid, ignorant girl. My training has seen to that.” Phew! Yet she is now planning to abandon her promising career to move to a backwater town accessible only by river to keep house for her uncle, who raised her (she is yet another orphan nurse) and paid for her nursing school. The rub is that there is a convalescent hospital in that town, run by the sister of the nursing school matron, that needs a nurse. Fortunately for Maggie, when she arrives in Jonathan Town, she finds that her uncle, who has been doing nicely for himself for the past three years, is not interested in having her keep house for him, so off she is packed to the hospital.
She arrives on the same day as Dr. Jude Caulder, who has been sent to this godforsaken backwater for a three-month stint before he joins his father at a more prestigious practice in the city. He’s a grumpy Gus about it, and is X-ing off the days on his calendar before he gets to leave. He’s the only doctor in the house, and indeed the only white male in sight who is not a patient, so there’s really no question about who Maggie is going to fall for.
It’s a slow, meandering ride through three months of adventures with patients, livestock (Maggie delivers a calf in one sweet scene), administrators who want to close the place down, and even natural and man-made disasters (a flood and a hiking accident, respectively). The plot isn’t really the thing in this book; it’s more the gentle humor, the well-drawn characters, and the pleasant pacing that make this book worth reading. It’s not at all campy, or even really laugh-out-loud funny, but it is amusing. At one point Jude walks into a kitchen overflowing with comestibles for a party and delivers a short lecture on the role of saliva in digestion. Three pages later, it’s tea time, and “the pleasant business of starch-splitting ferments began … bother that man! … the morning tea began.” This kind of simple pleasure pervades the book, even through to the ending, which is a reference to a long-running joke that what the hospital metes out best is tears—meaning sympathy—and sponge cake (Matron Dora is quite the baker). It won’t be the best, or the most memorable nurse novel you’ll read, but it’s definitely worth your time.
Posted by Susannah at 1:26 PM

Email ThisBlogThis!Share to TwitterShare to FacebookShare to Pinterest
Labels: theme - failure to communicate