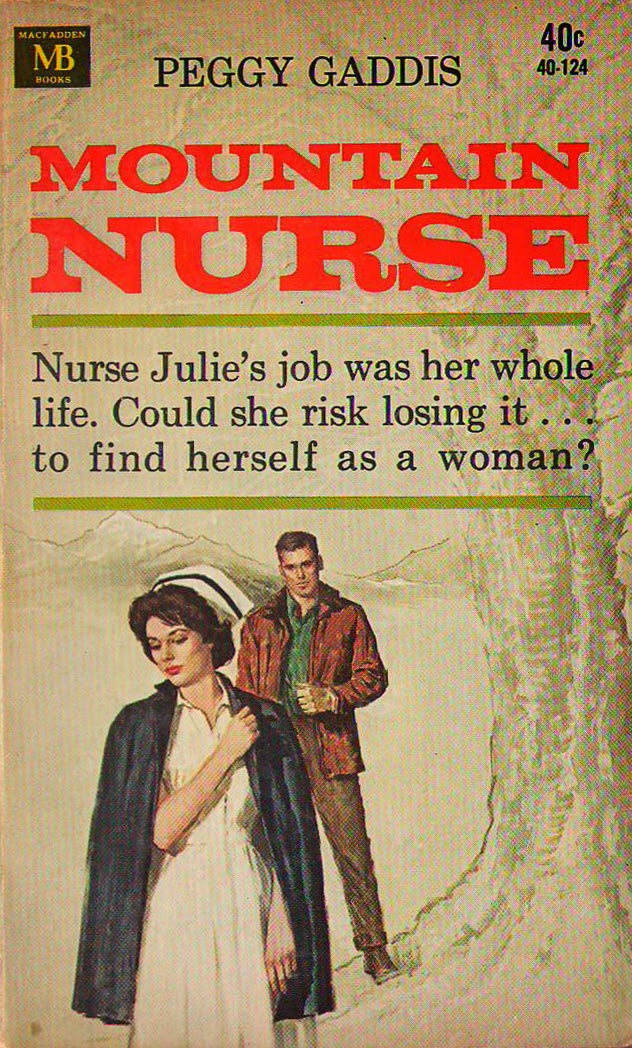 "I’m not going to ask you to marry me," Ken said—and Julie felt the words like a blow. For one awful moment she was speechless. Then her angry, hurting words rushed out. "I don’t want you to ask me to marry you! I wouldn’t even if you did!" After all, why should she? Her fabulous job—the job that meant so much to her—was waiting. Who needed Ken? But her heart lurched, for not until this moment had she admitted even to herself that she was in love with him.

BEST QUOTES:
"It’s colder than the heart of organized charity out there tonight."

"A woman doesn’t like to be told she’s remarkable. She’d much rather be told she’s beautiful, or alluring, or charming."
REVIEW:
This book may well be unique among VNRNs in that the heroine, Julie Winston, is an unmitigated snob, and remains so right through to the end—or at least we are not given any indication that her underlying character has changed. Out of the gate, she is ferociously condescending toward the patients and families that her sister, widow Linda Blake, cares for in this rural Georgia mountain setting (the quintessential Peggy Gaddis novel backdrop). She prefers her upscale Atlanta clinic, which caters to rich folk, and has swooped in to insist that her sister return to civilization with her. Linda, however, is a sweet, dedicated, selfless type who would never leave her patients, even if she is, according to Julie, "overworked, poorly paid, miserably uncomfortable, lacking in all the things any woman her age should have." Not Julie: She’s even horrified when one of her colleagues leaves her post as a "luxury nurse" to join the war effort, telling Linda, "The idiot has joined the Army Nurse Corps and asked for overseas duty. Can you imagine?" She might as well admit that she beats puppies for what this remark is supposed to do for our view of Julie.

Out on call with Linda in the rickety jeep, and none too impressed with the "squalid" domiciles they visit, Julie is nonetheless pressed into duty when one very ancient woman, Miss Dovie—who is rumored to be a witch and therefore avoided like Ebola—is found near death from a stroke and no one else is willing or able to serve as private nurse. To her credit, Julie volunteers for the duty—but is completely ungracious about it; she’s just called Linda a "blind idiot" for refusing to leave the mountains, when her next words are to ask for instructions for caring for Miss Dovie. "I’m willing but not eager," she says. The neighbors drop by with firewood and food, but absolutely will not "set foot in a witch’s house" who can’t die, "she’ll just get on her broomstick and fly off to join her master, the Devil Hisself!" according to the roughneck who drops off groceries that include a "mess of the fresh"—butchered hog, that is.
When a huge blizzard starts up the next night, it’s looking like Julie is going to be snowed in for some time, but then there’s a pounding on the door. It’s Kendall Stockwell, aka The Wayfaring Stranger, God help us, a well-known folk singer whom Julie apparently saw perform in Atlanta last summer. He’s in the neighborhood looking for folk songs "that haven’t been sung to death by the others," he says, though Julie thinks it’s odd that he would just drop his very successful career to go wander the mountains in the middle of winter. His jeep is stuck in the road, so he’s got nowhere else to go, and Julie invites him in. The pair hangs out and chats for several days, and on a hike to the top of the mountain, Julie gets an anti-proposal when Ken tells her she "needn’t be frightened" because "I’m not going to ask you to marry me." Phew! Oh, wait, no; "his words had been a blow that struck straight at her heart. Not until this moment had she admitted even to herself that she was in love with him; but his words had torn away the gossamer cloud that had concealed this fact from her consciousness." If her sudden ardor wasn’t enough to make you ill, the florid prose should surely put things over the top.
The reason he can’t marry her is idiotic, of course: His business partner and best friend swindled him out of the money that should have been his, so he walked out on all his engagements and took to the hills, and now he has legal liabilities and no money to support a wife. He couldn’t possibly take his friend to court, he insists, because it would "prove to the whole world what a first-class fool and chump I am." Apparently it’s not the fact that he actually is one that’s the issue; it’s only if everyone else knows it, too.
Back at the cabin, the snow finally melts enough for the doctor to arrive to check on Miss Dovie and take the pair back to civilization. It occurs to Julie that she might want to say goodbye to the patient she’s cared for day and night for a week, but the doctor says, "She’s in a coma, Julie—she wouldn’t know," so she doesn’t bother—that’s our shallow Julie!—and heads back to Linda’s house, where she has her first encounter with a mirror in a week, much to her horror: "Lindy, if he fell in love with me when I look like this—then it’s just got o be love, hasn’t it?"
Everyone’s problems are neatly tied up in the end, of course, though there does seem to be a little epidemic of comas going around, and even Linda lands a fiancé, despite her tearful devotion to her husband, dead these three long years. It’s not a bad book overall, but there are the bones of a better one poking through that make it disappointing. The ending overflows with the usual Gaddis treacle about how blissfully happy everyone is when they are engaged, even throwing in the ubiquitous "I want whatever Ken wants," and it wouldn’t be a Gaddis book without a reference to spanking—though in this case it’s Linda threatening to paddle her sister, so that at least was a little twist. As it is, the story comes off flat, without a lot of sparkle, and it’s just perplexing that this pair falls for each other at all, let alone in two days, because neither of them seems all that interesting—although Julie at least is a feisty lass. So while I’ve read worse Gaddis books, I’ve certainly read better, and with such a promising setup, it seemed especially unfortunate that she was not able to pull off a better story in Mountain Nurse.
Posted by Susannah at 1:20 PM