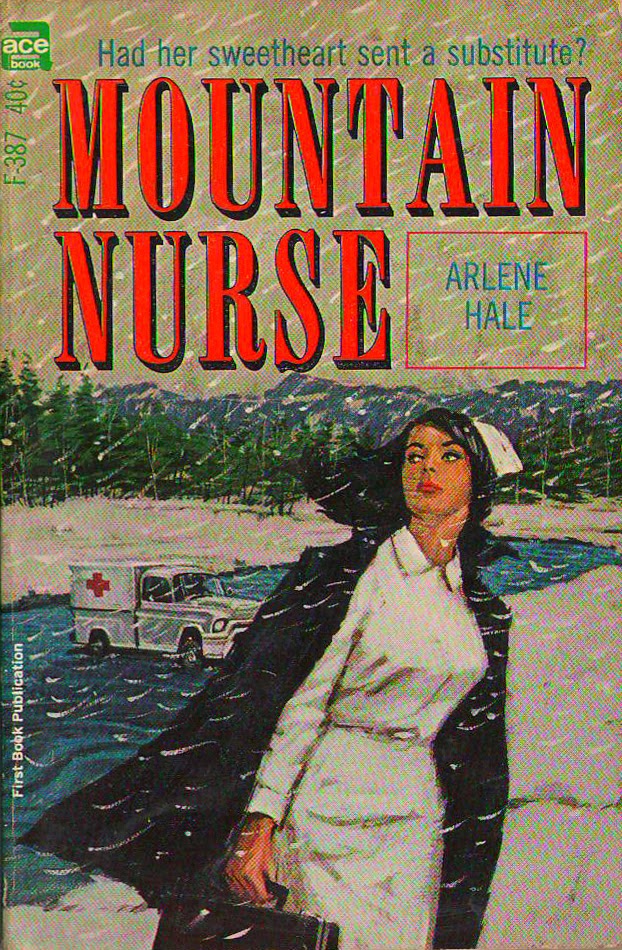 By Arlene Hale, ©1966
Nurse Gwen Douglas loved the small mountain village where she worked alongside of her brother—the only doctor in this isolated community. The only shadow in her life was the empty cabin a hundred yards away—the cabin of Hap , the man she loved. Hap was a restless soul, who wandered through the mountains, only to return to her and Three Rivers in the snowy winter months. But this winter, he was late in returning, and suddenly Gwen found a tall dark stranger showing up in his place …
GRADE: B+
BEST QUOTES:
“Come on, Baby, let’s get with it. We got some dancing and things to do.”
“If you don’t put your arms around me pretty soon, I’m going to have to act like a brazen woman.”
REVIEW:
Gwen Douglas works with her brother Bob in . She’s in love with the boy next door, Hap Benton, who is apparently a migrant worker, returning to town only after Thanksgiving and blowing back out again when the snow melts in the spring. Naturally, no one, including her brother, can figure out why she pines for the dope. As the book opens, the first flakes of November are starting to swirl from the clouds, so Gwen starts jumping at every slamming car door, thinking it’s her wayward beau come home. It’s not. Unfortunately, though, this leads to a fair amount of inner pining: “Hap! A carefree soul, if ever there was one. Would he ever settle down here in Three Rivers? Would he ever put a ring on her finger and make it official? She could only hope that her love and his need of her would eventually be strong enough to overrule his restless feet.” Uh, good luck with that, sister.
When that midnight pound on the door finally comes, it’s a stranger, Cole Fairfax, who tells Gwen that Hap has told him he can stay in his house. Cole is a moody, broody fella with a dark secret that makes him clamp down the minute anyone asks him about himself. But soon we are allowed inside Cole’s head, long enough to find out he’s been sued for every last one of the many dollars he once owned, and now he’s destitute and heartsick over some gal named Dolores; that part of the story unfolds slowly and gracefully, and makes Cole the most interesting character in the book. What is less of a surprise is that Cole is actually a doctor, and since he’s been dropping major hints in that regard all along (“You know quite a lot about blood poisoning, it seems,” Gwen tells him early on), the only person who will be shocked by the eventual revelation is Gwen herself.
Meanwhile, this nice young man from the Double S Ranch, Scott Stevens, starts putting the moves on Gwen, who reluctantly dates him despite her undying commitment to Hap. Then, the night Scott finally reveals he has long been in love with Gwen, there’s another midnight knock on the door, and this time it really is Hap! From the word go, he’s not a very likeable character: He’s an hour late for Thanksgiving dinner, he’s possessive and rude to Gwen, too joking to have a serious conversation with her about their relationship, and he immediately leaves town again to take a job at the ski resort, too far away to see Gwen more than once a week or so. For the first time, however, Gwen is starting to see the thorns on the rose, and Scott presses his suit, proposing to her on their second date, wooing her with the VNRN classic: “I think you could love me if you gave yourself a chance.” Well, all right, then! It works, though; now “when she thought of him there was a warm glow inside her.” Complicating matters is the big smooch Cole lays on her, saying, “I figured if I could respond to you, there was still hope for me.” The flatterer!
So now there’s just the matter of which of these eligible bachelors will win Gwen in the end, what Cole’s real story is, and whether everyone is going to survive the enormous blizzard that blows up, causing several medical emergencies that Bob and Gwen have to skid all over town to attend to. I was frankly a little surprised about which of the gentlemen triumphed in the end, so that was something, and the final paragraph was cuter than most. Overall this is a good story and well told, which makes me scratch my head a bit at the erratic and usually mediocre product churned out by Arlene Hale; this is the 12th nurse novel written by Arlene Hale that I’ve read, and only the fourth to garner a grade higher than a C. I can’t relegate her to the same category as Peggy Blocklinger (aka Jeanne Bowman), who is a reliably dreadful horror show. But given the fact that Hale churned out about 45 VNRNs, I do wish she’d concentrated on quality—since it is clear she can write a good story when she wants to—instead of quantity.
Posted by Susannah at 8:06 PM