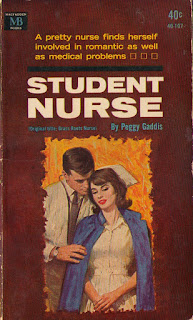 “Being nice to you could easily become habit-forming,” he said quietly. Loyce Hamilton, pretty student nurse, felt a warm sweetness in her heart at handsome Reed Shelby’s words. For he was the head of the Shelby clan—and a bachelor to boot! But when Loyce realized the callous way the Shelbys dominated everyone in town, the warmth began to chill. And Reed’s jealousy of Dr. Gordon Grant didn’t help matters …

BEST QUOTES:
“People who are destitute or almost, and who have mental quirks, are called crazy! But if they have enough money to get themselves out of unpleasant jams, then people say they are merely eccentric.”

REVIEW:
In Loyce Hamilton, we have a nurse named in one of the finer Peggy Gaddis traditions (see also her Leota, Luana, Leona, and Linette). Also like these lovely ladies, Loyce is a strong, capable, and compassionate nurse working in Georgia in a small community hospital of only 40 beds out in the sticks. There she meets another Gaddis staple, the stuck-up city doctor who hates the country but is forced to work there until his med school loan is paid off and he can go back to the city and become the highly paid specialist that only pompous, lazy, heartless snobs endeavor to be.

While she serves out her month-long rotation, Loyce rooms with the Shelby family, local landowners who own, well, everything in town. The family is headed by Ruth, the “very, very handsome” but “big—very big” spinster sister doomed never to marry, the numbers stacked against her: age (30), height (5'10"), and weight (200). Rounding out the family is Reed, the big brother, the obvious love interest, and Marcy the sister-in-law, widow of Hank, who died in the war. Marcy has a son, Paul, but she has been divested of any responsibility for the baby, who is cared for exclusively—and has even been renamed—by Ruth. Marcy is essentially a prisoner of the family, which they frankly admit: “Marcy wanted to stay in California and get a job after the baby was born. But of course we couldn’t permit that,” Reed tells Loyce. Marcy, though she has an inheritance that could support her, can only hand over the baby on command and cry. Loyce, hearing this story, is incredulous: “But for goodness sake, Marcy, he’s your baby!” she says. “I can’t see any reason you shouldn’t take the baby and go away.” There is no logical answer to this; all Marcy can do is fume that she’s a prisoner. She’s not exactly wrong; when she asks Reed if she can leave Georgia, he says she is free to go—but the baby stays. “This is his home; he’ll stay here and grow up here and take his rightful place.” Since she lacks the gumption to just take the boy and go, there she stays.

Loyce comes to fall for Reed, which we saw coming from page one. The two go on several dates, including to lunch at the Cloister, a historic hotel on Sea Island, which I know well; it’s like unexpectedly meeting an old friend when we drive up the causeway past the “century-old oaks, their massive limbs draped in swaying curtains of green-grey Spanish moss.” Despite these dates, when Marcy suggests that Reed is in love with Loyce, she all but falls off her chair: “I have never heard of anything so silly in my life,” she stammers. “Why, he’s never given me a second glance or a second thought!” This, after pages of him giving her tender looks and calling her “darling” and “wonderful,” and suggesting they honeymoon at the Cloister. If it were simple insecurity that makes Loyce respond so, I could forgive it, but it comes across as a false modesty that “nice” girls were forced to adopt in the day, pretending not to notice a man at all until the day he proposed, which I find irritating and stupid.

After the Shelbys grudgingly allow it, Marcy takes a volunteer job at the hospital, and while she’s there, she comes under the notice of Dr. Grant. So Loyce goes to bat for Marcy, telling Reed that she thinks the family is domineering and cruel to the spineless little lamb, pretty much pouring ice water on her blooming romance. Dr. Grant then shows up at the Shelby mansion for a meeting with the extended family, where he tells them he will stay in Shelbyville and marry Marcy—though he has never had any discussion with Marcy about his feelings for her—once again treating her like a voiceless pet. This time, however, she doesn’t seem to mind so much, and agrees to marry the doctor after he says that he will take her and the baby away from the Shelby house.

Though the family is in uproar, Reed later thanks Loyce, surprisingly enough, for having pointed out some hard truths, and he tells her that they will make it up to Marcy, possibly by even “allowing” her to remarry. But there’s another marriage he wants to discuss, and he asks Loyce if she will mind becoming part of such a domineering family. Loyce, horrifically enough, after having fought for Marcy’s independence, is thrilled to have the chance to shed her own: “After being alone most of my life, having to make my own decisions, hoping they were right and sort of muddling through, I can’t think of anything more wonderful,” she coos. Even if she insists that she is going to work after they marry, it can’t quite resolve my nausea after she says, “No place in the world where you are could ever be dull to me! It would be exciting and beautiful—because I love you so much!” Ew.

On occasion Peggy Gaddis can turn out a great book, but this is not one of her best. The biggest problem is that it rehashes of all the usual Gaddis gimmicks and sexist attitudes, even if the latter are largely a product of the times and the region. For most of the book Loyce is an admirable, outspoken woman who fights for the underdog, and Gaddis’ writing is generally entertaining. Though she’s capable of better, this book is enjoyable enough for an afternoon on the veranda with a mint julep.
Posted by Susannah at 5:32 PM