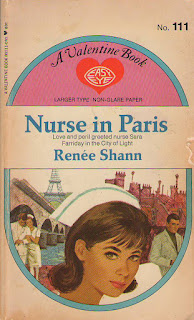 Nurse Sara Farriday was no stranger to trouble. Hospital duty had made her familiar with all kinds of pain and suffering. But she was totally unprepeared when disaster struck at her own  heart. Her romance with Don had been beautiful. She had never dreamed anyone could fall so deeply in love. But now, abruptly, it was over … the engagement was broken. And Sara left the shattered pieces of her old life behind to try to find a new life and new hope in Paris, the city of dreams. At first, it seemed to be working. To her own surprise, she found herself falling in  love again—with the dashing and charming Jimmy. But another tragedy brought Don back into her life—and she was faced with an impossible choice…

“‘Why do we poor blighters never get the pretty nurses? I suppose Matron’s scared one as good to look at as you would speed up the pulses. Mine’s racing, isn’t it?’”

“But who had tricked her and why? She began to consider fantastic possibilities. White slavery still existed in the world; unsuspecting girls still got tricked and sent to South America. Only a few months ago she had read a report about it.”

“‘Paris is full of strange people. I dare say London is too, but they seem stranger here.’”

“‘It’s quite a city.  A girl who keeps her nerve can have a lot of fun round here.’”

“For a man with a Colles fracture he looked remarkably perky.”

“‘A place like this makes you wonder why these people ever leave home. As soon as they get to Paris they nose out all the English restaurants, eat English food, never speak anything except English, read the English papers and go back at the end of a week thinking they’ve had a wonderful holiday abroad.’”

“‘The girl who was with him in the accident died a short time ago. Just as well, perhaps. She would have been much disfigured.’”

“He was in the hospital for a minor stomach ailment that only a man with a lot of money could afford to indulge so luxuriously.”

“‘The Princess is keeping your boy-friend Pablo warm for you.’”

“The driver took them across Paris with the usual Parisian disregard for life and law.”

REVIEW:
Sara Farriday is a 24-year-old British nurse engaged to a man she met while vacationing in Spain. She’s deliriously in love (though no one else seems to like the man much) and shopping for the dress she’ll wear to her wedding, which is to be in six weeks, when Don drops a bomb: They can’t get married in church because he was married before and got divorced. This is a blow, of course, surprisingly not because all the good alternative wedding venues are likely booked, but Sara quickly recovers. It’s only when a week later he confesses that his Mexican divorce is not legal in England so he can’t get married until he gets another divorce that she loses it and ends the relationship. It’s not clear why this is worse than a year’s worth of dishonesty about his past, but it appears to be due to the embarrassment of having to cancel the wedding and return all the gifts.

She’s so devastated that she can’t even work again, she says, because she’d have to tell her former manager that the wedding is off, which would be just too humiliating. Her mom, though, gets impatient with Sara’s silliness and makes an appointment for Sara to interview for a nursing job in Paris, which Sara is incapable of cancelling—again due to apparent misplaced embarrassment—so off she goes, even accepting the job because she’s unable to refuse. En route to Paris, Sara has the most tragedy-ridden one-hour flight ever: First the Arabic passenger across the aisle, who boards the plane in a completely sound state of health is stricken with a flu-like illness and actually dies after he’s tucked into the pilot’s bunk and Sara goes back to her seat to flirt with Jimmy Jordan, the man sitting next to her. Then the plane’s front wheel won’t unfold and the plane crashes on landing. It’s all OK, though, because Jimmy immediately stakes a claim as Sara’s boyfriend, and on their first date, this silly woman decides she could be falling in love with Jimmy. Even more curious about this date is the fact that on her way out the hospital door, whose mangled carcass is being pulled from the ambulance but Don’s? “Supposing he begged her again to marry  him. She couldn’t be indifferent to him despite all that had happened. Especially now he had had this dreadful accident …”

She finally has to care for poor Don, completely mummified in gauze, and in what was likely not intended to be a comic scene, when he sees her, “the tears rolled slowly and disappeared into the bandages.” In bed that night with fresh roses from Jimmy on her bedside table, it’s her turn to cry: “Which man was she in love with—Don or Jimmy?” My money says this flighty infant has no idea what love is.

When a previously well nurse dies of a flu-like illness, the penny does actually drop and Sara tells the hospital doctor about the sick man on the plane. Dr. Scully contacts the airport for a report: “One can’t be too careful. These nuclear bomb experiments could cause mutations in bacteria. We live in a  terrifying world, Farriday.” While Dr. Scully mulls treatment options, looking for an antibiotic effective against this virus (though by definition an antibiotic will not kill a virus), fickle Sara holds Don’s hand and calls him darling with alarming frequency, though she refuses to discuss marriage with him and bristles when the nurse matron tells her that she needs to marry Don to give him a reason for living, especially now that his leg’s been amputated. Unfortunately, Jimmy is bringing Sara home from a date when she’s met at the front door by the Matron, who urges Sara to go see her ailing “fiancé” immediately. Jimmy, rightfully livid, breaks up with Sara on the spot, and you will be shocked to hear that Sara makes absolutely no effort to reach out to Jimmy to explain the situation, because “no girl should run after any man.” In this case she should also be discouraged from action by a guilty conscience, though I am quite sure that she is not.

Then Jimmy comes down with the fatal flu, which is now rampaging through Paris, and Sara breaks a medical protocol by giving Jimmy, who is in the control arm of a trial of a medication that might cure it, the actual drug. He is immediately cured, but Sara is sacked, and stupidly refuses to take the pay that is due her. With nowhere else to go, she accepts an offer to be a private nurse for a rich former patient who had stared at her a lot. The man is now completely well, and Sara is somewhat concerned that he has immoral acts on his mind, but all he wants to do is drive her around town in his convertible and have her wave to his friends.

Eventually, though, he does propose, and tells her he’s booked tickets for them to go to London and meet her parents and get married. Horrid Sara decides she will accompany him to London—but “once she was safely back in London she would walk out on Monsieur Bruyarde without any pang of conscience.” Unfortunately she comes down with the flu on the way to the airport, and once there becomes too sick to walk, or to understand that Monsieur is being arrested, and then Jimmy mysteriously shows up to take her back to her old hospital, this time as a patient. When she’s well, she learns that the Monsieur had been hoping to pass Sara off as his dead wife, whom she resembled, so as to keep his wife’s money, which somehow he had not inherited. All that’s left is for her and Jimmy to reunite and we can end the book.

Renée Shann has in the past given us a couple decent reads (Ring for the Nurse and Student Nurse), and we can put Nurse in Paris up alongside them. The writing is regularly campy, with great lines such as “After a time Jimmy grew tired of contributing a solo performance as the life and soul of the party,” and we can laugh through comic scenes such as when Sara and her spirited roommate Lulu are driving around the Bois de Bologne at 4:00 am trying to find two of Lulu’s boyfriends who have decided to duel over her. Interestingly, Sara is something of an unlikeable character, too wishy-washy to decide which of her own boyfriends she really loves, too backward to clear up her misunderstanding with Jimmy or look for a job, immoral enough to cheat an employer out of a plane ticket to London. The plot is a little random, with quite a few unexplained loose ends, but in the end it’s a better-than-average book with enough joy in its pages to tide you over the rough spots, even if one of them happens to be the heroine.