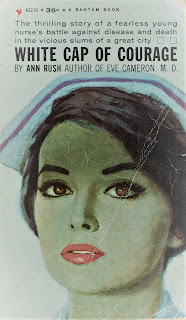 When Nurse Sally Camlin learned that politicians threated to close the doors of Memorial Hospital, she knew she had to fight. The big, old hospital was the only source of medical aid for the surrounding slums. Sally’s only ally was young Dr. Peter Adamson. But he was a rough, aloof young man who came from the slums himself. He was known to consort with the biggest wheels in the powerful vice syndicate, who were hand-in-glove with the politicians. Sally threw her career, her reputation, her very life, into this fight. Would she win?


“You can always get a rise out of a housekeeper if you say she doesn’t work hard, but she’ll belittle it herself if given half a chance. Ask a woman patient what she does and she’ll tell you, ‘Just a housewife,’ as if it weren’t the most important thing any woman can be.”

“Nursing’s no job for a gently raised girl.”

“Lalla had always been a predatory female to whom a  man who was another woman’s property was worth twice what that man might have been roving free.”

REVIEWS:
There’s a lot of excitement at shabby old Memorial Hospital as Chapter One opens. Nurse Sally Camlin is working the night shift in the Emergency Department when her friend Nurse Janet tells her that the hospital board is planning to close the scrappy establishment. Then a gunshot victim is wheeled in, and Dr. Peter Adamson is called to staff the case. “She could not like the young doctor,” who goes around with a defensive scowl on his face and never says hello. But he has a tragic past, with a drunk father and a mother killed when he was five, and he grew up in the town’s slum, the quaintly named Shacktown, so he’s had to work hard to put himself through school. “He’s been too busy to learn how to make friends,” admonishes the kindly chief of staff Dr. McLeod, Sally’s longtime family friend and Dr Adamson’s medical mentor. “Pete Adamson’s a fine boy. And a good doctor.” And when Dr. Adamson takes the shooting victim to surgery, Sally helps out as scrub and learns that the doctor knows this hoodlum, but also cares about him, and Dr. Pete even compliments her for her work on the case. So—and this should come as little surprise—Sally is soon asking Dr. Peter to come sit with her and her friends at lunch.

She has a fiancé, of course, Dr. Bob Quenton, who is relentlessly pursuing an established surgeon at the swanky hospital across town, hoping for a cushy job where he works three days and golfs two, but somehow this unfortunately means also pursuing the doctor’s beautiful and sneaky daughter Lalla. So Bob spends a lot of time out on dates with Lalla, with or without her father, in the name of chasing the lifestyle—one that the hard-working and dedicated Sally doesn’t approve of at all. That’s Classic VNRN Trope #2, for those of you keeping scores at home.

As the hospital heads toward shutdown, Sally enlists Pete and a number of her more dedicated hospital pals (Dr. Bob not being among them) to start a campaign to keep the hospital afloat. In the meantime, she’s often working alone in the ED, which is a most happening spot at 2:00 am, very popular with the local gangsters, who turn up with such regularity that one wonders why the hospital hasn’t hired a guard. Tony Amando, the mob boss, drops in with his lovely daughter Maria, who’s swallowed a bottle of sleeping pills after finally figuring out what dear old dad does for a living, and a few days later Tony’s thugs, the adorably named Spud and Vin, wander in to threaten Sally in order to extract information about how the young gunshot vicitim is recovering from his wounds. Sally helpfully tells them everything they want to know, including the room where Nick is parked, so they can just nip up and collect his weakened body and haul it back to their shack in the woods, taking Sally along with them, since she could ID them to the cops.

Pete also ends up at the shack, on the business end of a pistol belonging to another mobster named Abalone (tee hee!), and the anxiety of the situation causes them to fall into each other’s arms. Surprisingly, in the big showdown scene at the end, Sally actually winds up taking a slug in the gut, which is apparently cured not with immediate surgery but lots of bandage changes and three weeks in the hospital. It’s a stupid mistake, one that is easy to research, but it’s honestly about my only beef with this book. In the closing pages, when Sally breaks up with Dr. Bob, he’s outraged that she wants to keep working: “In other words, your work is more important to you than I am.” She sensibly responds, “No matter how much I loved the man I married, I’d have to go on being myself, not just a shadow of him.” Pete, on the other hand, is thrilled to find that Sally has a house of her own to offer him, not to mention her deceased doctor father’s completely stocked home office, and that she wants to keep working at the (saved, of course) hospital “until you get on your feet.”

Sally is always a strong and forthright character who calls it hypocrisy when she sees it. Early on, she tells Bob she doesn’t understand why they have to wait to get married—although this device conveniently allows the heroine sufficient time to come to her senses and realize that her betrothed is an ass. “I wanted us to be married, wanted to help with your expenses at graduate school next year so that we could be together. That’s a wife’s privilege, Bob—to help wherever she’s needed. You’re too proud to accept things from me, but jump to Dr. Roberts’ whistle because he can help. I can’t understand it.” (Bob pulls out all the stops with chauvinism and irrationality when he says, “It’s a matter of masculine pride. I don’t want to feel obligated to the woman I love.” He should feel obligated every time she walks in the door.)

The writing here is of that peaceful, fat style of early VNRNs, where the camaraderie of the hospital staff is tangible and the characters feel honest and true. It’s not laughably campy, but the kidnapped-by-gangsters plot line is certainly delightful (and not altogether uncommon; see also Emergency Room Nurse and Society Nurse). If Pete starts out the book with more than a whiff of Asperger’s (“‘Kerosene and—’ Peter began, then broke into a grin. ‘You’re joking. For a minute—’”), and his Darcy-like transformation isn’t completely convincing, he is a compassionate and competent character that we can appreciate for his respect for his bride-to-be. Interestingly, the other VNRN of Ann Rush’s that I’ve read (Eve Cameron, M.D.) gave us a woman who was a doctor, but much more of a spineless loser than Nurse Sally. Ms. Rush has penned at least three more nurse novels (one of which is enticingly subtitled Passion at the County Hospital!), and I look forward to discovering if her next books give us more stalwart characters like Sally or just stale pushovers like Eve.