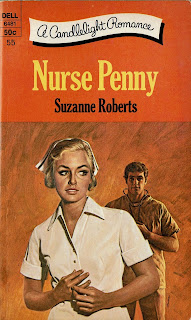 Penny Alden came to the plush Ritter Clinic in wealthy Palm Beach for one reason—to gain the nursing skills she needed to help her fiancé, Dr. Kevin Flanagan, in operating a rural hospital for the poor and needy. But at the Clinic the lovely young nurse found that even her dedication was not immune to the pleasures of a sun-filled, carefree life—or to the attentions of handsome, playboy-doctor Mark Hobson. How could she have let this happen, Penny desperately wondered. How could she have fallen in love with one man while engaged to another? How could she stop her foolish heart from betraying all she believed in? Torn by conflicting emotions, Penny desperately searched for her right path as a nurse—and as a woman.

BEST QUOTES:
“She would, as his wife, have to learn to take a back seat, for that was as it should be.”

REVIEW:
Nurse Penny is another of those nurses who has worshipped her fiancé, Kevin Flanagan, since she was a bitty girl in rural Georgia, following him around like an obsessed puppy, remaining utterly devoted through his years away for his medical training—even becoming a nurse because she thought it would please him. Now she and Kevin, who is shaping up to be one of the world’s greatest surgeons, are working to build a small hospital in their backwoods community. To that end, Kevin has decided that Penny should go work in Palm Beach for a year at the hospital where he did his fellowship so that she can learn about their research methods and nursing as well. She’s not sure she wants to go, but “she was so used to having Kevin be the  boss that she decided to say no more about it.” So off she packs to Florida, where she finds the lavish lifestyle quite shocking—and enjoys shocking back, by donning her threadbare hillbilly clothes, though with her paycheck she could afford to go buy better—and the workload laughably light, so it’s not clear if she’s actually learning anything from a nursing perspective by caring for rich hypochondriacs.

In her spare time, she is hanging out in the research lab and typing up unspecified notes to send back to Kev. She also walks out a lot to the pier, and early on is waked by Dr. Mark Hobson when he pulls in to the dock in his cigarette boat. She is furious at Mark’s arrogance—“I don’t like him at all!” she decides—so we savvy readers instantly recognize that it won’t be long before she falls into his arms.

Indeed, Mark quickly turns out to be very different from how he appeared at their first meeting, and soon Penny’s little heart is all atwitter every time Mark is near. She snaps at him a lot, though, because he’s super-rich and she’s a snob. But eventually she gives in to her attraction to him—and now we have pages and pages of her insisting to herself that she’s really in love with Kevin even if she’s never felt the same kind of thrill when he’s near, just a sort of sisterly affection for the man she’s determined she’s going to marry because she promised! At a glacial pace Penny starts to creep toward choosing passion over friendship—but then when she’s home for a weekend, Kevin is feeling a little nauseous—and as with the foreboding cough, we can easily predict that his days are numbered. Sure enough, he drops dead of a congenital heart defect, which utterly lets Penny off the hook in terms of standing up for what she believes in, or at least what she ought to believe if she ever gets around to it.

With Kevin gone, everyone believes the plan for the rural clinic is as DOA as Kevin was, since Penny, who has been ferociously dedicated to this dream, is never considered as someone who could make it happen—although actually, with all her contacts in Palm Beach, she is in fact ideally suited to raise money, and has even already collected $5,000 from Mark’s mother. But she’s a girl—so she goes back to try to manage the healthcare of the entire community alone, with a flu epidemic crashing down on them all, so Penny is working 18-hour days and driving herself and Kevin’s dilapidated jalopy into the ground—if only there was some man who would show up and solve all her problems!

This book is dull at best, irritating at worst, with all Penny’s endless waffling about whether she should  marry a man she isn’t really in love with. The book’s failure to see Penny as having any power, either to decide her own life (Kevin’s early exit is a copout), or even to provide care for her community (did the author have to subject her to an medical crisis? Or if she did, why couldn’t Penny have reached out for help and so managed the situation herself?) makes her largely a victim of circumstances. While fortunately ending happily for Penny, she is a passive character who needs the men in her life to rescue her, either by dying or by showing up with a working automobile, a medical license, and a trust fund. As a result, we don’t have a great time following this limp dishrag of a heroine, so I can only suggest that you let this Penny drop.