Nurse with a Problem 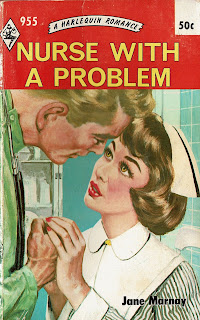 Only her work as a hospital nurse kept Noelle Carlyon from giving way to despair when her sister Leoni married Timothy Yorke—the man Noelle loved. Knowing that Leoni was not in love with Timothy made the position even harder to accept; Noelle could foresee tragedy for her spoilt young sister. Then John Corringway, a brilliant young surgeon, proposed marriage to Noelle, but Noelle, whose emotions were still centred on Timothy, could not accept, for to her there should be no marriage without shared, equal love.  A trip to South Africa gave Noelle time to clear her confused thoughts, but she had yet to play a part in a tragedy before she found true happiness.

BEST QUOTES:
“Don’t try out your fatal charm on me. I’m much too hard-boiled.”

REVIEW:
I couldn’t help, every time I picked up this book, singing the Elvis Costello song: “I feel like a boy with a problem”—except, of course, with a nurse instead, who here is Noelle Carlyon, and who has multiple problems that must be sorted through. In the first half of the book, her problem is that she’s in love with Dr. Timothy  Yorke—but he’s in love with her sister Leoni, and she’s in love with a married man, in the most nauseating way: She’s abandoned her career as an actress in London to come home and sob into her pillow for days on end—and to agree to marry Timothy to go off to Nigeria with him, even though she doesn’t love him.

Noelle, meanwhile, is sweetly courted by Dr. John Corringway, who takes her out for long conversations and pleasant walks and hot tea. He is smart, funny, kind, considerate, and gently presses his suit in a way that genuinely won my own heart. Noelle, however, does not reciprocate his romantic feelings, and the first hundred pages of the book follow her relentlessly circular debates about whether she should marry a man whom she esteems greatly but does not love. Frankly, it gets more than a little dull.

Eventually Noelle takes a gig as travelling nurse to a rich woman who is going to South Africa to see her daughter, and though the back cover paints this trip as a big turning point, it is really just a blip in the story except that on the boat home Noelle runs into Timothy’s black-sheep brother, Rory, and spends a lot of time hanging out with him. He is by far the most interesting character in the book, a playboy two-bit actor (anyone else see the impending connection?) who romances with lines like, “No girl has a right to be such a bewitching temptation if she doesn’t expect to be kissed.”

Back at home, Leoni and Timothy come back early from Nigeria—he’s abandoned his dreams to practice medicine there because Leoni has had a premature baby and has fallen quite to pieces afterward. Timothy asks Noelle to move in with the Yorkes to help tend to Leoni, who plays a wan, vapid wraith—likely she has a bad postpartum depression, but here she just comes across as a bigger baby than her newborn son, Bill. Now, finding out that Rory is back in town after many years away in London (another big hint!), Leoni becomes a wan, vapid wraith who seldom leaves her bedroom or stops crying—and guess what!!!—Rory is the married man that Leoni had an affair with!

Gold-digging Rory continues to hang around the extended family because Noelle’s parents are guardians of her orphaned cousin Judy Temple, who is going to inherit a fortune when she turns 21 in two years, and he plans to marry her money. Noelle wants to out him as a married man—although whether he really is married is not certain—and so save Judy, but Rory threatens to reveal that he’d had an affair with Leoni, a fact that she has never told her clueless but devoted husband, and will even throw in the scandalous lie that little Bill is actually his own child!!! So, torn between her desire to save her sister and her cousin and unable to do both, Noelle is stretched thin with anxiety, and seldom able to see John, who worries that her stress is caused by living alongside a man she’s in love with but can’t have.

The family is saved when a woman in London goes to see the movie Witch of the Veldt and recognizes a bit actor on screen, and her husband chases Rory down at the Yorke residence to reveal that his sister is married to Rory. The cad, fleeing in Timothy’s car at high speeds, surprisingly has a catastrophic car crash, and even more amazingly survives, and even more shocking than that, develops permanent amnesia!!!! His wife turns up with their four-year-old daughter to claim him, though it’s not certain how, with his personality and all other physical abilities intact, he is not going to revert to his bounder ways and give her the slip as soon as the casts come off. John drops by to take Noelle to lunch, and—yet another major plot twist—Noelle’s eyes “seemed filled with misty stars” as she tells him she is in love but not with Timothy, and “what happened for the next ten minutes was entirely personal to Noelle and John!” No bodice-ripper this!

Curiously, when John asks Noelle why she was all tied up in knots at the Yorke house if it wasn’t over unrequited love, she says, “John, dearest, I can’t tell you,” and that’s the end of it. Further, apparently at no point does Leoni ever learn a valuable lesson and tell Timothy the truth of her premarital adventures with Rory, and never discussed is the fact that Timothy has abandoned his life-long dream of practicing medicine in Africa. The transferal of Noelle’s affections from Timothy to John is not really satisfactory, either, since there is no description of her altering feelings when she is living with the Yorkes, or any of her altering feelings toward John, whom she has seen about once in the second half of the book before the fateful luncheon. Other than these oddities, and the dullness of the first half of the book, this is a fairly good story and reasonably fun to read, but don’t beat yourself up if you never get to it.