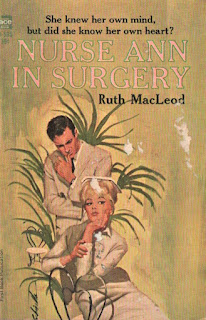 Ann Phillips returned to Crestridge with a whole new life ahead of her. She was going to start her career as a nurse-anesthetist, and she was going to marry Dr. Frank Parker, whom she had loved for so many years. But when she learned that while she had been away, Frank had decided to marry someone else, Ann buried her hurt by filling her life with her hospital work. Then, Frank came to her saying that he had made a mistake and would she renew their engagement. She asked herself whether Frank really knew his own heart … and besides there were whispering words of an exciting young intern warning her not to make a second mistake.

BEST QUOTES:
“Tears do have a way of invading the nasopharynx instead of rolling like pearls down a rosy cheek.”

“You’ll most likely marry before long and find you need your time to rear a family. At least I hope so—for your sake. That’s a woman’s highest calling.”

REVIEW:
Ann Phillips is particularly interesting in that she is a nurse anesthetist. Current-day CRNAs will likely appreciate the description of her job, which includes administering anesthetic as directed by the surgeon, which is curious because nowadays it’s the CRNA or anesthesiologist who makes that call, and also because she’s usually using sodium pentothal. Furthermore, she manually bags the patient—squeezes a bag every six seconds to push air into the lungs, a job today performed by a machine—for the entire surgery, which can last hours, and reports the patient’s condition aloud “every minute or so.” And with administering IV fluids and medications, and blood products when necessary, Ann’s got a lot to do!

But this pales in comparison to juggling her personal life. She’s returning home to fiancé Dr. Frank Parker, who is a rising would-be surgeon and son of brilliant chief surgeon Dr. Stuart Parker, for her first job since receiving her certification. “We’ve been engaged since he graduated from medical school,” Ann reports to one hopeful young man. “I haven’t seen him much since then,” which is at least two years ago. “Maybe he’ll have become a creep,” says the astute gentleman, who can read the writing on the wall better than Ann. Sure enough, on their first so-called date, Frank tells Ann he’s in love with the new OR nurse, Carisse Moffett, and breaks their engagement. It’s not hard to understand why, as Ann “could never compete with a girl like Carisse whose beauty was matched by her charming poise and grace.” None of which make you a good person, but values were different in the Sixties. In fact, however, Carisse is a lovely person who becomes very interested in Ann’s work and decides that she, too, will become a nurse anesthetist, and the two become friends as Ann takes her under her wing and helps her get started with applying to the training programs.

Frank, on the other hand, quickly proves he deserves neither the charming Charisse or the plucky Ann. He’s constantly bungling the more intricate surgeries, and when Ann expresses her admiration of an appendectomy he’s pulled off without killing the patient, she’s corrected by talented resident Dr. Robin Price. “It was a neat, workman-like performance,” he points out. “Exactly what should be expected of an intern on his first assignment. If a resident surgeon couldn’t perform that well he should be sent back to medical school”—and he concludes with the zinger that what could have been done in seven or eight minutes took Frank over half an hour.

Worse than that, Frank comes bumbling to Ann, pleading with her to take him back, that “I got off to a bad start—I’ve been all upset inside. That’s why I need you, darling! I’ve been all torn up inside and it affects my work. I need our love! Then I can settle down to the practice it takes to do good work.” Instead of vomiting, Ann, who seems to be driven more by the rush she gets when kissing Frank, succumbs, despite the disapproval of her entire family, and Frank breaks off his engagement with Carisse to take up with Ann again. It becomes clear that this yo-yoing is due in part to pressure from his family, although it’s not obvious why they object to Carisse when they’d objected to Ann as well. Carisse proves again to be the best person in the triangle and bears no grudge at all against Ann, and continues their friendship and works with flawless professionality with both in the OR.

Meanwhile, Ann demonstrates that at least professionally she has a spine. When her anesthesiologist boss suggests that she couldn’t handle open-heart surgery, she interrupts him to insist, “Oh yes I could!” And she suggests to both Frank and his father that he might be better suited for a different specialty, though both are equally outraged at the thought. Never mind that in one emergency surgery “Frank’s incompetence cost the man’s life,” and when her own mother needs a pacemaker, Ann talks her out of having Frank do the job. “He isn’t exactly incompetent,” she explains to her mother in ringing praise, but thinks to herself, “Thank God it was Dr. Stuart in charge—not Frank!”

Eventually Frank is called out for his dithering during a ventral septal defect repair and, finally at the end of his patience, he “snatched off his mask and cap and stomped from the room.” This enormous breach of aseptic protocol should certainly cost a surgeon their hospital privileges on the spot. When the operation is over, Ann rushes to console Frank, only to find Carisse has beaten her to it, so the motion-sick, tempest-toss’d ring goes bouncing back to Carisse, but not before Ann has again tried to set Frank straight. “You’ll ruin your own life and ours too, if you don’t grow up and make your own decisions!” she explodes—not to mention all the other patients he’ll maim or murder. “It’s time for you to quit behaving like a child”—though she could benefit from her own advice, as she’s never been entirely convinced that Frank’s return to her was completely honest. Ann’s scolding, apparently, is what it takes for Frank to tell his father what he really wants in both career and marriage, and “she experienced only a numb sense of relief that his feet, at last, were set on the right path”—and never mind that his finally making the difficult decision obviates her from doing the same.

In the end, she ends up not with a fiancé but with a solid prospect who is an excellent surgeon—illustrating another curious VNRN theme that the heroine never ends up with someone who is not good at his job. Would I love my husband less if he was lousy at his profession? It’s a curious question. Overall I’m slightly bothered that Ann is highly capable at work, and yet cannot demonstrate the same incisiveness when it comes to Frank, instead allowing herself to be buffeted by his storm—not to mention dumped twice! Otherwise, it’s an interesting book worth reading, and not just to admire Ann’s grip strength as she squeezes the ambu-bag 2,400 times in a two-hour surgery.