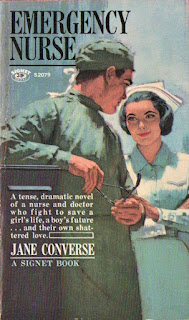 “You don’t  belong in a hospital! If you were honest you’d operate a beauty parlor.” Nurse Diane Waycott flung these bitter words at plastic surgeon Dr. Ken Michelson the night her mother died. Maddened with grief, she believed that her fiancé was more concerned with preserving vanity than saving life. But when a young girl, victim of an auto crash, was brought to Emergency with a bloody, unrecognizable face, Diane knew that only Ken could help. Only his sensitive hands could build a new life for this tragic girl—and for the desperate boy who had ruined her beauty.

BEST QUOTES:
“You can’t have a pretty face if there’s hate written over it.”

“That icy-tongued perfectionist is either going to make top-flight plastic surgeons out of us, or we’ll get the chair for bludgeoning him.”

“Good management is adaptable. Why consult an expert if you’re going to overrule his opinion?”

REVIEW:
Emergency Nurse hangs on the curious premise that Emergency Room Nurse Diane Waycott, engaged to plastic surgeon Dr. Kendall Michelson, has no idea what he actually does. But for the sake of this otherwise excellent book, I ask you to overlook this minor flaw. The issue is Diane’s prejudice against plastic surgery: “Never, in all the months she had loved him, had she been able to generate a profound, nurse’s respect for him as a doctor.” And when he drives her home from the hospital on the night her mother, who has battled cancer since her retirement (and therefore been unable to enjoy any relaxation), finally dies, she’s overcome by the injustice of it all. “Maybe just one more doctor might have made the difference!” she shouts at him. “Just one more man in a laboratory, or in surgery, might have found the answer a year ago, or five years ago, or ten. You might have found it! And she wouldn’t have suffered. She’d be alive!” Instead, she adds, “you’ll probably become rich bobbing the noses for show girls or eliminating the scars from some wanted hoodlum’s face. You’ll get ahead even faster if you gain a repaution for bust reconstruction!” Well, she’s not wrong about the boob jobs, but Ken is so outraged at this slur on his profession that he slams out the door, and when she never calls him to apologize, he never calls her either, so she’s single again.

Months after their breakup, an anonymous young car crash victim is brought in, and she and Dr. Paul Otis sew up her face, which has been badly cut. If the hospital knew who she was and whether her parents had money, they’d have called in Ken to repair the damage, but since time is a-wastin’, ED Dr. Paul Otis perfunctorily does the job. And when the bandages come off, the resulting scars are so hideous that her father, who turns out to be wealthy and powerful automotive parts magnate Harley Gilmore, screams in horror and is shoved out of the room while the young girl, Cammie, crumples into sobs. (In a later scene, Diane unprofessionally argues with Dr. Otis when he’s about to amputate three fingers of another unidentified accident victim, saying that the fingers might be saved, which gives enough time for the patient’s wife and doctor to arrive and save the hand.)

Diane’s kid brother Bud, who has been allowed to pretty much do whatever he wants after his mother died, turns out to have been driving the car involved in the accident, which Diane figures out not too slowly. Petrified that Bud’s life will be ruined by his leaving the scene of the accident—he had carried Cammie into a nearby house and called an ambulance, but then fled—she asks no questions, just hints to Bud that she’s aware of his role, and leaves him to keep skipping school. But her concern about Cammie slowly draws her into the girl’s care and life; Cammie’s widower father, a large, powerful, angry man, has refused to allow her to have any friends or even leave the house, and Diane is the only person who stands up to him, telling him that he needs to let go of his daughter if he wants to keep her.

Meanwhile, Diane starts dating stodgy Dr. Otis, who, now that Diane’s mother is dead and her brother is old enough to support himself, finds the prospect of marrying a woman with no dependents to support much more enticing. “Anticipating the question with which he would probably end the evening, Diane projected herself forward. Should a husband be chosen on the basis of flash-in-the-pan excitement, or eliminated because he didn’t convert every moment to a bell-ringing, physically tingling carnival of thrills? A marriage should be built on more solid groundwork. Paul offered a firm foundation for the future.” On the other hand, “No hour with Ken had ever been dull.” That old trope again!

Eventually Bud, eaten alive by guilt, finds his way to Ken and unburdens himself. Ken immediately tells Diane that Bud must go to the police in the morning, and Diane, disappointingly, has learned nothing from her first fight with Ken, and blames him for the ways of the world: “The day I see Bud hauled off to a cellblock, I’ll know you sent him there!” she screeches. Even after he’d just kissed away her tears of fear. So we have to wait a bit longer.

If the plot works out exactly as you know it will, it’s a most enjoyable ride. Diane and Harley Gilmore’s characters grow organically, as Diane learns more about Ken’s patients and as Cammie’s father Harley receives a few more hard truths from Diane. And the writing here is a step above the usual. There are inside jokes that pop up later, and author Jane Converse, who can be erratic, here is in top form. Of the four Emergency Nurse VNRNs in existence that I can find (see Anne Lorraine, Peggy Gaddis, and Rosamund Hunt’s mediocre offerings) this one has the best story—and arguably the best cover—of the quartet. If you have a few hours—maybe in an ED waiting room?—you could do a lot worse.