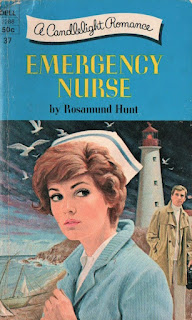 Amy Whiting came to Elsalock Island seeking escape. The young nurse had lost the doctor she loved to another woman, and wanted nothing more to do with nursing or with men until her painful emotional wound had healed. But fate had other plans. Her first day on the lovely New England island, Amy was pressed into service when a tragic accident filled the understaffed local hospital with needy patients. Soon Amy had won far more than the professional admiration of two handsome young doctors, and the vengeful jealousy of a stunningly beautiful yet strangely moody fellow nurse. Amy had only her heart to guide her through a maze of personal rivalries and conflicting feelings … the heart she had sworn never to trust again …

BEST QUOTES:
“Couldn’t do that. Couldn’t pick out one woman in the whole world and make her happy. Think of how many others I’d make miserable if I took myself out of circulation!”

REVIEW:
Amy Whiting RN has turned up on Elsalock Island, which is located off Cape Cod, vowing never to love again!!! Or nurse again, either, because even just being in a hospital makes her remember Dr. Alec Osborne, a boy she’d loved since high school and followed into medicine with the dream of working alongside him after they were married—except that he’d decided to marry someone else, the rat bastard! Amy needs a serious dose of coping skills. To demonstrate how destroyed she is, “she wore no make-up because she had lost faith in such things. Alec had rejected her for an older, plainer woman, and she was not interested in trying to make herself attractive any longer.” She’s also pretty shallow; did I mention that?

Anyway, after quitting nursing and life altogether, she’s going to hole up on this remote island in the cottage left to her by an aunt. On the ferry over, she’s taken up by a suave charmer, Peter Pepper, who regales her with humorous stories to such an extent that she hardly notices the two cops who are scrutinizing every male passenger exiting the ferry. “A guy could lose himself up here for a long, long time,” Peter observes. “He could hide out from the world, and his enemies would never be able to find him.” Nope, Amy doesn’t pick up that clue he’s putting down, either. Peter also finds the island attractive because it’s itching to raise money to build a new hospital, and he’s just the man to make all that happen, as long as he gets to put his name on the bank account!

But en route from the ferry stop, the bus she and Peter are riding on tips over, and all the injured folks are hustled off to the local hospital. Amy is not harmed, but she is instantly pressed into duty by mean old Dr. Dan Spencer, who hears Amy’s story and is not exactly impressed. “You decided to quit the profession that you only went into for selfish reasons of your own,” he sums up. “Didn’t it mean anything to you at all, except as a means to your own ends?” At least she has the nerve to answer, “I don’t think it did. It was a job.” Ah.

But with all these injured folks lying around, she does agree to help out, initially thinking it would be just for one day, but she keeps coming back, because she likes the patients, and besides, Dr. Aaron Moon is “the most impressive-looking man Amy had ever seen.” He’s Indian, of the Chackonee nation, which inhabits one end of the island. He and the charge nurse, Jeanne Halderson, are apparently desperately in love with each other, but for some reason—could it be his Indian heritage?—Jeanne is just nasty and brutish with poor Dr. Moon, so he dates Amy now and then.

Meanwhile, as Amy finds out that more and more folks who can’t really afford it are digging deep into their piggy banks to help the persuasive Mr. Pepper finance the new hospital, she starts to get uneasy. “Don’t get involved in something which isn’t your affair,” she eventually decides, and keeps her suspicions to herself. We’re lucky it’s just one con man, and not a band of international terrorists, that are hiding out on Elsalock Island. You will not be surprised to learn that Mr. Pepper and the money vanish on the same day, and the cops are not so pleased with Amy when they discover she had concerns all along. “Even though this crook was going around collecting money from everyone on the Island. You simply sat back and did nothing when, as you say, you felt that something was ‘wrong’?” Um, yeah, that about sums it up. Interestingly, we’ve met other VNRN heroines who minded their own business and allowed a baddie to get away with a crime (see Jane Arden Space Nurse), but she is not shamed for her stupid behavior the way Amy is.

So the entire population of the island stops speaking to her, except for the Chackonee people and Dan, but surprisingly, Amy sticks to the job she never wanted in the first place. She even decides that she likes Dan; “there was a certain ease between them, as thought they had known each other for years. There had not been the strain, as there sometimes had been with Alec, of being bright and witty in order to hold his attention.” Because if one man hasn’t worked out, we just have to be informed that the fellow wasn’t all that awesome to start with, that it wasn’t really love that she felt, that it didn’t count for anything.

In the end there’s another disaster, a hurricane this time, and by the end of it, Amy is finally seeing the shining light of Florence’s lamp: “She had found the satisfaction of hard work, of service, of helping and being needed as she never had before in her life. Before, nursing had been to her only the means to an end, something impatiently learned for a selfish purpose. … Words like ‘serve’ had had no part in her life until she had come to the Island, in spite of her glib recitation of the Florence Nightingale oath.” It’s nice that the author bothered to try to give her character some personal growth, but it’s mostly told to us, not shown, unfortunately.

The book ends completely as expected. One big disappointment comes when Amy has just realized that she loves Dan as he is driving her home. He asks her what she’s thinking about, “and, of course, she could not tell him. She could not even turn her head and meet his eyes.” It isn’t until he puts his arm around her and tells her that he has feelings for her that she is able to reach for him. I’ve been realizing lately how passive all these heroines are romantically, how in the end, it is almost always the man who makes the first move. No matter what we’ve been sold throughout the pages about the heroine standing on her own feet and taking ownership of her life, she still can’t extend a hand or face toward a man she loves until his answer is assured. Weak and hypocritical is what it is. The only “plus” in this book is that the Indian community was treated respectably, with honorable, hardworking characters who don’t talk much, of course, but who stand by Amy when Peter runs off with the loot. It’s not much, but with Rosamund Hunt’s Emergency Nurse, we’re not given much, so it’s best to just take that small token and close the book.