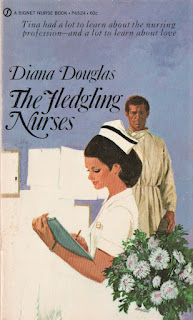 “Tina,” John whispered, “I’ve never seen you the way I’m seeing you now.”
“No? I guess you never bothered to look,” she answered. Any second now he was going to kiss her, and most girls would give anything to have such an attractive man look at them as he was looking at her now. But all Tina felt was a diminishing satisfaction that John’s date Dell would see them—that what Dell would feel would be payment for some of the dirty tricks she’d played on Tina at the hospital. John’s kiss was passionate and very, very exciting—too exciting. For when Tina saw Dell staring at them furiously, she knew that what had started out as a simple act of revenge might signal the beginning of a love that would threaten all of them …

BEST QUOTES:
“Inside this hospital, nurses do not run even in an emergency. Running promotes panic. In patients as well as nurses. Remember that.”

“‘Sometimes it’s like that with people,’ he said. ‘You just look at one another and you vibrate.’”

REVIEW:
Tina Lambert, a second-year nursing student, hates her fellow student Dell Blandon with a burning passion. Dell, who’s at the top of their class, is always ratting out Tina, who is somewhere at the bottom. Tina’s problem is that she has mixed feelings about nursing, mostly stemming from her mother, who is director of nursing at a hospital in Berkeley, California, across the bay from Bayview Hospital, where Tina is a student. “My mother’s more than a trial—she’s a conviction, too,” Tina gripes, adding that it was her mother’s idea that she become a nurse. Honest and self-aware, though, she admits, “I wanted to be a nurse. But I wanted to make my own decision about it, that’s all. I didn’t want to be taken by the ear and led into a nurse’s uniform. Would you?” No, I wouldn’t, and it explains Tina’s attitude and mixed performance as a student.

One evening Tina and the gang and their men friends go to a club—“It’s now, it’s wow, it’s the Rainbow Pad,” and I laughed for about ten pages at the wild, swinging hippie scene with hypnotic, psychedelic lights and a “depth-perception machine,” whatever that is. Unfortunately, Tina is not able to “swing your hang-ups away!” and instead decides to wreak her revenge on Dell by taking away her boyfriend, John Small. Unfortunately, it’s not very difficult, as John seems too eager to kiss Tina from the moment he lays eyes on her. She lets him do it as she sees Dell exiting the ladies’ lounge, and Dell, furious, leaves the club with Stanfurd playboy Peter Spain. That night, Tina hears Dell sneaking into the nurses’ dorm way past curfew and cry herself to sleep, and—too late—she starts to feel remorse. But it proves difficult to drop John, who now is hypocritically angry with Dell for dating Peter. Eventually, trying to get Dell to go back to John, who Tina is sure still loves Dell, Tina comes completely clean to Dell, in her startlingly honest way. Dell, not very surprisingly, is devastated and humiliated, and thinking that she’s lost the man she loves forever, walks out of the hospital when she should be heading for class.

The next 40 pages devote themselves to a long, drawn-out, day-long hunt all over San Francisco for Dell, ending with Tina, John and two friends driving through the thick fog (you knew the fog would make an appearance at some point) to track her down—only to end up in a car crash, and wouldn’t you know it, the car they hit contains Dell and Peter! Tina, who’s been a hit-or-miss student—though we do hear she’s especially strong on the first aid exam, in a bit of foreshadowing—saves John’s life while the other two student nurses go to pieces, and when the victims are finally wheeled into the ED doors, Tina wins the admiration of chief surgical resident Dr. Roger Carr.

Eventually everything is tied up, but not before Tina pulls a half-hearted Dell maneuver herself and runs into the park after dark and is nearly assaulted before Roger shows up in the nick of time, in a perfunctory 2½-page adventure that feels insulting to the reader. Overall it’s certainly not author Richard Wilkes-Hunter’s worst, which can be pretty bad (see Resort Nurse, Nurse Deceived, Mystery Nurse, and Surfing Nurse, to name just a few—he has definitely earned his berth on the Worst VNRN Authors list). But here he has given us a short story stretched yawningly into 125 pages, and we can’t avoid Wilkes-Hunter’s trademark awkward references to Tina’s “firm breasts” and the shower in which she is “letting the warmth pour down over her smooth young curves,” which make me feel like a creepy voyeur. But Tina is a forthright, insightful, admirable young woman who learns from her ability to perform under pressure that “if I can do that once, I can do it again, can’t I? I mean, I can help people who need what I am able to do for them.” It’s a rarity for Wilkes-Hunter to give us such a feisty and enjoyable heroine, but after wading through 13 of his other books and finding them overwhelmingly to be duds, I am glad to have met her.