The Odds Against Nurse Pat 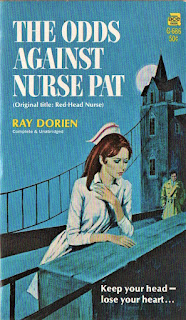 
Nurse Pat Merriford’s friends said the fire that inflamed her red hair sparked her impulsive personality. For Pat’s impetuous nature gave her a talent for landing herself in difficulties. Luckily, Dr. Kent Willerby had always managed to protect her from being burned. Yet Pat wished that Kent’s protective attitude would change to something more akin to the love she felt for him. Then Janet Westbrow came to work at the hospital. For the sake of loyalty, Pat found herself defending this girl she disliked; one, furthermore, who seemed determined to win Dr. Willerby for herself. To make matters worse, Pat found herself professionally opposed to the doctor she could never stop loving.

BEST QUOTES:
“Even our best patients think there’s nothing to be done for men except smooth their pillows and hold their hands while they make love to us.”

“I don’t think that is quite the way for a respectable doctor to behave in a telephone booth.”

REVIEW:
Nurse Pat Merriman is the usual impetuous red-haired nurse who is running afoul of the cute but imperious surgeon Kent Willerby at every turn. Then one day, after a bad day in the OR with him, he actually speaks to her, to tell her that “a few words of blame don’t matter. Cheer up.” And with that, “the man she had admired from a distance, almost with a touch of schoolgirl hero worship, was human, approachable. She loved him then, impulsively, foolishly, hopelessly, from that moment.” He’s still quite cool, of course, so I don’t know how “approachable” he actually is, but he does give her the barest of hints that he has feelings for her—a ride home from the farewell party and a kiss on the lips—before he sets off for a year on an expedition to Antarctica, a voyage her brother Tom will coincidentally be making as well.

A year goes by in a few pages, and Pat is half-heartedly dating Dr. Lee Gauntley and shepherding socialite Janet Westbrown through the first year of nursing school, when Janet quits and goes to South Africa to welcome home the adventurers—and there becomes engaged to Kent. Upon the team’s arrival in England, however, there’s a bizarre and poorly explained accident in which Kent, carrying a heavy case of instruments, fell into Tom, who “hit the bulkhead” and now is paralyzed from the waist down. He’s pretty glum about it, naturally, and it turns out he’d fallen in love with Janet in South Africa—though honestly if you’re going to fall for something you’re better off with the bulkhead than with shallow, materialistic, selfish Janet—but there’s the heart-of-gold physical therapist to tell him off and set him straight, not to mention back on his increasingly sensate feet!

In the end, Lee asks Pat to a weekend house party at his sister’s, and here we spend a lovely few days with good food and company and dogs and charming children, and Pat and Kent reach the understanding you knew they would, but not without a crisis—Janet’s gone missing, and every character in the book is out looking for her, but Janet’s not the kind of gal who is ever short of a man or three, so you know she’ll land safely on her Jimmy Choo’s.

This is a fairly typical VNRN, but the party at the ending is rather sweet, as is the rapprochement between Kent and Pat, even if the kerfuffle about the “missing” Janet is overly manufactured. The writing can be charming, as when newly secure of Kent, “even Pat’s hair seemed to be of a brighter color.” If it’s not the greatest of the nurse novels, odds are you’ll find Nurse Pat a perfectly pleasant afternoon companion.