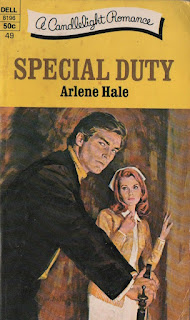 When Dr. Taylor assigned her to special duty, lovely, auburn-haired Margo McKim felt a sense of pride—and also relief. Perhaps if she poured all her energy into her work, there would be no time left to brood over a love that was lost … but not forgotten. But the assignment only created new problems. Because the patient was famous folk singer Jedd Buckley, the case was kept secret. And his illness itself was shrouded in mystery. What had really caused Jedd’s breakdown? Why was his manager Steve so hostile towards Margo’s help? Why had the handsome, cool-headed Dr. Taylor insisted on her for assignment? Whatever mysterious motives lay behind this case, it was soon no secret that Jedd, Steve, and even Dr. Taylor all were looking at Margo not only as a nurse … but as a woman. She had thought that work would help her run away from love—was she actually running towards it?

BEST QUOTES:
“Being late is just a form of being dishonest, you know.”

REVIEW:
Dr. Alex L. Taylor has just relocated to White Hill Hospital from Topeka, Kansas, and the man “has a way of walking by people as if they were sticks of furniture. Did you ever see him smile? … It was inconceivable that he knew any of them by either their first or last name. They were simply women in white. When he wanted one of them, he crooked a finger and expected her to follow obediently behind him, do what he ordered.” Naturally, every nurse in the place is hot for him.

Except for Nurse Margo McKim. Sure, he’s handsome, but “that holier-than-thou attitude is for the birds,” she thinks. So she’s the one he calls up, arrogantly insisting she meet him at the Oasis Club, to discuss a private duty job he wants to hire her for. He’s got a top-secret patient whose “nerves are shot,” or so the official diagnosis goes. “You have a good figure. You’re also a pretty woman,” he says to Margo. “Just exactly the kind of nurse I’m looking for.” He even asks her if her auburn hair is real, if you can believe it, which of course is what makes for a good RN.

She agrees to take the job, which is to nurse rising folk singer Jedd Buckley out of his stupor. Manager Steve Ryan is extremely concerned about Jedd’s mental health: “You’ve got to have him on his feet in time for Dick’s Discotheque opening,” he insists. “Big deal. Big money. Big publicity. You’ve got to have him ready for it. He sure isn’t ready to crack up! I can just hear what talk that would cause—he might even lose some juicy contracts.” How sweet!

Almost immediately after arriving at Jedd’s mansion, she regrets taking the job when Steve snaps at her, “What I say, goes. And whether you agree or not, I know what I’m doing, and I know what’s best.” But her reward, outside of a big paycheck, is that Dr. Alex is going to see her every day, and he ends his first visit with a kiss. “I’m not just a cold fish after all. There’s hot blood in my veins,” he tells her. So hot that he starts their first real date by assaulting her in the car. She slaps him, and “he reached for her again and he kissed her until she struggled free.” She jumps out of the car and starts walking back to the house, but Alex says he’s really sorry, so she gets back in the car, they have a lovely picnic, and she kisses him back for real when he drops her off at the end of the day. I really don’t understand why it’s so common in VNRNs for women to end up dating, often happily, a man who’s assaulted her.

Back at the mansion, Margo slowly warms up Jedd, whose recovery is aided by numerous pills, because “tranquilizers will help him get a grip on himself.” Eventually he opens up enough to take her on a walk in the woods to meet Zeke, who is the father of a woman he’d been in love with back home, but whom he’d left behind to be a star. Of course, it’s obvious that Sallie Mae is the reason why Jedd has gone into this funk, but it takes everyone else 75 pages and a crisis in which Jedd grabs a rifle and holes himself up in a cave to figure this out.

At this point in the book, everyone, including Jedd’s oldest friend Charlie, who has stood by him through it all, is revealed to have had a fiscally related motive for pushing Jedd to succeed as a performer. Even Margo falls into the pattern of treating Jedd like a show pony who just needs to be whipped a little harder when she tells Alex, “Jedd shouldn’t be allowed to throw in the towel on his career. He has far too much to offer!” Curious that in all this book, no one once asks Jedd what he wants, even in the explosive crisis.

Thank goodness, though, for Nurse Margo, who runs up to the cave with Jedd’s bullets whizzing past her ears to tell him that she’s directed Steve to fly to Tennessee and pick up Sallie Mae on a chartered jet, so hadn’t he better get back home and shave? Everything is quite predictable after this point, though to be honest, it was predictable from the first mention of Sallie Mae’s name. For Margo’s love life, there is a limp red herring in the form of Steve, who has a turn at assaulting Margo and then asking her to be his girl. She mulls it over for about three seconds, and spends twice as long considering Greg Walters, the first man she ever loved, who broke her heart and rendered her an iron maiden, and who makes no actual appearance in the book. But in the end she’s cured of her frigidity as easily as Jedd is cured of his dystonia and homicidal ideations. All you need is the right person in your life!

It’s more than a little disconcerting that not one person in the book puts Jedd’s well-being above his potential as a star; we never hear a single word from Sallie Mae, so we have only the fact that she’s from the sticks and knew Jedd before he was successful to vouch for her character. But Charlie had those same credentials, and look how he turned out! As Jedd pulls himself together and wows them at Dick’s, all the leading players in his crackup express remorse at how selfish they’ve been, but it rings false to hear their regrets only after their own admittedly juicy slice of the pie has been reassured.

The treatment of Jedd in this book as a commodity to be jollied into giving up what everyone wants is not far removed from how the men treat Margo, so that’s a disturbing narrative twin in this book—again, not something that’s ever discussed. The story and the writing are ordinary and serviceable, neither being especially interesting, and the characters are no better. Arlene Hale is not my favorite writer, having garnered a less-than-C+ average in 21 reviews, and unfortunately for me, she was as prolific as she was ordinary. So if it is my duty to read her books, they are seldom special, and Special Duty is true to form.