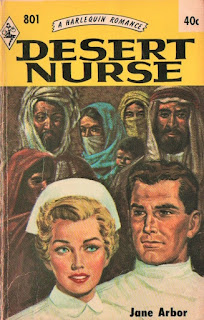 After the break-up of her romance with Greg Ryder, Nurse Martha Shore decided that the best thing to do was to find a new interest, which she did with a vengeance when she accepted Doctor Jude Tarleton’s offer of a past at his tiny hospital east of Aden. She had successfully managed to jump out he the frying-pan. But did her new job, in the burning desert heat, not ominously resemble the proverbial fire? For it was not long before Martha had to admit her love for Greg was forgotten in her new, overwhelming attraction to Jude—an attraction which he made it clear was not returned. How could she hope to appeal to him, anyway, when the experienced and glamorous Naomi was already so firmly in the picture?

BEST QUOTES:
“That’s how feeling needed does take one, I think—grateful for the chance and set-teeth determined to be worth it.”

REVIEW:
I had been dreading reading Desert Nurse, and with good reason, given the VNRN genre’s track record with foreign peoples, and the cover illustration was not very encouraging. But I am happy to report that Jane Arbor has here drawn a portrait of Saudi Arabians as being different from the English, of course, but no less honorable or dignified. Nurse Martha Shore, who in fact has spent some time in the area as a child and speaks some Arabic, returns for a one-year stint at a hospital supporting a rural (can that word be used with a desert?) community and a team of Brits attempting to strike oil under the auspices of Dr. Jude Tarleton—and her reason for doing so is the dissolution of her engagement to Greg Ryder, a pilot who prefers to marry the rich daughter of his intended employer instead of our steady, honest, plucky heroine.

Given that beginning, you can easily deduce the bones of the story that follows, including Greg’s crash landing at the settlement and insistent efforts to take up again with Martha—his fiancée had left him when he’d carelessly let fall to her father that he’d considered his daughter “good company and a looker, and if she was the price of her old man’s backing, that was all right.” Martha is no longer interested, but the big question here is why she would ever have had anything to do with the shallow, conceited ass for a minute, much less be engaged to him for a year. The usual misunderstandings between her and the camp’s doctor, Jude Tarleton, unfold, but there are side stories demonstrating Martha’s strength and pluck to amuse us—even if she does have a tendency to fall (sometimes literally) into scrapes form which Jude must rescue her.

The plot holds no surprises, but the writing is pleasing and we are treated to multiple interesting peripheral characters. I was even actually convinced of Martha’s feeling for Jude, “a secret madness that didn’t show” no matter how intensely she feels when their hands brush. The final conversation reconciliating their misunderstandings went on for far too long and could easily have been cut altogether: As Frank Capra said of the scene in “It’s a Wonderful Life,” when Donna Reed and Jimmy Stewart skipped a page of the script in their first and only take of the scene in which they kiss, “with technique like that, who needs dialogue?” A thin plot, though it might keep a book out of A-range grades, is not a big drawback in a VNRN, and the rest of this book is charming enough to make it a welcome oasis in a too-often dry genre.