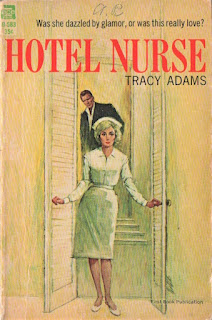 When pretty nurse Kay Mercer agreed to take a part-time job at the luxurious Hanes hotel, she found herself in a new world. Here, in the plush, elegant hotel was a way of life so gay and glamorous that it seemed to have everything she had missed in the grim halls of Deepwood Hospital. And there was handsome, gifted young pianist, Johnny Riels. He wanted to make this Kay’s world too. But could she forget the life she come to know and understand at the hospital? And how about the young doctor who had broken her heart?

BEST QUOTES:
“The day she had to work to hang on to her guy, as Madge said would be the day she’d turn in her womanhood badge.”

“They were all like this man during the first few hours in a hospital, apprehensive, suspicious as to what was being done to and for them, and afraid, terribly afraid unless they were well informed. And few patients are well informed, Kay often thought, because it’s easier not to know the truth sometimes.”

“I’m going to do a few tests, find a fancy name for what you’ve got and then send you a bill.”

“What the hell kind of nurse are you anyway?”

“Why don’t you try to hang onto yourself until your doctor completes his tests?”

“‘I’ve got things to ask you, Nurse,’ he said. ‘Like what to do about blood pressure when a guy’s kooky about a girl and all that!’”

“‘I’m a nurse.’ It was more than a word; it was a badge; it was honor and duty and love and fulfillment for any woman.”

REVIEW:
Kay Mercer RN is, in a word, stubborn. This can be a useful trait, as it was for our poor orphaned heroine, but she calls it “pride”: “You have to have lots of pride to wear hand-me-down clothes, to go to high school without extra money, and more pride to borrow from a girlfriend for lunch hoping you’d get a baby-sitting job to pay it back. Kay’s determination to get an education, to enter nursing school and graduate had also been sustained by her pride and the wish to not give into [sic] circumstances but to fight and get what she wanted most out of life.” And one of the things she wants most out of life is Dr. Mark Bell. We don’t really get to know Mark, because the first time we clap eyes on the alleged heartthrob, he’s squiring TV starlet Penny Adair, who is doing research for her upcoming role as a nurse, around the hospital.

Unfortunately, in addition to stubbornness a.k.a. pride, Kate is also mighty jealous. This portends an ominous future for the lovebirds. Mark is so busy showing Penny around the hospital that he’s not free to talk to Kay about a part-time job she’s been offered: Her friend Ruth, who is heading off for six-week (!!!) honeymoon, is desperate for Kay to fill her part-time nights-and-weekends job while she’s away or she’ll lose it. Working for a 1,100-room hotel with a full medical staff—what mega-luxury hotel is complete without an operating room?—is not all glamour; “A guy in the kitchen whacks off a finger, we have to be there to pick up the pieces.” Literally.

Kay, won over by the allure, wants to take the job, knowing it will bring in extra money so her little sister Betty, in college and with a part-time job herself, could quit working and focus on her studies. But Mark’s reaction to the news of her six-week gig is that of a possessive lout; he implies that he will mention her moonlighting to the director of nursing, who might kibosh the deal, and adds, “I don’t like you fooling around some hotshot hotel. I have a little enough time to be with you; this means I’ll never be able to make a date with you.” Kay immediately spots his hypocrisy, thinking, “last night he’d been busy with Penny Adair or when they might have had that hour or so together. It was all right for him to take on extra-curricular activities such as Penny Adair, but not for her to do it!” The snarky remarks tumble from her lips, and half a page later, she’s storming off and he’s not following after her. Or calling, or dropping by her apartment, or speaking to her in the hospital hallway. “Stubbornly, however, she clung to the thought that in this instance she was right and he was obstinate.” Which doesn’t help as the days go by.

What does help, however, is for meeting the hotel’s piano player, Johnny Riels. Johnny regularly presses Kay into a corner table with a cocktail after work while he performs for the lounge crowd, then takes her to tiny, exclusive jazz club until 3:00 a.m. This is not a woman who believes in sleeping. But the glamour of it all! “Kay heard music such as she had never heard, improvised music, sweet and low, sad and haunting. There was jazz that tingled, and time was forgotten as the men played because they loved every sound and every tone that came out of their instruments.” So she decides, “From now on it was going to be glamour and excitement and Johnny by her side.”

Eventually Mark turns up at the lounge to see Kay, for the first time they’ve spoken in five weeks, and proposes marriage—though he still has to live at the hospital, for some reason, for another six months, until he finishes his residency. He plunks a ring on the table—and then Johnny comes over and kisses her on the mouth. Mark, not surprisingly, decides to head for the door. “Let him go then; let him stalk off like a spoiled brat,” she thinks to herself. “What had he to offer her, ever? Waiting, hoping, planning and then who was sure they’d ever get married? Who could be sure Penny wouldn’t come into the picture again and make him change his mind?”

It seems unlikely this will happen, given the genre, and equally unsurprising is that calamity that strikes—but here, unfortunately, the calamity is that a small plane has crashed into the building. In the post–9/11 world, it’s PTSD-inducing and, less importantly, unrealistic; the floor where the plane has crashed is still largely intact, with just a small fire, and the pilot’s body is undamaged enough to determine that it’s dead. This scene also a study in what not to do in a mass trauma situation; the hotel doctor focuses on a woman with a broken leg and worries about a blood clot instead of concentrating on victims who might die if not treated immediately. It’s over in two pages, though, and the hospital MD prescribes for his staff, passing around paper cups of brandy and saying, “Chuck-a-lug and that’s an order.” He’s not the only one: Mark shows up at her apartment and tells her, “It’s time I stopped being patient with you and started giving orders,” he says, though I don’t think the cold shoulder counts as being patient, and don’t get me started on the “giving orders” bit. Instead of slapping him, Kay says, “Mark, I was just going to say the same thing.” Any esteem I might have had for Kay melted away when she tells him that while she had been working on the crash victims, “I even prayed you’d come charging in, like they do in the movies, or the Penny Adair television things, you know? Then you’d rescue me and we’d cling together.” Except that she was a rescuer, not a victim.

Though she’s eager to be saved—and ordered around—by her man, when Johnny shows up and tells her to quit her job and marry him, she’s not convinced. “I don’t dig that medicine jazz, sweetie,” he says, adorably. “I want my woman warm and soft and smelling of perfume, not antiseptic. I want you to kick the habit and come out to the west coast with me. I can give you plenty to take care of—me.” As appealing as his language is, she tells him she’s “from another world” and slips out of the club while he’s playing a song for her, deciding that for him “love was as make-believe as the tinsel decorations,” which seems heartless and convenient.

Overall, it’s not a terrible book. Even if she shows no growth of her character during the story, Kay is a strong, independent woman—well, up to the end, anyway. The book demonstrates a lot of respect for the nursing profession, and the writing overall was pretty good. This seems to be the last of the three nurse novels written by Sofi O’Bryan (see also Washington Nurse and Spotlight on Nurse Thorne), both in terms of chronology and in reviewed books, and I am happy to report she’s going out on a high note.