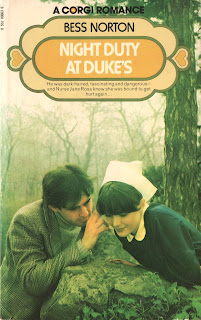 Nurse Jane Ross had any irresistible charm that few men couldn’t ignore. But in James mind there was only one who really mattered—Geraint Owen the fascinating new doctor who had set all the nurses talking. But there was another manner life: The tall, quiet Dr. Barney Madders, who secretly loved her, with no hope of that love ever being returned. The unpredictable events which fill a hospital taken suddenly, finally turned the course of love, baring some hearts and breaking others … as Jane found out when the truth about Geraint and Barney finally came into the open …

BEST QUOTES:
“I get sick and tired of saying ‘yes, sir,’ and ‘no, sir,’ and ‘really, sir?’ There are times on days when I yearn to wreck a consultant’s round by saying something quite different. Such as ‘what a load of tripe’ or ‘I couldn’t care less’.”

“And I suppose you don’t even know whether it was a long big boy’s coat or a short, scum-of-the-earth variety?”

REVIEW:
I hope everyone has, at least once in their lives, experienced the electricity sparking when that certain someone’s hand brushes your arm. Nurse Jane Ross is lucky enough to have known it twice—with the same man. Dr. Geraint Owen was Jane’s first love, when she was 19, four long years ago. “I had tied his gown for him, and the first touch of his skin against my knuckles as I did it had shaken me as much as if I had touched an electric wire,” she recalls. The pair had been an item—and a very public one, subject to a lot of talk—and, apparently stung by the gossip, “he had walked out on me, halfway through my final year” in her schooling she explains, and since then “he had made no attempt to get in touch with me.” Until the day she runs smack into him on the ward of Duke’s, the hospital where she now works, and instantly he’s pulling her into the linen closet or onto park benches conveniently shrouded in rhododendrons, and her knees are in a near constant state of jelly.

The problem is that the man is a cad, and is messing around with another nurse, who is only known to us by her last name, Fetterby—as are more than half a dozen other nurses in this book, unfortunately. Jane’s best friend Theo Jacques, a black woman from Jamaica—something of an anomaly in VNRNs—is a hard-working, honest and true friend, but as Jane repeatedly rebuffs Theo’s efforts to put Jane wise to the rumors running around the hospital, the old chums become increasingly strained. “I know what you’re trying to tell me,” Jane huffs, thinking Theo wants to talk about Fetterby. “All right. It isn’t important. It was just one of those things.” It’s clear that Theo has more to tell than that Geraint’s been parking with another woman in his off hours, but Theo just gives Jane a cold stare and turns away.

Jane has another friend, Dr. Barney Madders. “We’d carried on a comfortable brother and sister relationship for three years,” she says, so she’s the only person who is surprised when Barney finally tumbles out, “I love you. I’ve always loved you. I’ve waited, and waited, and waited. I don’t think I can go on very much longer.”

Most of the book involves Jane’s patients, and a nurse who falls into a mine and has to be rescued, and of course there’s the Rugger dance to attend in our finest ball gowns. Throughout we have author Olive Norton, here writing as Bess Norton, penning her usual fine prose, if perhaps not as laugh-out-loud funny as she has been in other books. It’s not the most interesting or captivating book she’s written; as much as I sympathize with Jane’s passion for Geraint, she’s hopelessly blind about him, which becomes a bit frustrating, especially as she becomes increasingly mean to her devoted friends Theo and Barney. But even an “average” book for Olive Norton is better than many authors’ efforts, so you have my blessing to go on night duty at Duke’s.